Other winners in the music categories included composers Ludwig Göransson, Carlos Rafael Rivera and Blake Neely; Music supervision honors went to Ciara Elwis and Matt Biffa for "I May Destroy You." 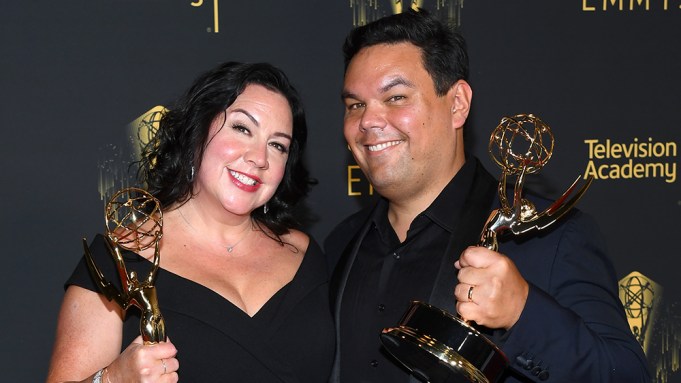 Oscar-winning songwriters Kristen Anderson-Lopez and Robert Lopez won their first primetime Emmy Sunday night for their popular “Agatha All Along” song from Marvel Studios and Disney Plus’ limited series “WandaVision.”

The collaborators, whose Academy Award wins include Disney’s “Frozen” and “Coco” movies, won in Emmy’s music and lyrics category, beating out tunes from “The Queen’s Gambit,” “The Boys,” “Zoey’s Extraordinary Playlist,” “Bo Burnham: Inside” and “Soundtrack of Our Lives.”

“Agatha All Along” shot to No. 1 on iTunes’ soundtrack chart after it appeared in the series’ penultimate episode, explaining the role that devious witch Agatha Harkness (Kathryn Hahn) had played throughout the unraveling mystery of the town of Westview.

Anderson-Lopez, in accepting the award, said she and her husband hadn’t been in Los Angeles in 21 months and “every return to normalcy should come with a big party and a shiny statue.” She called the “WandaVision” track “a dream come true for us to write.” Backstage afterwards, Lopez said that the song was written prior to shooting but that Hahn “brought it to the next level, and then another level, and another.”

The couple had been Emmy-nominated twice before, for “The Oscars” and “The Comedians” in 2015; Lopez had earlier been nominated, in 2007, for a song in “Scrubs.” Lopez’s two Daytime Emmys helped him gain EGOT status in 2014; Anderson-Lopez still needs a Tony to claim EGOT status.

Among the Television Academy’s other music honors: Ludwig Göransson won his second consecutive Emmy for scoring “The Mandalorian.” This year’s Emmy was for the second season finale, in which The Child (aka Grogu) is rescued and turned over to Luke Skywalker. Göransson won a 2018 Oscar for his music for “Black Panther,” which coincidentally was about to be performed live-to-picture by the Los Angeles Philharmonic at the Hollywood Bowl when the Emmy was announced.

Carlos Rafael Rivera also won his second Emmy. This time he took the trophy for composition for a limited series, movie or special, for Netflix’s “The Queen’s Gambit.” His theme for “Godless,” for the same filmmaker, Scott Frank, won an Emmy in 2018.

For the Miami-based composer, the Emmy win is just the latest in a series of awards for “The Queen’s Gambit” – he has already received awards from the Society of Composers & Lyricists, GoldSpirit, International Film Music Critics and Hollywood Music in Media, for his acclaimed, classically styled score.

Blake Neely won his first Emmy for his clever, all-percussion main title theme music for HBO Max’s “The Flight Attendant.” A previous nominee for such shows as “Everwood” and “The Pacific,” he is a veteran television composer who currently writes much of the music of The CW’s superhero shows including “Supergirl” and “The Flash.”

Comedian Bo Burnham was an upset winner in the music direction category, beating out Billie Eilish and David Byrne specials along with the Biden inauguration and “Zoey’s Extraordinary Playlist.” Burnham wrote and sang 20 original songs in his “Bo Burnham: Inside” pandemic show for Netflix, effectively acting as his own “music director.”

The music supervision award went to Ciara Elwis and Matt Biffa for their work on “I May Destroy You.” Both first-time nominees, they chose songs to illustrate the fantasies of Arabella (Michaela Coel) in the final episode of the HBO series.

Earlier in the afternoon, British composer Steven Price won his first Emmy for music in a documentary series or special for Netflix’s “David Attenborough: A Life on Our Planet.” The Oscar winner (“Gravity”) had previously been Emmy-nominated (twice, for main title theme and docuseries or special dramatic score) for another Attenborough nature documentary, 2019’s “Our Planet.”