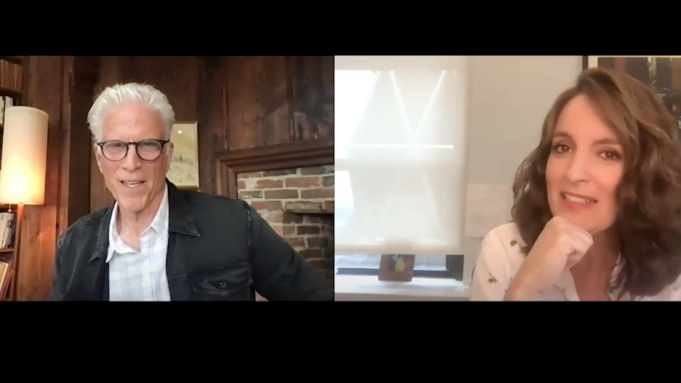 It was one of Ted Danson’s daughters who gave him perhaps the best perspective on his “Cheers” role, Sam Malone. “He was the reformed alcoholic in a bar,” Danson says of his ironic character. “He was always alone surrounded women one after the other, but always alone. One of my daughters, when she was five, said, ‘why is your character’s name Sam Alone?’ And it was like, Oh, that’s good. That’s good, I hadn’t thought of that.”

Danson recently discussed his career, including his new NBC series “Mr. Mayor,” with Tina Fey for Variety and NBCUniversal’s Virtual FYC House. In a rare public conversation between the two comedy titans, Fey — who is an executive producer on “Mr. Mayor” — grilled the American treasure on how he wound up with such a unique career, what he likes about paying Los Angeles mayor Neil Bremer on the sitcom, and other rapid-fire questions that only Fey could ask.

“I do know that I have always loved comedy that had a core of sadness or something real and human that is sweet and funny, but sad,” Danson said. “And most of the writers I know who are these bright, wonderful, crazy, brilliant with a core of sadness in them. And that attracts me, I love that. And I love drama, like Damages, or Fargo, that is funny.”

Why did Danson, coming off “The Good Place,” jump so quickly at another show? Danson told Fey it was because of her and producing partner Robert Carlock.

“You are my boss and I, you know I am a sycophant at heart, but that is also the truth,” he said. “You and Robert, your credentials were such that that I wanted to be part of that. And I think I learned somewhere along the line that instead of having somebody build a show around you or pay you huge sums of money or whatever, make sure you find the most creative people in the room and then ask nicely if you can be part of what they’re doing.

Fey returned the compliment, noting that Danson and Holly Hunter, who plays the mayor’s foil, deputy mayor Arpi Meskimen, “keep us honest… we try to police ourselves and be like, ‘this joke, let’s bend it, but not to the point of breaking’ is what we’re always hoping for. And I think you guys have a great way of, you never say, ‘this is nuts!’ But you all ask good questions to help justify what’s happening or to understand what’s happening. And sometimes the questions make us go, ‘oh yeah, this is nuts.’”

Fey said watching “Cheers” while growing up inspired her in writing ensemble, workplace comedies. “What we were striving for was to have a workplace comedy that happened to be in what turned out to be one of the most difficult arenas to try to be funny about in 2020, 2021, the big city government,” she says. “But to try to create an ensemble of characters that we just want to spend time with. I just want to make a group of people that you want to see those people be together in this space.”

Later, Fey asks Danson a variety of questions, including: What “Ted Lasso” star Jason Sudeikis can do that Danson can’t; the awkwardness of his fictional “Curb Your Enthusiasm” character Ted Danson divorcing his real-life wife, Mary Steenburgen; how he prepared for his dance in “Body Heat”; and favorite Cheers guest star.

Watch the full conversation at Variety and NBCUniversal’s Virtual FYC House, which is currently live and ready to visit. Content in the house also includes the reunion of two beloved NBC characters, Mariska Hargitay’s Benson and Christopher Meloni’s Stabler from the “Law & Order” franchise, as well as panel conversations with producers and artisans from some of the top shows airing on TV.

Additionally, NBC has re-created a virtual version of their iconic tram tour where you can find exclusive content from “This is Us,” “Zoey’s Extraordinary Playlist,” “The Voice,” and “Top Chef,” to name a few. Throughout the month new, never before seen content is being added to this site, including the Danson/Fey chat.