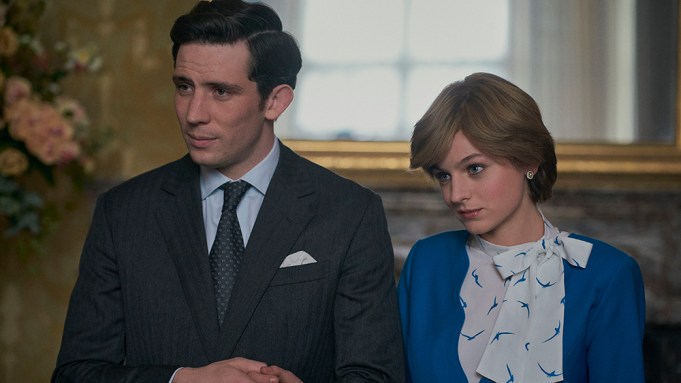 The “Schitt’s Creek” victory tour continued on Sunday night at the Golden Globes — but up-and-comer “Ted Lasso” also got its first taste of what will likely be many awards this year.

The biggest winner of this year’s Golden Globes had to be Netflix, of course, as the streamer’s “The Crown” won best drama and four awards overall — the most of any program — while “The Queen’s Gambit” landed limited series honors (and a limited actress win for star Anya Taylor-Joy).

That helps continue to propel “The Crown” and “The Queen’s Gambit” as frontrunners for this year’s Emmy Awards, even though both series launched in the fall — which might feel like a lifetime ago as campaigning gets underway.

The HFPA’s love for “The Crown” was expected, as the show had previously won the best drama Globe in 2017. It picked up another one this year thanks to a buzzy Season 4, as the show turned its attention to the more contemporary tale of Prince Charles and Princess Diana, as well as the battle between Queen Elizabeth II and Prime Minister Margaret Thatcher.

The attention on the Charles and Diana story led to a big win by newcomer Emma Corrin, who picked up the best drama actress Globe for playing Princess Diana, and drama actor winner Josh O’Connor (as Prince Charles). O’Connor was a bit of a surprise over “Ozark” star Jason Bateman, while Corrin managed to prevail over co-star and awards favorite Olivia Colman, who won last year as Queen Elizabeth II and until Sunday night had won a Globe every time she was nominated.

Rounding out “The Crown” kudos, Gillian Anderson won, as expected, for playing the prime minister nicknamed the “Iron Lady.”

As for “The Queen’s Gambit,” Taylor-Joy beat out a competitive field that included Nicole Kidman (“The Undoing”), Shira Haas (“Unorthodox”), Cate Blanchett (“Mrs. America”) and Daisy Edgar-Jones (“Normal People”). The show itself also won in a limited series/anthology/TV movie category that featured “The Undoing,” “Small Axe,” “Unorthodox” and “Normal People.”

Perhaps as a nod for how elevated the limited series space has become, it was the final TV award of the night. The limited series race is expected to be the most crowded — and most competitive — in the Emmys this year as well. The HFPA now becomes the first major awards show to recognize “The Queen’s Gambit,” a show that was originally seen as a tough sell because of its setting in the world of competitive chess — but became heralded for the story of a young woman who perseveres while dealing with trauma, addiction and a society trying to define her.

On the comedy side, we had gone a bit on a limb and predicted that the Hollywood Foreign Press Association would be eager to be first major awards show out of the gate to give Apple TV Plus’ “Ted Lasso” an award for best comedy. They didn’t do that — although they did award series star and co-creator Jason Sudeikis the win for comedy actor.

Under the banner of feel-good comedy in these uncertain times, “Schitt’s Creek” ended its six-season run with a Golden Globe for best comedy or musical, on the heels of its Emmy sweep in September. The HFPA had never even nominated “Schitt’s Creek” or any of its stars until this year, and now that the show is over, this was the last chance to rectify that.

“Schitt’s Creek” didn’t dominate on Sunday night the way it did at the Emmys, but it did earn Catherine O’Hara her first-ever Golden Globe, winning for best actress in a TV series (musical or comedy) over Kaley Cuoco (“The Flight Attendant”), Elle Fanning (“The Great”), Jane Levy (“Zoey’s Extraordinary Playlist”) and Lily Collins (“Emily in Paris”). It was the first time any of them (except Collins) had even been nominated for a Globe.

Sudeikis broke through in the comedy or musical actor category, denying “Schitt’s Creek” star Eugene Levy his first Globe (but he can take solace in his Emmy). Apple TV Plus didn’t get its series win, but the Sudeikis victory was still sweet for the new-ish streamer, and sets the stage for an Emmy season where “Schitt’s Creek” is out of the picture. Viewers are still discovering and falling in love with “Ted Lasso,” and production is underway on Season 2 — which means “Ted Lasso” could very well be a contender again next year at the Globes.

Besides the “Schitt’s Creek” wins, the other Emmy victor to translate to a Globe statue this year was Mark Ruffalo, the “I Know This Much is True” star who landed the limited series or TV movie best actor nod. It was HBO’s one win on Sunday night, as Ruffalo beat out Hugh Grant (“The Undoing”) and three Showtime nominees: Ethan Hawke (“The Good Lord Bird”), Jeff Daniels (“The Comey Rule”) and Bryan Cranston (“Your Honor”). Coincidentally, it was the only category this year to not have a streamer in contention.

Meanwhile, the TV supporting role categories continue to confuse, with its hodgepodge of drama, comedy, limited series and TV movies. Comedy usually doesn’t win here, which made it an uphill battle for “Schitt’s Creek” stars Dan Levy and Annie Murphy. Instead, Anderson landed the supporting actress win for “The Crown,” while HFPA voters recognized John Boyega, the critically acclaimed star of the “Red, White and Blue” installment of Steve McQueen’s deeply personal “Small Axe,” for supporting actor. That’s a nice boost for Amazon Prime Video and “Small Axe,” which will compete in the limited series category at the Emmys, where anthologies will now compete starting this year.