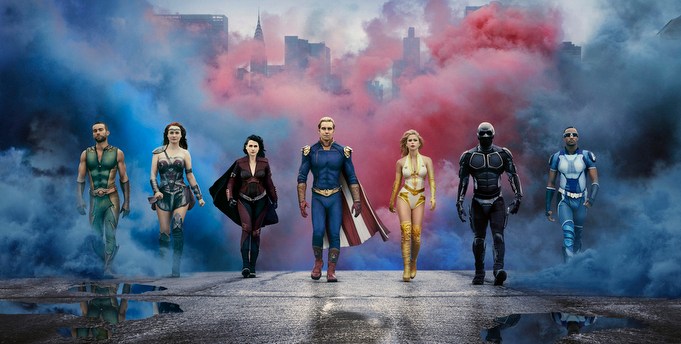 A few years ago, I asked “Supernatural” creator Eric Kripke about the barrier to entry for genre shows in the Emmy race. With a few exceptions, such as “The X-Files” and “Lost,” shows with a sci-fi, fantasy or comic book bent had a hard time being taken seriously by Television Academy voters.

“I always figured it was a neighborhood where I’m not allowed. I always thought it was a gated community [and] I could never get over that gate,” he told me at the time.

“Game of Thrones” busted that gate open. Streaming amplified it, and this year the proof is in the noms: 24 for “The Mandalorian,” 23 for “WandaVision,” 18 for “Lovecraft Country.”

And then there’s Kripke’s latest series, Amazon Prime Video’s “The Boys.” The series follows a group known as “The Boys” who try to expose the truth of how superheroes are abusing their powers. The show’s second season, which ran last fall, earned high marks for storytelling and its use of humor to also make a statement on social media, hero worship and the oppressive forces of the elite. (The fact that Kripke and team do this on Amazon’s dime is even more subversive.)

“The Boys” could have been written off as another superhero show without a chance of Emmy dreams. But credit the team at Amazon for starting to plant the idea that it was worthy of consideration early on.

The show was front and center in Amazon’s campaigns alongside more obvious Emmy fodder, including “The Underground Railroad” and “Small Axe.” There were the normal trade print and digital ads, panels, media availabilities and outdoor signage.

But here’s a textbook case in how campaigning for the right show at the right time can work. Amazon put an extra effort into other elements for its “The Boys” FYC, from a weekly podcast devoted to the show, to elaborate billboards facing each other (at Venice and La Cienega) featuring Homelander (Antony Starr) on one billboard, drilling his laser eyes into Billy Butcher (Karl Urban) on the other.

The campaign led up to the three-day experiential event dubbed “Planet Vought.” In early June, Amazon took over the parking lot at the Hollywood Palladium, fed visitors and sent them through a 40-minute ride that showcased production elements related to “The Boys,” as well as storylines and characters from the show. Around 300 cars of TV Academy voters participated.

For Amazon, it was a nod to the kind of experiential Emmy FYC event that it usually does in person, at the Hollywood Athletic Club, but hasn’t been able to continue because of COVID-19.

All of those efforts surely made enough noise to have an impact on nomination voting, and “The Boys” came away with five nods, including drama series and drama writing.

“We always knew we had something ‘super’ on our hands, given the response of critics, viewers, and of course, President Obama, who included ‘The Boys’ on his list of his favorite shows of the year,” says Amazon Studios director of awards (and full disclosure, my former boss) Debra Birnbaum. “Our goal for the campaign was to capture that spirit — smart, surprising, and more than a little subversive.”

Kripke, for one, is gratified. “Our show’s a superhero show, and it has a certain outrageous tone, but what it’s really about is the intersection of authoritarianism and celebrity, and it’s a really angry satire about late-stage capitalism,” he says. “Maybe it’s some of that layering that people, thank God, are recognizing because we worked really hard.”