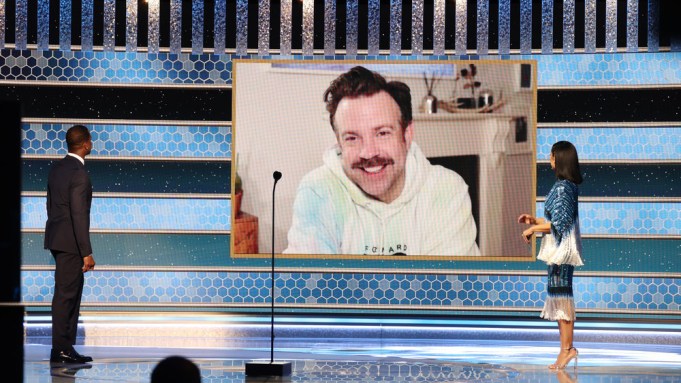 It seems Ted Lasso really is winning over everyone: Jason Sudeikis won the musical or comedy series actor statue at the 78th Annual Golden Globe Awards.

This was Sudeikis’ first-ever nomination from the HFPA and therefore first win. It came for his portrayal of the titular American football coach who crossed the pond to work for a Premier League team in Apple TV Plus’ freshman half-hour. But, Sudeikis first portrayed the character more than half a decade ago, in promotional videos for NBC Sports’ coverage of the real-life Premier League. The expansion of the character in a feel-good sitcom won over audiences and critics alike when it premiered during the tumultuous summer of 2020, and it has picked up its first award too.

“Ted Lasso” is currently in production on its second season in London. It was renewed for a third season back in October before production on Season 2 had begun.

The Ted Lasso character originally appeared in an NBC Sports video in 2013 to help promote the fact that NBC Sports would begin broadcasting English Premier League games. It proved so successful that NBC brought the character back the following year to serve as an analyst.

The show has proven popular with critics, with the first season scoring an 86% approval rating on Rotten Tomatoes. Variety‘s Caroline Framke praised the show upon viewing it, writing, “Above all odds, ‘Ted Lasso’ chipped away at my skepticism until there was none left — just like the character himself does to everyone he meets.”