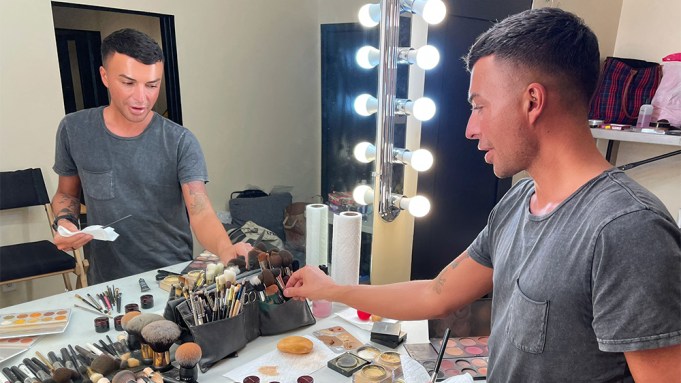 David Petruschin is known to “RuPaul’s Drag Race” fans as Raven. The fan favorite competed in both Season 2 and “All Stars” Season 1 and has been working as RuPaul’s makeup artist for the past five years. Last year pushed Petruschin to work under new conditions when production resumed on “Drag Race” U.K, U.S and a new iteration, “Down Under,” amid the COVID-19 pandemic. He had to pivot to making up the queen of drag with new safety protocols in place, and he earned this third consecutive variety, nonfiction or reality program makeup Emmy nom in the process. (He won last year.)

How did you go from being a contestant on “Drag Race” to RuPaul’s makeup artist?

In 2016, I was asked to come and do Ru’s makeup. Up until then, I had only seen RuPaul in drag when the whole monster was done. I never thought I would see the inner workings. I remember saying no [at first, but] I thought about it and here we are, five years later. We’ve done the U.K, “Saturday Night Live” and all these different things. It’s a crazy thing to wrap your head around when you are responsible for getting the queen of drag into drag.

Let’s talk about the opening episode of Season 13 and putting Ru into drag during the pandemic. What was that challenge?

We still were trying to figure out all of the inner workings of how we can make this happen. But we were tested; you couldn’t be on set unless you were tested. The main stage was made bigger, the judges’ panel was made bigger, and there was social distancing too. I tried not to do too many touchups, so you had to really get Ru ready and get her onto the main stage and try to not step in so often.

What about the finale looks at the Ace Theater?

I wanted each makeup look to complement what [she was] wearing. Ru was doing this performance in a huge tulle coat and going into that neon dress with 300,000 Swarovski crystals. They are two different looks, so I carved out two different looks. For the second look, we went upstairs and blended some things out, removed things and layered on things because I’m not the kind of person to send someone out in the same look.

Talk about how you collaborate with costume designer Zaldy to complete Ru’s look.

We will end up having about 25 to 30 looks for the season, which Zaldy sends, so we get them ahead of the time. I’ll go through and start cataloging ideas. There’s been a lot more leg this season, so that’s been fun to work with. I’ll have makeup references that are used by other drag queens and fashion shows. We don’t say, “Here are the looks for the season,” it happens the morning of. Ru will pick out a dress and I’ll say, “This is how I feel the makeup should look for that.”

How do you insert bold colors into Ru’s palette?

I’m known for perfecting a beige face that looks good with any costume and hairstyle. But your job is to make the goddess of drag look like a goddess, so it’s always about pushing yourself. I love dipping in and saying, “Let’s try this,” and 99% of the time, Ru says, “Sure, let’s do it.”