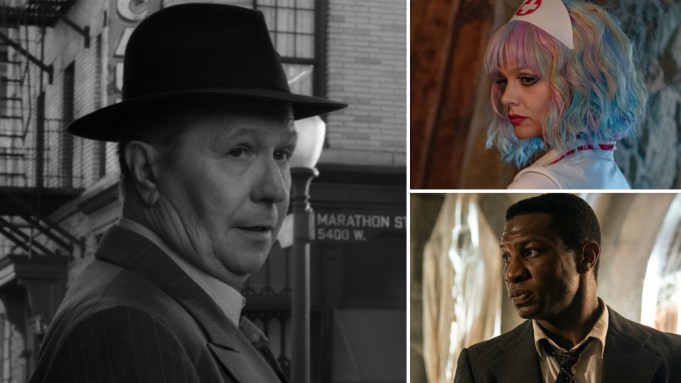 After a week that exposed the Hollywood Foreign Press Assn.’s own lack of diversity within its membership, the 78th annual Golden Globe Awards ceremony took place from both coasts on Feb. 28.

Although hosts Tina Fey and Amy Poehler addressed this controversy in their opening monologue and a trio of members of the HFPA took the stage to acknowledge their need to do better within the first half hour of the show, surprisingly few winners used their acceptance speech time as opportunity to discuss what their win meant in this larger context.

Instead, they chose to celebrate their fellow creatives — both the other nominees in their categories, as well as their cast and crew members with whom they worked and who helped make the win possible.

The three-hour broadcast pretty much went similarly uneventfully, with mostly expected winners (such as “Ted Lasso’s” Jason Sudeikis, Pop TV comedy series “Schitt’s Creek” and Netflix’s “The Crown”) actually being the ones to take the trophies, especially on the television side.

Still, there were a few moments that caused raised eyebrows. To that end, here, Variety breaks down the biggest snubs and other surprises of the 78th annual Golden Globe Awards.

David Fincher’s “Mank” led the film nominations with six nods and felt like it had a few possibilities to win, from director Fincher to supporting actress Amanda Seyfried to the score by Trent Reznor and Atticus Ross, who ended up losing to themselves (and Jon Batiste) for “Soul.” But it ended the night empty-handed. “Promising Young Woman” went into the night with four nominations and a lot of momentum along with it; the timely film was considered by many to be a frontrunner for actress Carey Mulligan and screenwriter Emerald Fennell. Some even predicted Fennell would surprise with a directing win. But in the end, it went home empty-handed, although Fennell’s other project — she played Camilla Parker Bowles on “The Crown” — did quite well.

Day made her film debut in the Lee Daniels-directed flick to great acclaim, but many had predicted Mulligan would take home her first Globe for “Promising Young Woman” or Oscar winners Viola Davis “Ma Rainey’s Black Bottom” or Frances McDormand (“Nomadland”) to pick up their second Globe for their performances. The three, along with fellow nominee Vanessa Kirby (“Pieces of a Woman”) are all SAG nominees while Day is not, and yet it was Day who walked away with the prize.

Many people expected Maria Bakalova to walk off with the prize for her work in “Borat Subsequent Moviefilm,” even though she’s nominated in supporting at SAG and submitted in supporting for Oscars. The biggest threat to Bakalova was perceived to be the legendary Michelle Pfeiffer for her sharp, funny turn in “French Exit.” Instead, Rosamund Pike surprised with a win for her smart, wicked turn as an unapologetic con artist who takes conservatorship of the elderly in J Blakeson’s pitch black comedy which just premiered on Netflix last weekend.

Supporting film categories are often the most difficult to predict; in 2017, the year of “Moonlight,” Mahershala Ali was bested by Aaron Taylor-Johnson for “Nocturnal Animals,” who didn’t land a SAG or Oscar nom — both of which Ali won. Foster, who missed out on a SAG Award nomination for her role as attorney Nancy Hollander, nonetheless triumphed over the likes of Glenn Close (“Hillbilly Elegy”), Olivia Colman (“The Father”) and Helena Zengel (“News of the World”), all of whom are SAG Award nominated, and “Mank” standout Amanda Seyfried. Foster previously won Globes for best actress for “The Accused” and “Silence of the Lambs” and was the recipient of the Cecil B. DeMille Award in 2013.

With former “SNL” stars Fey and Poehler hosting, there were several other cast members who made appearances, from Tracy Morgan to Maya Rudolph and Kenan Thompson (playing a songwriting duo who were either married or related). Kristen Wiig also dropped by as Annie Mumolo, in character from their recent comedy “Barb and Star Go to Vista Del Mar” — a nice treat, considering the film won’t be eligible for Golden Globes.

Although many pundits were actually predicting Corrin would win, hearing her name still came as something of a surprise because she was nominated alongside her “The Crown” co-star Olivia Colman, a woman who (prior to this year’s ceremony) won every Globe for which she had been nominated. Colman was also the incumbent winner in the category, winning for her role of Queen Elizabeth II in the third season of Netflix’s royal family period piece. Corrin was the fresh face not only in the race, but also in the season, stealing scenes, hearts and clearly votes as Princess Diana.

When it came to O’Connor, he was favored by many as well, but he was in a category of vets that was too close to call ahead of the ceremony. The supporting player in Season 3 was bumped up to lead in Season 4 and it paid off wildly, with his first-ever Globes acclaim here. It was also a nice surprise to see both halves of the iconic royal couple be celebrated because the relationship relied on the chemistry between each other.

Misha Green’s wildly inventive adaptation went well beyond the pages of Matt Ruff’s 2016 novel of the same name to simultaneously explore the supernatural horrors of creatures and possession, as well as the literal historical horrors including the 1921 Tulsa massacre and 1950s Jim Crow laws. After its lead performers Jonathan Majors and Jurnee Smollett were shut out in individual acting nominations, many hopes were high that they’d be celebrated together, with a series win. Instead, Netflix’s “The Crown,” which was the projected winner in the drama series category, did win again (its second overall after picking up a statue for its freshman season in 2017).

The Golden Globes were far from the first awards show to go virtual amid the COVID-19 pandemic, but now, almost a year since the virus hit the U.S., with the numbers of infected individual still climbing and with many of the nominees still unvaccinated and in production pods, people have finally started to have fun with teleconferencing into award shows. Regina King’s dog Cornbread got comfortable on his bed behind her during the pre-show interviews, and Jodie Foster held her dog Ziggy in between her and her wife, Alexandra Hedison, while delivering her acceptance speech. Even presenter Sandra Oh included some (fake) four-legged friends when introducing Hulu’s “Palm Springs”: She had someone out of frame dragged toy dinosaurs on a sled through the snow behind her.