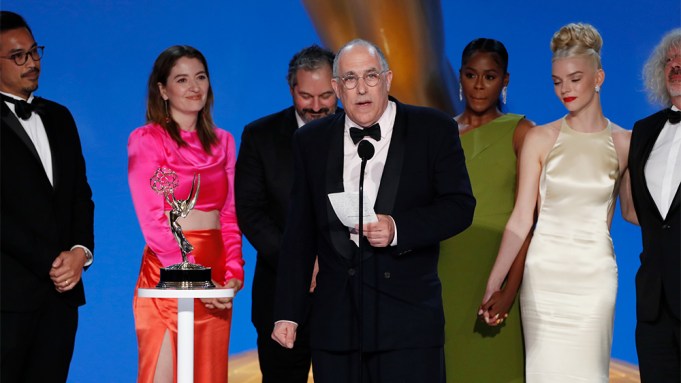 Netflix is celebrating its first Emmys series wins with the trophies for “The Crown” for outstanding drama series and “The Queen’s Gambit” for outstanding limited or anthology series at the 2021 ceremony on Sept. 19.

Netflix was nominated for the most Emmys out of any network this year, with 29 nods. For outstanding series honors, the streamer also received nominations for “Cobra Kai,” “Emily in Paris” and “The Kominsky Method” in the comedy category, and “Bridgerton” in the drama category.

Accepting the award for “The Crown,” creator Peter Morgan kept his speech brief.

“Thank you to the Television Academy,” he said. “Thank you, Netflix. Thank you, Sony. Thanks a lot. Thank you to one or two people not here because we start shooting in a couple of hours. Michael Casey, in particular. Andy Stebbing, Eve Swannell. Thank you, Ben Caron, who is in New York, a wonderful director. Julian Jarrold, Paul Whittington… anybody else? We’re gonna have a party now. I’m lost for words, and I’m very, very grateful. Thank you.”

Accepting the final award of the night, “The Queen’s Gambit” executive producer William Horberg thanked the audience for making the show a hit.

“Thanks to my friend and partner, Alan Scott from Scotland, who carried this queen literally for 30 years. Thanks to our grandmasters, Bruce Pandolfini and Garry Kasparov, for teaching us how truly hip 64 squares can be. Thank you to Netflix. You guys did the rarest thing of all these days: you took a chance on risky material. And you trusted the filmmakers. Thanks to the TV Academy for already recognizing the work of the best department heads and crew that Scott and I have ever worked with, especially our fellow producers, Mick [Aniceto] and Marcus Loges. Anya Taylor-Joy, what can I say? You brought the sexy back to chess, and you inspired a whole generation of girls and young women to realize that patriarchy simply has no defense against our queens. Marielle [Heller], Bill [Camp], Moses [Ingram], Thomas [Brodie-Sangster], Isla [Johnston], Marcin [Dorocinski], you were all a dream team.”

After thanking his family, Horberg ended by paying tribute to co-creator Scott Frank, “for making such a great show that, in this pandemic season, you managed to refurbish the whole world’s tranquility.”

At last weekend’s Creative Arts Emmys, Netflix won best television movie for “Dolly Parton’s Christmas On The Square,” an honor that had previously been awarded during the main show.