Continue to Variety SKIP AD
You will be redirected back to your article in seconds
Jun 16, 2021 3:15pm PT

Mariska Hargitay and Christopher Meloni on Their ‘Law & Order: SVU’ Reunion, and That Deep Benson/Stabler Chemistry 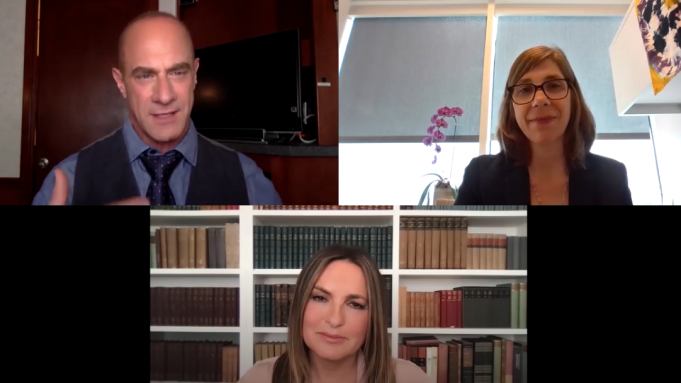 For Mariska Hargitay, the departure of Christopher Meloni and his “Law & Order: SVU” character, Elliot Stabler in 2011 after 12 seasons, was “so painful for me and so hard because the way he left, there was no closure. There was just a big hole.”

But Meloni is back, in the spinoff series “Law & Order: Organized Crime,” and the two actors met up with Variety’s Cynthia Littleton in the Variety/NBCUniversal Virtual FYC House to discuss their reunion, both on camera and off.

“Now coming back again, incredibly earned,” Hargitay said. “Within the writing, there’s so much to play and yet it’s sort of effortless because it’s true. And we have been apart, so it’s been a joy. One of the, I think, biggest compliments that I received and I receive still is, ‘I like it best when there’s no words, when you guys are just looking at each other, because I feel it all.’ I think we’re pretty locked in and dialed into each other. And so that’s been a joy and a pleasure to find.”

Meloni said his decision to return to the “Law & Order” universe came after “things in my personal life fell into place, which made it correct and right for me to say yes to the offer. The buildup of anticipation and expectation leading up to it was the most unnerving part. I was a bit surprised at how much clarity I had as I was thinking about the character — where he’d been, what he’d done. And I worked on it with the showrunners and I was very pleased with what we had hammered out, his backstory. I thought it very imperative that there’d be a certain amount of growth.”

Hargitay said she and the rest of the “L&O” team had spent some time figuring out how to bring Meloni — and Stabler — back into the fold. “There were so many pieces,” she said. “His new show and our show and how we were going to do that. And it took a lot and I have to again, pay homage to Ilene Chaiken, Chris’ showrunner, who’s just amazing, and our team, Warren Leight and Julie Martin. And this was all during COVID. And we had to change the story so many times because there were setbacks and timing issues… And there was so much work. It was insane, all the iterations of the crossover and what that was and how it was. And so much care was taken. And it was so important to us and we wanted it to be honoring and perfect. And that’s a big responsibility.”

Hargitay said she and Meloni quickly found their groove again, thanks to “a chemistry and an ease and a familiarity and a curiosity” that happened the moment they met. “

I think we connected on so many different levels, which is really a gift with any human being,” she says. “But we went through so much in the first 12 years and dug so deep and had a very full relationship and a very honest one and brave one. And we also experienced so much together for the first time that quite frankly, nobody including our spouses, really understood because we lived something and we created this baby together being ‘Law and Order Special Victims Unit.’”

Watch the full conversation inside Variety and NBCUniversal’s Virtual FYC House, which is currently live and ready to visit. Content in the house also includes a rare public conversation between comedy titans Ted Danson (“Mr. Mayor”) and his producer Tina Fey, as well as panel conversations with producers and artisans from some of the top shows airing on TV.

Additionally, NBC has re-created a virtual version of their iconic tram tour where you can find exclusive content from “This is Us,” “Zoey’s Extraordinary Playlist,” “The Voice,” and “Top Chef,” to name a few. Throughout the month new, never before seen content is being added to this site.