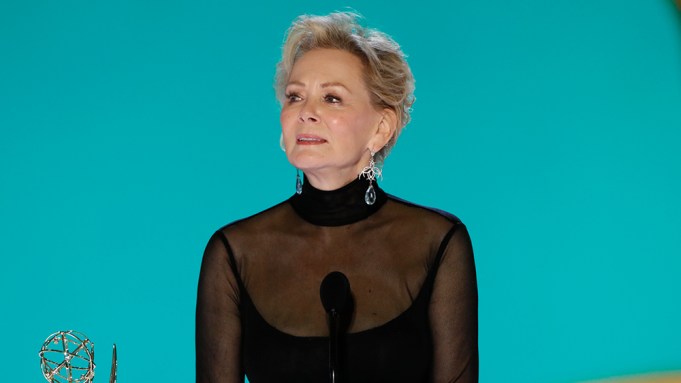 The Jeanaissance is alive and well. She may not like the term to describe her latest career peak, but there’s no denying that legendary actress Jean Smart is on a roll, having won her fourth Emmy Award on Sunday night.

Smart was named outstanding lead actress in a comedy series for her critically acclaimed role as stand-up Deborah Vance in HBO Max’s “Hacks.” This is her first lead acting win following victories in the supporting comedy actress (for “Samantha Who?”) and guest comedy actress (for “Frasier”) categories. She was also nominated last year for supporting actress in a limited series or movie for another HBO show, “Watchmen.”

Smart received a standing ovation as she accepted the award, dedicating it to her late husband, Richard Gilliland.

“Before I say anything else, I have to acknowledge my late husband who passed away six months yesterday,” Smart said. “I would not be here without him, and without his kind of putting his career on the back burner so I could take advantage of all the wonderful opportunities that I have had.”

She also thanked her co-star Hannah Einbinder, calling her a “mind bender.”

“Scott Henderson at WME has been my agent forever, the best agent in the world. Jason Weinberg, everybody, Daniel, Thomas my publicist, and an unbelievable cast lead by Hannah ‘mind bender’ Einbinder,” Smart said. “That is her actual name. No, I’m kidding, but I could not have asked for a better person to bounce everything off of every day. She is a natural, she is a precious human being. She is incredible, and every day we go to work is a joy and the words we get to say are a joy.”

The actress was a double nominee this year, also up for supporting actress in a limited series or movie for her role as Helen Fahey, Kate Winslet’s character’s stubborn mother in HBO’s “Mare of Easttown.”

“I certainly realize that’s not the norm for most actresses of my vintage,” she told Variety in this week’s cover story about her recent string of hits.

She added that “it was pure luck” that “Hacks” and “Mare” debuted a month apart. “The fact that I had two roles that were such good ones, and kind of worlds apart, coming out at the same time — actors never get that opportunity,” she said.

“Hacks,” created by Paul W. Downs and Lucia Aniello, was also up for outstanding comedy series and earned Hannah Einbinder a supporting nom.