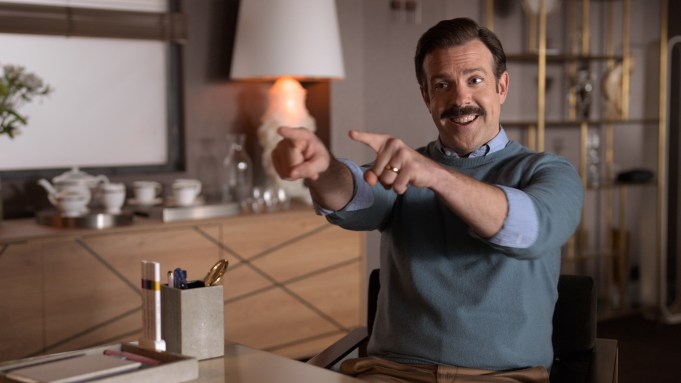 Variety's Awards Circuit is home to the official predictions for upcoming awards. To see all the latest predictions, of all the categories, in one place, visit THE COLLECTIVE

AWARDS COMMENTARY:
Believe. It’s Ted Lasso’s mantra in “Ted Lasso,” and it could be the show’s motto as well. Apple TV Plus got into the awards game last year with “The Morning Show,” and now “Ted Lasso” could score it even more high-profile wins. As the Hollywood Foreign Press Assn. prides itself on being first to award buzzy new shows (thanks in part to its place on the calendar), giving “Ted Lasso” the top prize before the Emmys have a chance seems like an obvious play for the org. Of course, standing in its way is “Schitt’s Creek,” which already swept the Emmy Awards in September and has the most nominations of any comedy series this year, with five. But while Globes voters may want to award icons like Eugene Levy and Catherine O’Hara, they might want to mix things up with the top comedy prize. Meanwhile, Hulu is in the hunt with “The Great,” while HBO Max could also be in the mix with “The Flight Attendant.”

AND THE PREDICTED WINNER IS:

The Golden Globes Awards, hosted by the Hollywood Foreign Press Association, is held annually with 93 members since 1944. The group recognizes excellence in film and television, across drama and comedy or musical categories. “Mad Men” and “The X-Files” hold the record for most wins as best drama, at three each, while “All in the Family” has won the most awards for best comedy/musical, with four wins. Carol Burnett has the record for most TV nominations, at 13 (she won five), while Alan Alda has the most TV wins, with 6 (out of 12 nominations).