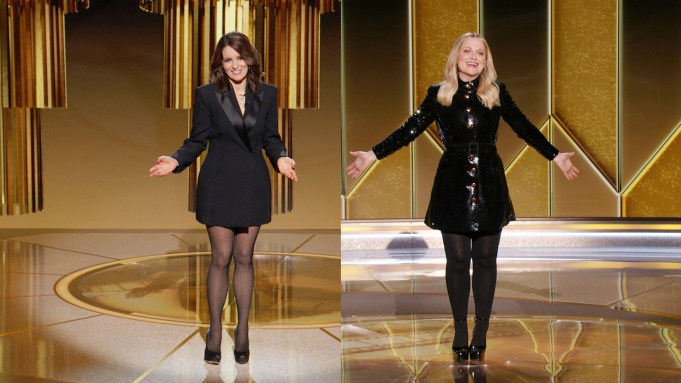 It was the most unusual Golden Globes Awards since 2008, when the writers’ strike forced producers to scrap it in favor of a press conference. But this year, the show strived to be, in the words of executive producer Barry Adelman, as “Golden Globes-y” as possible.

That meant embracing unpredictable moments, such as when Catherine O’Hara’s husband added sound effects from his phone to the “Schitt’s Creek” star’s acceptance speech, or when “Judas and the Black Messiah” star Daniel Kaluuya accidentally had his laptop on mute (something that was quickly rectified).

“There were a number of surprises all night long where suddenly people popped up in situations that you had no idea that it was happening,” Adelman said. “I thought it made the show extremely interesting. You suddenly saw children walk into the frame, you saw dogs. Jodie Foster and her wife and their dog was a total surprise and a wonderful picture.”

Critics were not as kind, giving the telecast poor reviews, and ratings sunk to those 2008 levels, as perhaps audiences have grown tired of watching celebrities accepting awards in Zoom boxes. (The Globes had held steady in the ratings until this year, but all bets are off in these COVID times).

Still, this year’s ceremony had its landmark and memorable moments, such as the emotional speech by Chadwick Boseman’s wife, Simone Ledward Boseman, who accepted the late star’s best drama actor win for “Ma Rainey’s Black Bottom.”

“There were about five or six moments that were extremely memorable and going to make any highlight reel of Golden Globe shows,” Adelman said. “Even in a virtual world we were able to get humanity, and we were able to get emotion. Which is always to me, along with humor and unexpected moments, the highlights of any award show.”

• Fiber optics are everything. Anyone who’s been on a Zoom call knows it’s impossible not to step on each other while speaking, but Globes hosts Amy Poehler and Tina Fey managed to mostly avoid it, even though they were on opposite coasts. (The only noticeable hiccup was when both introduced Norman Lear’s Carol Burnett Award acceptance.) Part of that was thanks to lightning-fast fiber between both coasts that kept the time lag to a third of a second.

“With our hosts on the different coasts we wanted to keep it as seamless as possible,” Gierahn said. “And really what that meant was so much prep with an army of technical producers that we had working on both coasts. We extended our schedule to make sure that we had proper time to go through everything, make sure that it was working. And we had it look similar in both locations so that at the top of the show it could look seamless.”

Added Adelman: “It’s easy with them, because they have such an amazing chemistry with each other, that 3000 miles doesn’t mean anything. Their timing remains the same. If you’re going to do it with any two people, they’re the two I would pick.”

• The Globes normally cram hundreds of attendees into every nook of the Beverly Hilton ballroom. This year, the audience was just 42 in Beverly Hills and 32 in New York’s Rainbow Room. The mix of first responders and essential workers were screened beforehand and made up of a wide variety of people including teachers, flight attendants and restaurant and grocery store workers.

Gierahn said the audience reaction wasn’t sweetened because “they were so excited to be there and so enthusiastic, and they were loud.” They weren’t fed, however. “We’re just not able to right now with LA county rules,” she added.

• Nominees were all given their own isolated feed at home. Some virtual attendees required additional equipment, while others used their own computers. Producers had the ability to mute and unmute the people at home, but there are occasions, such as Kaluuya’s muted laptop, that were out of their control.

• Most of the thank yous were live, but a few were given the option to pre-record — including Lear’s speech. “Norman Lear, obviously at 98 years old, as he said last night soon to be 99, we wanted to make it as comfortable for him as possible,” Adelman said. “He’s still sharp and vital as he showed that last night. But we thought it was a more comfortable arrangement for him to pre-tape it, and even though it was pre-taped, he certainly made the most of that moment.”

• Before most commercial breaks, nominees in various categories were shown conversing with each other. That was the idea of director Louis J. Horvitz, who pitched the concept of showing category contenders together in a virtual holding room, and arranging it so they could talk to each other.

“What we were trying to do there was, in some way, establish the same fun and camaraderie that you get at the Globes when it’s happening live in the ballroom,” Adelson said. “Some of people’s favorite parts of the Globes are watching people table hopping and talking to each other. These are all fans of each other. They all know each other’s work, and this gave them the chance to do it as if they would have seen each other at the show.”

Gierahn said the production team was communicating directly with each nominee, and making it clear when they were on and when they weren’t. “A lot of times of course they were nervous so they wanted to ask and double check, ‘am I on or am I off?’ But we definitely communicated with them throughout the process,” she said.

• Some of the winners’ choices during their acceptance speeches surprised the producers. When “Soul” producer Dana Murray and co-director Pete Docter accepted the award, they also held up an iPad featuring a pre-recorded thanks from co-director Kemp Powers. Luckily, the audio worked, but “I had no idea that was going to happen,” Adelman said.

Ditto, as mentioned above, the gag from O’Hara as she accepted her best TV comedy actress award for “Schitt’s Creek.” Said Adelman: “Her husband, who had the phone, was playing applause for her or music that was not translating audio wise to us, but they were having something going on there that we had no idea about. It was totally impromptu and we didn’t know where that sound was coming from. We knew it wasn’t in our system and then we finally saw what he was doing there. This is the fun of live television.”

• In-person presenters were given the option of staying in their cars, and then leaping out and taking a specific, socially distanced path to the Globes stage. In some cases, if someone was needed more than once for the show, they were offered a holding area where they could wait. “We really try to keep our numbers as small as possible and have essential crew on site,” Gierahn said. “It really just came down to the individual situation and what people were comfortable with. But for the most part, in and out as quickly as possible.”

• TikTok star La’Ron Hines was recruited by Poehler and Fey to do a segment with preschool kids giving their take on movie titles. “La’Ron has a big following on TikTok and online, and I think Tina and Amy came across him,” Adelman said. “They love them, and they said we got to do something with this young man. They talked to him and they came up with this idea, and it sounded great to us. Linda and her team made sure that it was COVID safe.”

• Poehler and Fey made the decision to address the HFPA controversy over the lack of Black members on their own. “I will tell you we have a hands-off policy on the monologues,” Adelman said. “Once we hire our hosts, they can say what they want to say. As can our presenters, as can anybody who’s going to make an acceptance speech. That’s part of our philosophy on this show, and that was all Tina and Amy, they said what they wanted to say and we let them say it.”

• The HFPA also briefly gave their promise to improve membership inclusion during the segment that they have annually on the telecast. “The HFPA always has a moment in the show where they can address any issues that they choose to address,” Adelman said. “There’s been a number of them. It goes back almost decades now. They’ve addressed other issues that were timely in those addresses in the past and this was a timely issue and it’s their spot.”

• Adelman isn’t opposed to trying the bicoastal setup again. “I’m open to anything in that area,” he said. “I don’t want to give Linda sleepless nights, but I would consider doing it again under the right circumstances. Obviously, we did it because of the circumstances of this unusual year… if that makes sense again, I’m open to anything.”