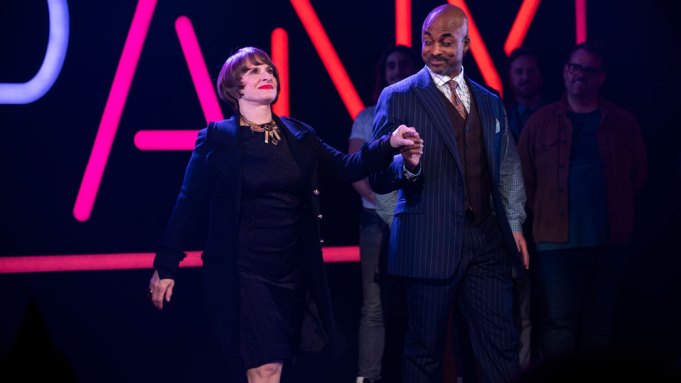 Patti LuPone took her seat on the stage of the Bernard B. Jacobs Theatre and readied herself, drenched in jewels and a flowing fur coat, for “The Ladies Who Lunch,” the famous Act II showstopper in “Company.” It was opening night and Stephen Sondheim wasn’t in the audience.

Over the past two weeks, what was a celebrated reimagining of Sondheim’s great musical, written in collaboration with the English director Marianne Elliott and starring Katrina Lenk as Bobbie, had become something entirely different — a living, breathing memorial to its creator, saddled with the responsibility of being the first Sondheim musical, blessed by the composer and lyricist, to open on Broadway after his death.

As LuPone took her seat on the platform, ready to push forward onto the stage and conjure the messy alchemy of humor, ambivalence and tragedy, which Elaine Stritch first lodged into the number, the weight of that moment and responsibility was unlike anything LuPone had experienced in her career.

“I couldn’t put my finger on what was going on in my head,” she told Variety after the show, still grappling with the weight of the occasion. “I’ve never gone through this before. I’ve never been in a show that had this much joy, this much grief, this much pressure.”

There are some rare occasions in musical theater in which the complicated alchemy of song and emotion cascading from the stage, a theatrical instant, can become larger than itself, than the show or moment to which it belongs. On Thursday evening, as LuPone, reaching the climax of “Ladies Who Lunch,” commanded the audience to “rise” — in that moment, for Sondheim, for the legacy he left behind, and for an industry which remained shuttered for more than a year — she stayed seated, humbled as all of Sondheim’s characters were, by the immense gravity of living life.

“Michael Bennett, George Furth and Steve Sondheim are all dead, and that’s what I was thinking about,” she said after the show, just having left her dressing room to head down the street to the production’s afterparty at the Civilian Hotel. “I wondered — I desperately wanted to know — that if there was a heaven, were they watching? Were they in the theater with us just then?”

“And,” the diva, a Sondheim muse and close friend, asked, “Did they approve?”

For many in the cast on Thursday, who had the privilege of working with Sondheim as they prepared the show, both in its preview run before the pandemic and after, the answer to LuPone’s question was assured.

“Steve loved the first night of previews more than opening night,” Jennifer Simard, who plays Sarah, told Variety after the show. “He was there on our first night, and we got our time with him then,” she said. “I’m a firm believer that everything happens for a reason. So, I guess this was the plan.”

By now, it’s well documented that Elliott’s “Company” is a hefty reinvention of Sondheim’s work, not simply gender-swapping the roles of Bobby and Amy, but pairing Elliott’s evocative contemporary style with an archival mine of George Furth’s early notes to reconfigure much of the musical into a recognizable narrative of modern love and angst.

“It was as if we were working on a new musical together,” Elliott, acutely aware that Sondheim defined himself by his collaborators, told Variety. “We poured blood into this and so did he.”

For Matt Doyle, whose Jamie — instead of Amy — sings “I’m Not Getting Married Today,” Elliott’s aesthetic and narrative changes meant more to the composer than others realized.

“We forget what a major deal it is to have Jamie and Paul on that stage in a Sondheim musical. And he noted that to me,” Doyle mentioned about the composer, who died in his home nearby his husband and whose sexuality was curiously distanced throughout his career. “He couldn’t believe that it wasn’t a big deal for people, because it was revolutionary for him.”

On her way to the party, she contemplated “Being Alive,” among Sondheim’s greatest lyrical compositions and a number which at “Company’s” conclusion offers Bobbie no happy ending, but, within her character’s limits, a realistic one.

“Every night the song can have a different color, because of whatever was experienced that day,” she said. “Everybody, every audience, wants to strive for meaning and for permanence, on opening night or any night.”

“Tonight,” she concluded, “‘Being Alive’ was about doing my best to honor him, to do what all of his musicals commanded of us — to be as human as we can in every moment.”