China’s top streaming platforms censored around six minutes of material from HBO Max’s “Friends: The Reunion” special on the day of its debut Thursday, deleting footage of artists like BTS previously deemed to have “insulted” China, gay fans, references to pee and a shot of Matt LeBlanc in his underwear, among other moments.

“Friends” has amassed a huge, devoted following in China over the years, and thousands of fans had expressed their excitement for the special across all local social media platforms ahead of its release.

But many said they were “bewildered” to find that all three of the country’s major streaming platforms with rights to officially broadcast the show — iQiyi, Alibaba’s Youku and Tencent Video — had entirely cut appearances by musicians BTS, Lady Gaga and Justin Bieber, as well as other scenes.

“Are we reverting to the isolationist Qing dynasty, closed off to the rest of the world?” a commenter on the Weibo social media platform railed.

Many, however, expressed support for the censorship, stating that those who have slandered China should indeed be banned.

BTS, Gaga and Bieber are all artists who have run afoul of Beijing in the past.

Last October, Chinese nationalists slammed BTS for insulting China by not mentioning the sacrifices of Chinese soldiers in the Korean War in an acceptance speech for a prize celebrating the group’s contributions to U.S.-Korea relations, which had no direct relation to China.

Gaga has been a persona non grata in China since she met in 2016 with the Dalai Lama, with whom she discussed compassion. Beijing accuses the Nobel Peace Prize laureate of being a dangerous separatist.

Bieber first came under fire in China in 2014 for photographing himself visiting Tokyo’s controversial Yasukuni war shrine, a site that honors Japanese World War II war criminals alongside other casualties of war. In 2017, the Beijing Municipal Bureau of Culture formally banned him from performing in the country, citing “a series of bad behaviors” both on- and off-stage.

All three Chinese platforms cut the musicians out of the “Friends” special entirely.

In BTS’ offending 13-second clip, the K-pop superstars express their love for the series, with member RM saying the show “really taught [him] things about life and true friendship.”

In the uncut HBO Max version of the special, Gaga appears for nearly three minutes to sing a rendition of “Smelly Cat” with Lisa Kudrow’s Phoebe, backed by a gospel choir. She thanks Kudrow for being “the different one, the one who was really herself” on the show.

The Chinese version allows Kudrow to sing a verse of the song for about 45 seconds on her own before jumping to the next post-Gaga segment.

Later, Bieber’s strut down a catwalk to show off a beloved potato costume from the show, “Spudnik,” disappears without a trace.

Even more troubling, perhaps, is China’s erasure of LGBTQ references. All three platforms deleted the testimony of German “Friends” fan Ricardo, who described how the show gave him a sense of belonging.

“I was a gay man who wanted to have hair like Jennifer Aniston, so you can imagine how lonely I sometimes felt,” he says.

Additionally, Youku deleted a subsequent scene in which a woman pulls her girlfriend on camera. “Like every Chandler, I found my Monica,” she says.

Youku also cut out shots of a separate scene in which LeBlanc’s Joey opens his bathrobe to reveal himself in his skivvies with a picture of Ross stuck to the front of his underwear.

More confusingly, iQiyi and Tencent both censored a seemingly innocuous classic scene in which Monica recounts how Chandler and Joey helped her overcome a severe jellyfish sting by peeing on her, as the rest of the gang squeals in horror. 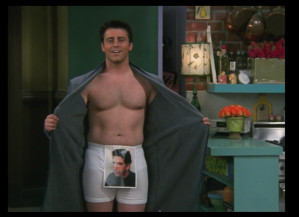 Though Youku kept the pee references, it cut banter just after that scene about what the cast was wearing the first time they met.

Chinese platforms are responsible for executing their own censorship in-house, and either hire battalions of employees for the task or outsource the resource-intensive business to a third-party firm. Many prefer to overshoot than face potential repercussions for letting content deemed politically sensitive slip through the cracks.

While all of China’s official “Friends” streamers censored the special for its debut, some were more heavy-handed than others. The original runtime for the HBO Max version is 1:43:50, but iQiyi’s version initially clocked in at 1:37:54, Tencent Video’s at 1:39:23 and Youku’s at 1:40:16. By around 11:30 p.m. local time, about eight hours after its release, the latter two channels made further cuts to match iQiyi’s runtime.

The runtime discrepancies and later changes highlight the caution with which Chinese platforms are currently approaching online entertainment, celebrity “morality” and fan culture.

In recent months, social and governmental pressure to clean up and “purify” what is described as a wayward, immoral industry has been mounting, spurred on by the fact that this year marks the sensitive 100th anniversary of the founding of the ruling Communist Party and censors are on overdrive.

Earlier this month, for instance, a handful of BTS Weibo fan accounts were issued a month-long ban from posting for inciting what the platform described as undesirable fan fervor.

The Douban platform has shut off the user rating function for the “Friends” episode, potentially to head off any backlash over the censorship. It seems, however, that the deleted clips are not yet entirely banned from the Chinese web, since some continue to circulate on social media.

Fed up with censored versions, many viewers have downloaded pirated copies of the HBO Max version to bypass local streamers entirely. Others have turned to unauthorized, uncensored versions posted elsewhere, like the Bilibili platform.

In bullet comments over the brief, uncut BTS segment on Bilibili, one user addressed the censorship with frustration. “What does a Korean group appearing on here have anything to do with us? It’s not like we can actually stop them.”

Others delighted at Kudrow’s bristling response to Gaga’s rendition of her song. “That’s so Phoebe!!” one cheered.

Overall, the response in China to the episode has been overwhelmingly positive, with countless fans describing how the special brought tears to their eyes.

“This whole show brings up so many memories — I’ve watched all ten seasons more than a dozen times. I don’t have many friends, but they are really like friends of mine,” one wrote.

Another eulogized: “These six people are truly global stars. No matter how many years have passed, they represent an important part of American culture, and popularized that American culture across the whole world.”