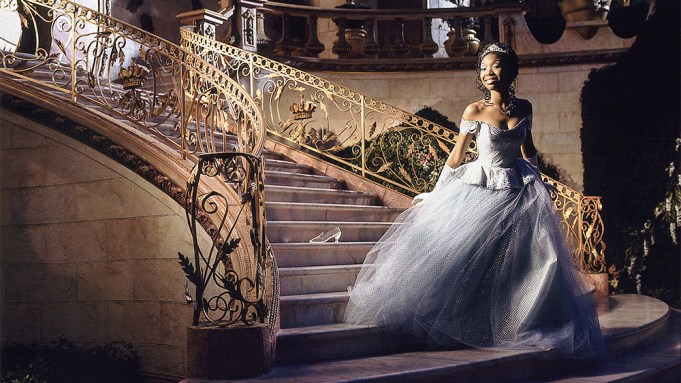 The movie’s streaming debut has been long awaited by fans who urged Disney Plus to rerelease the musical, which was originally televised as a “Wonderful World of Disney” special on ABC.

“I feel like it’s divine timing,” Brandy tells Variety, saying she learned that the film would come to streaming just over a week ago. “This is the month of love; this is a month of Black history. This is just the perfect time for this product to be shared with everyone.”

Brandy made the public announcement on ABC’s “The View,” where she reunited with “Cinderella” cast mate Whoopi Goldberg, who plays Queen Constantina in the film. Houston famously played the Fairy Godmother.

“I don’t think it’ll hit all the way home until it’s actually out there, and I can feel the energy of everybody feeling it and connecting to it,” Brandy says. “I’m really excited because I feel like this new generation hasn’t seen anything quite like this version of ‘Cinderella.’”

So how did the film — which features a Black princess — finally make it to streaming? Producer Debra Martin Chase says that after seeing the social media pleas, she started working the phones to figure out how to get the deal done.

Chase called Disney Plus president Vanessa Morrison, an old friend, and found out that Disney had already begun the process of working out the rights with the Rodgers & Hammerstein estate. The teams stayed in touch for nearly a year, with periodic updates coming from Disney Plus executive Sarah Shepard.

“Once they got into it, I think they were motivated,” Chase says. “They took a look and realized that there was such a huge appetite for it.”

In January, Chase got the news she’d been waiting for — bringing the classic film to audiences was officially a go: “[Shepard] emailed me and said, ‘We did it!’”

With the addition of “Rodgers & Hammerstein’s Cinderella,” the streamer now features six versions of the fairy-tale princess’ story — including the 1950 animated “Cinderella” and the 1998 Drew Barrymore-starrer “Ever After.”

“‘Cinderella’ is an iconic story,” Chase says. “And I think everybody associates with probably one version in particular, for whatever reason. The fact that a young Black woman, Brandy, was Cinderella for the first time, and the rest of the cast was this multicultural mosaic, that certainly hadn’t been done before.”

As Chase notes, the star-studded and multiracial cast (including Goldberg, Bernadette Peters, Victor Garber and Jason Alexander) was just as important as its immensely catchy tunes.

“It was incredibly hard to put the cast together because it had never been done before,” Smith recalls. “You had people who were skeptical that the audience was biased, and we had other people who thought it was enlightened and visionary.”

With Halle Bailey starring as Ariel in Disney’s upcoming live-action “The Little Mermaid” and Yara Shahidi as Tinkerbell in “Peter Pan,” the movie’s legacy lives on.

“I feel like it opened doors,” Brandy says. “And it’s because of Whitney Houston, producers Debra Martin Chase, Craig Zadan and Neil Meron — it’s because of them that I was able to be that person to help open the doors for so many other young artists that want to do things that they probably think are impossible.”