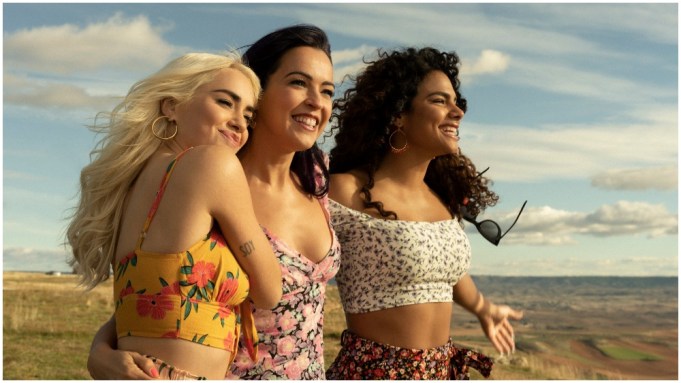 Netflix Spain has dropped a trailer for the highly anticipated second season of its high-octane Spanish thriller series “Sky Rojo,” coming to the platform worldwide on July 23.

Shifting from the Spanish noir aesthetics of “Money Heist,” “Sky Rojo” opts for a brightly colored, neon palette to mix several genres into something its creators Álex Pina and Esther Martínez have dubbed “Latin Pulp.” In another shift, the duo has also cut each of the season’s eight episodes to a punchy 25-minute runtime.

In “Sky Rojo” season one, three exotic dancers are forced into prostitution after becoming victims of a human trafficking scheme. After a confrontation with club-owner-turned-pimp Romeo turned violent, the three broke from their chains of bondage and fled across the Spanish Canary Island of Tenerife. Spanish actor Verónica Sanchez (“Gordos”), Argentine singer-actor Lali Espósito (“That’s Not Cheating”) and Cuban up-and-comer Yany Prado (“Tres Milagros”) play the three lead roles in the series.

After a series of traumas and near-death showdowns in season one, Coral, Wendy and Gina are back with a plan, an arsenal and a grudge that needs settling. In the trailer, we see the three once again commit to their Musketeer-like bond before arming up and hunting down their former oppressors. Meanwhile, the threads holding Romeo and his crew together begin to fray as disagreements in how to handle their problem pull the once tight-knit family apart.