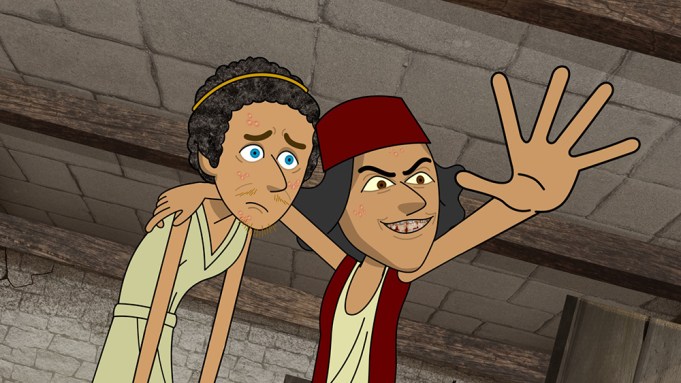 “I’m afraid nobody will like me at my new school,” says the protagonist of “Mean Boys” at the beginning of its trailer.

Growing up is never easy. But it’s especially challenging if you’re old man’s God, you’re a teen Jesus, and you’ve got to control your good works at your new school or you could be identified as the Messiah and be carted off for a premature crucifixion.

So, in a attempt to fit in – and a homage to cult U.S. movie “Mean Girls,” – best pal Lazarus comes up with the idea of Jesus trying to go against his best nature and become a mean boy at school.

That’s the basic set-up of “Mean Boys,” the 2021 Christmas Special from Brazil’s Porta dos Fundos whose trailer Paramount Plus has shared in exclusivity with Variety.

The Special is unlikely to go unnoticed by more conservative groups in Brazil. This time round, however, there are some crucial differences. It’s animation, ViacomCBS-owned Porta dos Fundos’ first venture into the medium. It will bow Dec. 15 exclusively on Paramount Plus, when 2020’s Special played YouTube. Backdoor, Mexico’s equivalent to Porta dos Fundos, has created a voiceover for a Spanish-language version (see poster).

“The Bible doesn’t talk at all about Jesus when he was young. But he was a teenager and would have had teenage questions and needs so we said: ‘Let’s talk about them,’” said Porta dos Fundos co-founder Fabio Porchat, creator of the Special, adding that he admired deeply “The Gospel According to Jesus Christ,” by Portugal’s Nobel Prize winning writer José Saramago, which offered a humanized version of the figure. “Not that I’m trying to compare myself with Saramago,” Porchat added.

“The First Temptation of Christ,” Porta dos Fundos 2019 Christmas Special, featured a possibly gay Christ, sparking a petition to ban the special signed by more than two million people. A temporary ban was accompanied by a Molotov cocktail attack on Porta dos Fundos’ headquarters. (The fire was put out by security guards.)

“We make fun of Christians, Evangelicals and Muslims, everybody. We always try to push the envelope. That’s one of our missions,” said Porchat.