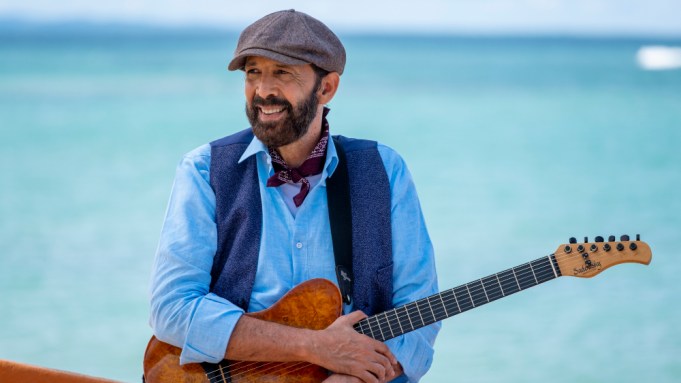 Juan Luis Guerra, one of the Dominican Republic’s greatest artists, will debut his new HBO Concert special June 3 on HBO Latino and on streamer HBO Max, just in time for the latter’s June launch in Latin America.

“Juan Luis Guerra: Entre Mar y Palmeras” (Between the Sea and the Palm Trees) is an open-air, audience-free concert which Guerra staged with his band, Los 4.40, on one of his country’s stunning beaches, the Esmeralda.  Its trailer debuts exclusively in Variety.

The multi-Grammy winning musician, composer, singer and producer will perform a heady mix of new and classic hits, including “La Bilirrubina,” “Burbujas de Amor,” and a new arrangement for his career-launching anthem, “Ojalá que Llueva Café.”

Guerra studied at the prestigious Berklee College of Music where his training in jazz composition and arrangement informs his best-selling songs, a tropical mélange of Merengue, Bolero, Bachata, Afro-Pop and in later years, Gospel, as he found new inspiration in his Christian faith.

Guerra formed his band, Juan Luis Guerra and 4.40, with his first album, “Soplando,” soon after returning from Berklee. It was in 1989 when he shot to global fame with his album and lead song, “Ojalá Que Llueva Café.”

In 2007, he released “La Llave de mi Corazón” which was awarded a Grammy®, several Latin Grammys®, and Billboard Awards among other accolades. Guerra has toured and sold out at venues worldwide, and has collaborated with such artists as Tony Bennett, Alejandro Sanz, Luis Fonsi, Enrique Iglesias, Juanes, Maná, Diego Torres, Nelly Furtado among many others.

Produced by Miami-based Loud and Live Studios, the concert was filmed during the COVID-19 pandemic with over 75 crew members, 20 musicians, and a dozen assistant crew members who followed stringent safety and social distancing protocols. The concert special is a production of Guerra Films and directed by Guerra’s son, Jean Gabriel.

It seems that the pandemic has not slowed you down but instead has given you new impetus to create new songs and to hold this new concert in your home country.  Tells us how you found inspiration to compose new songs, rearrange classics like “Ojala Que Llueva Cafe” and stage this unique concert?

Inspiration always comes, it is a gift from the Lord Jesus, both for new songs and for arrangements of classics. In the case of “Ojalà Que Llueva Cafe,” everything came together in the studio, on piano, guitar and voice. We wanted a somewhat impressionist intro, in the style of Ravel or Debussy. Then we added strings and French horns and we really liked the end result!

How was the experience in staging the concert with all the health and safety protocols you had to follow?

The experience of playing on Esmeralda Beach without an audience was special and unique. We had only the camera crew, technicians and my son Jean Gabriel as director, aside from the band. The sea was our stage and the applause for every song. As I say at the beginning of the concert: without an audience, everything is very different, but yes, we play as if it were present!

How has your faith influenced your music?

My faith greatly influences my music. I believe my songs are loaded with truths that come to me when composing and that come from the word of God. This not only happens in purely Christian meringues like “Las Avispas” or “Para ti,” but also in my romantic compositions. Everything flows through faith.

What does your fame and success mean to you? How have you channeled them to help other less fortunate people in your country and in the world?

Fame and success are the result of having God in your life. He is responsible for all our victories. The word of God commands us to share what we have with others and that inspires us to help others. In our country we work through our foundation. We have a nursing home where we provide food, medicine, recreation and spiritual help. In the same way, we work in the feeding of children at the Robert Reid hospital and in various needs of requests that arise daily. In the case of aid to other countries, we do it when our fellow artists require our participation in different solidarity events.

You have collaborated with many great artists through the years. Who else would you like to collaborate with?

I would very much like to collaborate with Pat Metheny, he’s been my favorite guitarist ever since I attended Berklee in 1979, and with Jacob Collier, a marvelously talented young English musician. It would be a privilege!

What’s next after this? Are you hoping to go on a tour once the world goes back to normal?

We are planning on taking “Entre Mar y las Palmeras” on tour, staging it in a variety of venues, but if we can have it on beaches in different countries, it would be a great option, if viable.

I am also working on the musical score of an animated feature film of which I am also a producer. It’s called “El Capitan Avispa,” a hero who fights for the love of his friends and created from the song “Las Avispas,” released in 2004.