Harley Quinn Makeup Tutorial: How to Recreate Her ‘Suicide Squad’ Look For Halloween 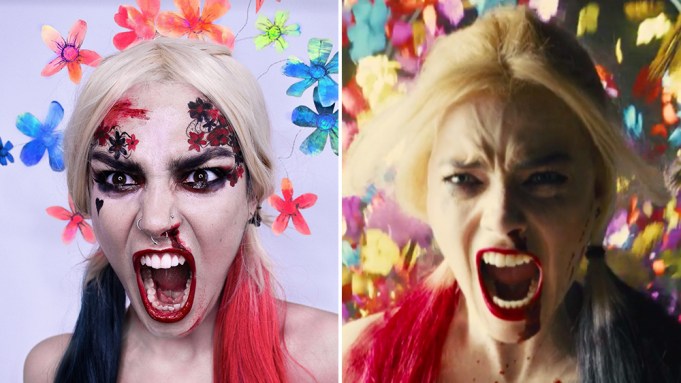 One of the most memorable scenes from James Gunn’s “Suicide Squad” comes almost exactly an hour into the film, as Margot Robbie’s Harley Quinn goes on a murderous rampage through a Corto Maltese mansion, where she’s jailed for killing the country’s dictator (and short-lived lover).

Putting her anti-hero skills to use, she breaks free from her shackles by picking a lock with her feet before enthusiastically killing every guard that stands in her way. As animated flowers and hearts spill out from wounds where there should be blood, and a cunning smile takes over her face where there should be distress, viewers are reminded why Quinn is, and always will be, one of DC’s greatest stars.

It’s this scene that makeup artist Hannah Cunningham pulled inspiration from when putting together a fresh Harley Quinn-inspired look for Halloween.  “Her makeup becomes smudged and messy and her skin glistens with sweat, but of course she still look amazing,” Cunningham says of Quinn’s look in the climactic scene.”With every hit she makes, colorful psychedelic flowers explode from around her, so I wanted to incorporate these as a 3D feature.”

Eyes and lips are the eye-catchers in Cunningham’s Halloween look, which features bold red lips (painted on with KVD’s Everlasting Longwear Liquid lipstick) and darkened eye-lids (made possible by the pigmented shades in Beauty Bay x Jay’s Thirwell Palette). For the base, Cunningham made sure to apply a generous amount of Morphe’s White Concealer to achieve Quinn’s ghostly pale skin.

To replicate the entire look, see Cunningham’s complete video tutorial below, alongside every product she used. And to complete your Harley Quinn costume, you’ll want to check out our full pop culture Halloween guide, which includes her distinct red dress and pigtailed wig.

For any quality makeup look, you need to start with a good primer. You want your Halloween look to last all night, right? Cunningham agrees that a good primer is essential before applying foundation, opting for L.A Girl’s Primer Spray, which she says hydrates her skin without overloading it. “I want my base to be dewey and fresh, so that when I’m paling it down, it doesn’t look cakey,” she says.

Since eyeshadow plays a big role in Harley Quinn’s makeup, prepping the eyes is also a must. First, Cunningham applies one drop of Fenty Skin’s Priming Gel Eye-Cream below her tear ducts, before gently tapping it onto the area under the eyes. In addition to creating a moisturized base for foundation, it also “refreshes and hydrates tired eyes,” she says.

Next up are the eyelids, which Cunningham applies generously with Milani Eyeshadow Primer to create a firm base for the pigments she’ll apply later on, also tapping some below her lids to prevent runny mascara and eyeliner.

Moving on to the secondary base, a foundation: according to our cosplaying expert, you can’t go wrong with Mac’s Face & Body Foundation, doubled up with their Studio Fix Fluid. Mix one pump of each foundation, either on your hand or brush, before blending it onto the face and neck (no special tricks needed here!)

However, once you’ve let the foundation sit for a moment, Cunningham combines a mixture of Kryolan’s Shimmering Foundation in Silver and Mac’s Studio Fix Fluid, this time in a shade a few tones lighter than her normal color. “This combo gives medium coverage with a dewy glisten,” she says, noting that she uses a wide, flat-faced foundation brush to blend this all the way down her neck.  “I wanted to make it look as much like skin as possible so I needed to keep it full of shimmer and moisture,” she says.

To blanch the skin further, you’ll need white concealer. She dabs Morphe’s concealer underneath her eyes, cheekbones, T-zone and jawline,  tapping it into her skin with a dampened beauty blender. The white mixture works as a concealer to match the paleness of her base, she says, but also as a highlighter to brighten up the under-eyes and high points of the face. She adds that Morphe’s concealers also work well for cutting creases for eyeshadow.

“In the film, Harley has very dark, naturally styled brows, so this product was perfect,” Cunningham says about Hypnotize’s Brow Shaper, which she gently applies to her brows with its fine-tipped spool brush. “It holds the hairs without making it crusty, and is slightly darker than my natural brow, adding to that contrast against my base,” she says.

Next comes Harley Quinn’s edgy, perfectly smudged eyes. First Cunningham applies Mac’s Kohl Black eyeliner in Feline, coloring in her lids and lining her tearducts generously. Then, she goes in with her fingers to blend it in, “helping it look more disheveled and messy,” she says. Watch the video for the whole smudge-technique on display.

The intentional grunge doesn’t stop there, though…I mean, you do have to look like you killed dozens of men in one fellow swoop. Cunningham adds to the murderous glam with Beauty Bay x Jade’s Thirwall Palette which features highly pigmented shades perfect for bold eye looks.

Using a classic blending blush, she layers the black shade “Tourmaline” on top of the lids and tear ducts for a deeper color before going in with a mix of the red and burgundy shades (“Red Planet” and “Angel of the North”) on the crease for a pop of color.

If you fancy yourself a good artist (or, at the very least, have a steady hand), then you should try drawing on the flowers that Cunningham adds to her forehead and cheeks, alluding to the animated floral graphics that flood the scene during Harley Quinn’s murder spree.

She uses Clinique’s Pretty Easy Liquid Eyeliner for the floral outlines that sprout up from her temples and sit on her cheekbones, noting that its soft nib makes it easy to use while also boasting a deep black color perfect for eyeliner flicks.

Next, Cunningham blends the red and black shades from Mehron’s AQ Palette to fill in her flowers, using a fine-tipped eyeliner blush to avoid drawing outside the lines.  “The red and black blend so nicely and an added bonus is that they smell quite nice,” Cunningham says about the AQ Palette, which is one of her favorites.

Using another fine brush, Cunningham uses the same red hue to draw on a bloodied nose, and scratches on her forehead, jaw and neck.

Of course, you can’t forget about Quinn’s bold red lips. Cunningham first goes in with KVD’s Liquid Lipstick in “Nahz Fur a Too,” which she says “literally lasts all day long,” using a fine-tipped brush for a clean application. Then, she tops it with L.A Girl Lipstick in On Fire for a brighter, moisturized outer layer.

Finally, to finish off her eyes, she applies Diego dalla Palma’s My Toy Boy Mascara to her eyelashes, which she claims is “extremely volumizing and never crumbles.” If eyeshadow is part of your normal makeup routine, you know to keep your eyes open wide to avoid hitting your lid with the wet spool.

Remember the blood and scratches you drew on with the Mehron palette? Well, now you’re going to add a little more gore with Mehron’s stage makeup, adding droplets wherever you please to replicate Quinn’s battle scars. “I put this into a little squirt bottle to get more realistic blood drips,” Cunningham says, noting that a stippling sponge helps to smudge the blood and add a “grumpier appearance.”

Finally, Cunningham adds a layer of Danessa Myricks’ Colorfix Glaze to achieve a natural look of sweat…because, if nothing else, Harley Quinn’s rampage was a good workout. Cunningham uses an eyeshadow brush to blend the translucent pigment atop her lids, before applying the rest on her temples and cheekbones with a blending sponge, which she says is an easy way to achieve Quinn’s subtly wet appearance.

And voila! You’re ready for your javelin accessory.