Get Ready for the Emmys With ‘Top Chef’ Host Padma Lakshmi

Like everybody around the world, “Top Chef” host Padma Lakshmi has had to adapt to a new normal over the past year, getting used to cooking for smaller groups of people in the midst of quarantine — a big adjustment for someone with such a close relationship to food.

But as things start slowly inching back to normal, the acclaimed television personality and chef, who is up for two Emmys this year as executive producer and host of Bravo’s hit competition series, is looking forward to cooking for a crowd again. She won’t be attending Sunday night’s ceremony in person this year, since she’s traveling for the third season of Hulu’s “Taste the Nation,” but she says she and the crew will tune in virtually.

“I’m sure we’ll all be together on Sunday night on set, we’ll be celebrating regardless,” she tells Variety. “I’m really looking forward to being able to have those kind of bigger parties again. But for those people who are getting together, I think it’s a nice excuse to stay home and have people who are close to you and in your circle and celebrate.” 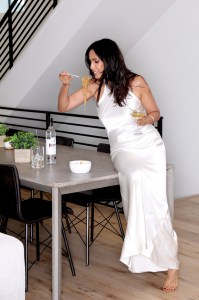 Although her own “party” on Sunday night might look a little smaller than usual, she is still the hosting queen — not just on television, but in her own home where she utilizes everything from cocktails to decor to food to connect with other people. And she has more than a few tricks up her sleeve for those looking for the perfect celebratory get-together on Sunday night.

From a “very dirty” martini made with Ketel One Vodka to handmade ceramic plates from Etsy, here are Lakshmi’s must-haves for the perfect Emmys viewing party.

“I like my martinis very simple with Ketel One and dry vermouth, I don’t use sweet vermouth,” Lakshmi says. She adds a twist with  Spanish olives and pickled jalepeños for added spice. “In fact, I like my martinis really dirty so sometimes I’ll throw in Spanish olives but  jalapeño-stuffed olives are really the best,” she says. “I buy a Mexican brand called Embasa, and I’ll often take a teaspoon or half a teaspoon of pickling and add it to the martini.”

This year, she’s using the Emmys Cocktail Courier Kit, which features all the ingredients needed to make a dirty martini to her liking. Plus, it includes enough for six people so you won’t have to sip alone.

Lakshmi always opts for a spicy companion for her martinis, often pairing her drinks with spicy or salty nuts. “I think any type of curry or spice with cashews or pecans work well,” she says. But in general, she says, “I tend to like salty crunchy things when I’m having cocktails. I don’t like sugary appetizers.”

‘Tangy Tart Hot and Sweet: A World of Recipes for Everyday’

“There’s a flauta recipe that’s a great appetizer in ‘Tangy Tart Hot and Sweet,'” Lakshmi says. “The flautas have cheese and mushroom but you can really substitute any vegetable like bell pepper or butternut squash. These flautas are amazing, especially because I serve them with a mint chutney that’s really, really spicy and herbacious and fresh.

Tangy Tart Hot and Sweet: A World of Recipes for Everyday $39.89

Lakshmi says she finds her best decor pieces by stumbling upon them at flea markets or while traveling but she also goes to Etsy when looking for a unique piece to add to her collection. She recently took part in a collaboration with the e-commerce company, where she teamed up with small businesses on the site to promote her favorite products.

“I like the idea of getting something on Etsy because you’re usually supporting independent entrepreneurs and makers which is why I did that collaboration,” Lakshmi says. “It was to highlight women-owned and BIPOC businesses.”

This four-plate set was one of her picks. Each dish comes in a different size, perfect for serving up pasta, ramen, stews, snacks and fruit.