On Tuesday night, the eve of the 78th annual Venice Film Festival, the Hotel Danieli and Variety co-hosted a rooftop party honoring fest topper Alberto Barbera and the Biennale, its parent organization, with its International Achievement in Film Award.

Variety international editor Manori Ravindran presented the prize to Barbera and Roberto Cicutto, the president of the Biennale.

The event’s theme was “Stairway to Parasite,” a tribute to director Bong Joon Ho, this year’s Venice Jury President, who posed for paparazzi and mingled with fellow jurors Virginie Efire, Cynthia Erivo and with guests including Italian actress Alba Rohrwacher and supermodel Madisin Rian. The DJ mixed lounge music with vintage Italian hits such as popstar Gianni Morandi’s 1960s love song “In ginocchio da te” which features in a key “Parasite” scene.

Everything, from the exotic cocktails to the food –– which included gold-leaf topped fish concoctions, steamed mini-pizzas, spicy green noodles, and a tofu dessert –– was inspired by “Parasite.” 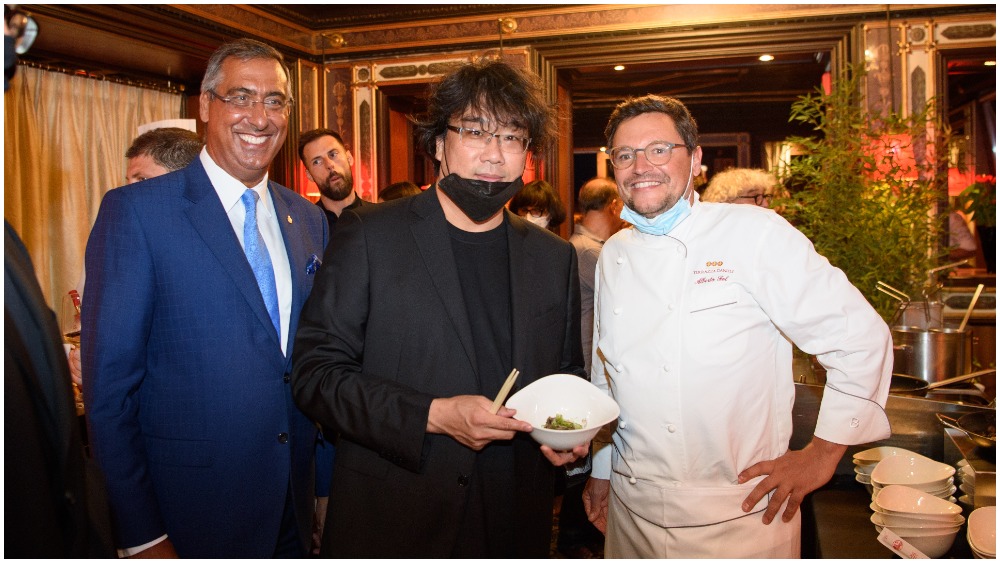 “What we did last year didn’t just make us proud of being the only international festival that happened,” said Cicutto. “We are very proud that we learned how to do it and we passed the formula [for success] to the other festivals,” he added.

Barbera underlined that, thanks to the Biennale’s support, for the past 10 years he’s been working  on an ambitious project: “to bring back to Venice the prestige that it had in the past and to redefine the festival’s profile.”

“I think Venice has been one of the most innovative festivals,” he said.

Barbera added that he’s also managed to “bring back to Venice most of the film professionals that in the past had decided to skip it to go somewhere else, for example: Toronto.”

Speaking to reporters inside the party, Bong said he considered it “a great honor” to serve as the jury president at Venice.

The latest edition of the Venice Film Festival will open with Pedro Almodovar’s “Parallel Mothers,” starring Penelope Cruz. Other high-profile premieres to screen at the event known as official start of the fall awards season include Denis Villeneuve’s “Dune,” Pablo Larrain’s “Spencer” and Jane Campion’s “The Power of the Dog.”