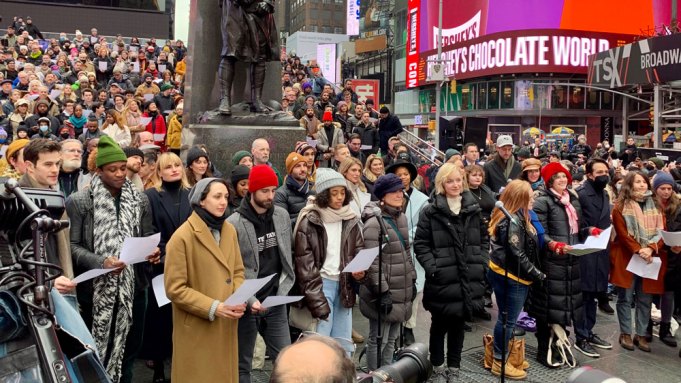 On Sunday in New York City, the Broadway community gathered to honor, mourn and celebrate the late composer and lyricist Stephen Sondheim, who passed away at the age of 91 on Friday.

On the red stairs above TKTS in Times Square, as the first flurries of the winter season drifted down on the city, members of every Broadway company — joined by Lin-Manuel Miranda, Sara Bareilles, Josh Groban, Kathryn Gallagher and Lauren Patton — gathered in a chorus to sing “Sunday,” the heartrending act one finale to Sondheim’s “Sunday in the Park with George,” which earned the eight-time Tony-winning composer and lyricist a Pulitzer Prize for drama in 1985.

“Let us pass,” the chorus sang, “through our perfect park.”

In “Sunday in the Park with George,” a masterpiece about the personal toll of dedicating oneself to art, “Sunday” assembles a tableau vivant of Georges Seurat’s famous pointillist masterpiece, a moment of artistic genius that is both fleeting and forever. In the Broadway canon, Sondheim’s “Sunday” is as close to religious communion as anything. At his passing, the song offered a bittersweet tribute to the lasting artistic contributions and uncompromising devotion of Broadway’s greatest composer.

“This felt like church,” Bareilles told Variety after the performance on Sunday. “In his remembrance, we did what theater does best. We sang and raised our voices and came together in community.”

During the celebration, Miranda offered a sermon of sorts. Foregoing a speech, he opened Sondheim’s “Look I Made A Hat,” an annotated anthology of the composer’s lyrics, and read from a few passages before the crowd.

“Once during the writing of each show, I cry at a notion, a word, a chord, a melodic idea, an accompaniment figure,” Miranda read from Sondheim’s words. “In [‘Sunday in the Park with George’], it was the word ‘forever’ in ‘Sunday,’” Miranda continued, beginning to choke up. “I was suddenly moved by the contemplation of what these people would have thought if they’d know they were being immortalized.”

After his remarks, Miranda stepped down from the director’s podium to join the chorus as they sang “Sunday” for a second and final time. On the steps, Broadway, and its collected actors, directors, crew members and composers, wept in mourning.

“Everybody who’s here has a touchstone for why Sondheim’s music has brought them to this place,” Groban told Variety after the performance. “And whatever part of the entertainment industry we’re in, everybody is here because we were first influenced by Sondheim’s music. To mourn his passing is a crushing blow.”

“‘Sunday,’ is about capturing moments and holding on to them while we have them, even the ones that might seem ordinary,” Groban said. “It’s a song about gratitude, about making sure to hold each other close.”

The event, produced by Erich Bergen, was co-presented by the Broadway League, the Times Square Alliance and Playbill. The participants were conducted by Michael J. Moritz.