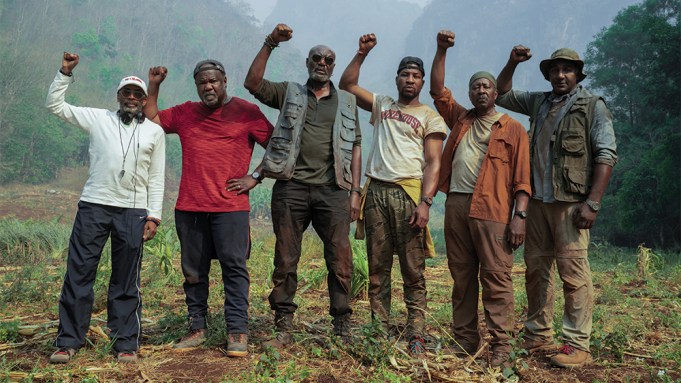 In addition to the two-night run, another free screening is planned for Hollywood Post 43 military veterans in celebration of National Vietnam War Veterans Day (observed on March 29).

“We are extremely gratified to present this film on the big screen for L.A. audiences and Vietnam veterans alike,” theater director Bill Steele said in a statement. “It’s a different take on the war, made by a filmmaker with a unique cinematic style and storytelling acumen to bear on always-relevant themes.”

Co-written and directed by Spike Lee, “Da 5 Bloods” shares the story of four Black Vietnam War veterans (Delroy Lindo, Clarke Peters, Norm Lewis and Isiah Whitlock, Jr.), who return to Vietnam to recover the remains of their fallen squad leader and the fortune they left behind, battling the physical and psychological scars of the war along the way. Jonathan Majors and the late Chadwick Boseman round out the film’s main cast.

Tickets for the event start at $65 per car, and include candy, soda and unlimited popcorn for all attendees. Proceeds from the event will benefit veterans aid programs.

The Hollywood Legion drive-in cinema has a 30-car capacity and maintains strict COVID-19 safety restrictions during screenings. The location, just south of the Hollywood Bowl, has been open to the public since October, operating seven nights a week while theaters in the city remain closed due to the ongoing pandemic.

Reservations for the event must be made online ahead of the screening. Tickets and more information are available at HollywoodLegionTheater.com.