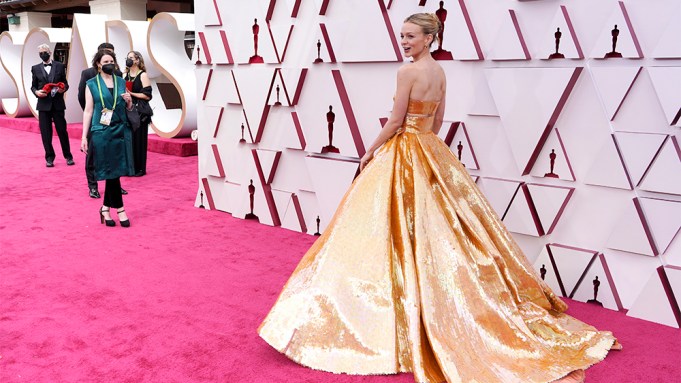 On Sunday morning, Hollywood awoke to the news of the sudden passing of fashion designer Alber Elbaz, who died at 59 in Paris from COVID-19. The one-time creative director of Lanvin counted Natalie Portman, Kim Kardashian, Meryl Streep and Harry Styles among his A-list fans.

But just as the fashion world mourned the loss of an icon to the pandemic — a harsh reminder that the virus is still wreaking havoc across the globe — it simultaneously provided a wondrous, fleeting respite from the realities of the last year in the form of a glamorous, socially distanced red carpet at the 93rd annual Academy Awards in Los Angeles on Sunday afternoon.

A memo sent out to attendees outlined the dress code for the occasion as “inspirational and aspirational,” heralding a return to the magic of a live ceremony after months of mostly virtual awards shows and Zoom fatigue. Coinciding with progress on the vaccine rollout and an overall decline in COVID-19 transmission numbers, a scaled-back Oscars red carpet and show, held at Union Station in downtown L.A., delivered on that celebratory promise.

From the custom cobalt blue Dundas jumpsuit and hooded cape worn by best original song winner H.E.R. to “Ma Rainey’s Black Bottom” star Colman Domingo’s electric pink hand-beaded Atelier Versace suit, bold and vibrant colors dominated the carpet, as if to signal a brighter future as pandemic restrictions continue to lift. “[Colman’s look] is inspirational with its beautiful color and it symbolizes happiness and joy,” says Wayman Bannerman, one half of the styling duo Wayman + Micah, along with Micah McDonald. “And the aspiration comes from the fact that it’s all hand-done beading and it took 140 hours to make.”

Self-expression was also on full display, as seen with the likes of supporting actor nominee LaKeith Stanfield, who confidently stepped out in an androgynous, disco-ready custom Saint Laurent jumpsuit. “LaKeith is so playful,” says his stylist Julie Ragolia, who worked with designer Anthony Vaccarello and the Saint Laurent team to customize Stanfield’s ensemble featuring a belted waist and white shirt with oversize lapels — a riff on a Saint Laurent jumpsuit from Vaccarello’s Spring 2021 womenswear collection that had caught Ragolia’s eye.

“Those looks stuck with me and when I heard of LaKeith’s nomination, it was literally the first thing that popped into my head,” says Ragolia, who also outfitted best actor nominee Riz Ahmed in a black Prada suit with the unconventional pairing of a mock turtleneck and cummerbund. “These are combinations that have never to my knowledge been on an Oscars red carpet before, so we just wanted to play with that irreverence and subversion in a very respectful, and still elegant and formal way,” she says.

And while they might not have been successful in manifesting a best actress gold statuette, category nominees Carey Mulligan and Andra Day both hit the carpet in statement-making gilded looks. Day wore a slinky cut-out custom Vera Wang gown fashioned in metal (which required the help of a professional welder to create), while Mulligan opted for a fairy tale-worthy sequined Valentino ballgown skirt and matching crop top that revealed a sliver of toned abs. Two-time nominee Leslie Odom Jr. also went the same route in a shimmering Brioni suit woven in 24k gold thread used exclusively by the Italian fashion house and The Vatican (talk about divine intervention).

Yet despite the much-needed escapism offered by the ceremony, the effects of the pandemic still rippled across the red carpet, as seen in some instances with a more conscious approach to fashion. “We wanted to be mindful of the fact that there are people going through a lot right now, so in our own, we wanted to be cognizant of that in our choices,” says Ragolia, who, together with Ahmed and Stanfield, opted for looks crafted in sustainable fabrics.

COVID has decimated the fashion industry as we know it, leading to an elimination of some 300,000 jobs, according to estimates. But there was proud acknowledgement on the carpet of the hundreds of hours of craftsmanship behind a handful of intricate looks, including the 300 hours it took to make Zendaya’s canary-yellow chiffon Valentino gown, and the 140 hours of beadwork (including more than 62,000 sequins) that went into director Regina King’s custom baby blue Louis Vuitton look (also styled by Wayman + Micah), complete with dramatic butterfly sleeves. Yang also noted how happy she was to see her fellow stylists as well as hair and makeup artists getting back to work. “It’s been a very difficult year,” she says. “These are all friends of mine who have not worked, who have lost health insurance. Some of them have caught the virus and got sick. I was so happy to see all of them working.”

But while attendees were happy to forgo face masks for the night (everyone was subject to rigorous COVID testing beforehand), a pair of leather gloves, worn by best supporting actress nominee Glenn Close to complement her custom, crystal-bedecked Giorgio Armani Privé tunic and pants served as a proof that maybe we’re not quite ready yet to leave the vestiges of pandemic fashion behind, after all.