Jay-Z and Beyoncé Turn Heads at ‘The Harder They Fall’ LA Premiere with Jonathan Majors, Regina King and Jeymes Samuel 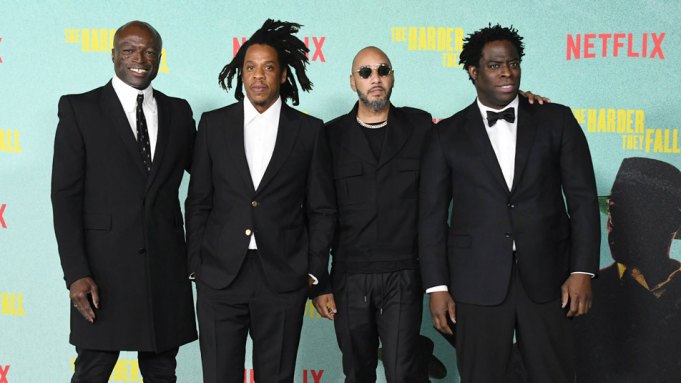 Variety cover star Jeymes Samuel could not have been more ready for his big moment. The writer, director, producer and composer was suited and booted as he stepped onto the bright blue carpet for the Los Angeles launch of his wild Western “The Harder They Fall” on Wednesday night at the Shrine Auditorium.

Since the movie presents a fresh take on the dusty genre, the dress code was super fly. Samuel, stars Jonathan Majors, Regina King and Deon Cole, and the film’s producer Shawn ‘Jay-Z’ Carter went for an “all Black everything” moment, all showing up swagged-out in head to toe onyx. Of course, absolutely everyone in attendance hoped to catch a glimpse of Beyoncé, who’d posted photos glam snaps on Instagram ahead of the screening’s start, teasing photographers and reporters into thinking she could make a red carpet appearance. (Spoiler alert: She did not. But Queen Bey did turn heads at the star-studded after party.)

“It means everything meant to be premiering this movie after so long,” Samuel told Variety on the carpet. “It’d been in my brain since I was a kid but really for the last 15 years hard. It’s just an amazing thing.”

The first-time feature filmmaker continued to wax poetic about the movie — which debuts theatrically on Oct. 22, before launching on Netflix Nov. 3 — before his interview was bombed by his other longtime collaborator, rapper Jay Electronica. “He’s a walking collaboration and he deserves everything you see tonight and more,” Jay said of Samuel.

From Majors’ perspective, the writer/director/producer/composer has captured something truly special with “The Harder They Fall.” The Texas-born actor stars as real-life Black cowboy Nat Love, transported back into the 1890s, where Samuel presents a host of real players — like Rufus Buck (Idris Elba), Gertrude Smith (King), Cherokee Bill (LaKeith Stanfield), Stagecoach Mary Fields (Zazie Beetz) and Bass Reeves (oft considered to be an inspiration for “The Lone Ranger,” played by Delroy Lindo) — within a fictional context.

“It’s not just Nat Love, but he’s at the forefront in this movie, so it means a great deal for me, for the homies, for my people where I come from,” he adds.

One of the reasons why Majors believes this movie could be so powerful is due to the limited lens through which Western stories have been told historically. But with Samuel’s take on “The Harder They Fall,” he says, “We broke down that narrative, and expanded that narrative, so now the Western is a whole different world. It’s actually what it was supposed to be — a new frontier. A place where liberty remains; a place where freedom is actually attainable.”

Black excellence reigned throughout the event, with stars like Taraji P. Henson, Lil Rel Howery, Evan Ross, Logan Browning, Teyana Taylor, Kehlani, Karrueche Tran, Bre-Z and more turning up for the big event. Director Baz Luhrmann, who’d collaborated with Samuel on “The Great Gatsby” when Jay-Z tapped him to be the movie’s executive music consultant, was also on hand to celebrate the budding filmmaker.

“He is now what he was then, which is an unbelievable force of nature,” Luhrmann explains. “He will always take the positive high road, and he lifts you up. He’s the kind of person you want to be around.”

After the screening ended, guests were ushered to a separate area of the Shrine, which had been converted into King’s character “Treacherous” Trudy Smith’s Saloon. Guests, including Jesse Williams (who starred in Samuel’s “They Die By Dawn” and Jay-Z’s “Legacy” music video), Nas and Netflix CMO Bozoma Saint John and VP of original film Tendo Nagenda, perched on plush, lounge-style sofas stationed around a stage at the center of the venue, where a full life band waited, primed and ready to perform.

Back to Beyoncé — the iconic entertainer did not take the stage, instead graciously fielded hellos at her booth, but kept things low-key during the live show, sitting surrounded by her nearest and dearest — including her mother Tina Knowles-Lawson and Richard Lawson; Kelly Rowland and Tim Weatherspoon; and Alicia Keys and Swizz Beetz — all on hand to support Jay-Z and Samuel.

After an hour of mixing and mingling — and, for Samuel, Majors, King, Cole and Jay-Z, fielding congratulations on the film — it was time for Samuel to emcee the musical portion of the evening. Alice Smith was first up, blowing the roof off the venue with her powerful pipes, before Grammy-winning musician (and Samuel’s older brother) Seal took the stage.

“I’ve never been more proud than seeing the king, the Black god do his thing,” Seal said of Samuel before launching into a passionate rendition of his 1991 smash “Crazy.”

Samuel had more surprise performances in store with Tiffany Haddish jumping on stage to perform Tina Turner’s “Proud Mary” and Saint Jhn dropping a few bars. The jam session went on until nearly 2 a.m. with Seal returning to give guests a “Kiss From a Rose” as Hova took the stage to rap some of his greatest hits including “Dirt Off Your Shoulder” and “Big Pimpin.” On Thursday morning, Samuel shared scenes from “the saloon” on social media.