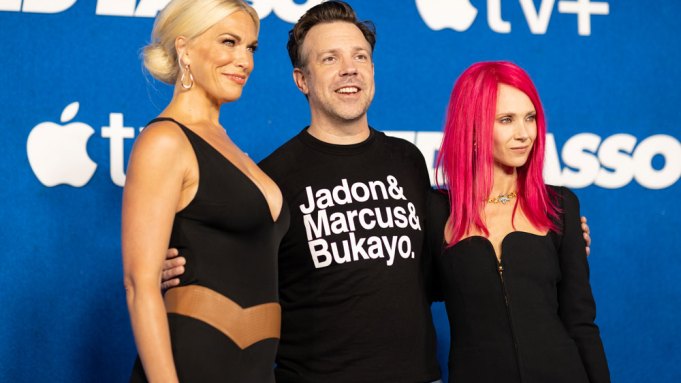 Jason Sudeikis showed his support for the English soccer players who were targets of racial hate after their team lost the Euro 2020 final on Sunday.

At the season 2 premiere of “Ted Lasso” in West Hollywood on Thursday night, Sudeikis wore a sweatshirt that was emblazoned with the first names of Marcus Rashford, Bukayo Saka and Jadon Sancho. You can buy your own version of Sudeikis’ viral shirt here. His black and white Nike sneakers also read “Equality” along the heels.

Is it true that Hannah Waddingham told her #TedLasso co-star Brett Goldstein about his Emmy nominations while he was in his underwear? "It is completely true," says Goldstein. https://t.co/RoHElusy7B pic.twitter.com/COvznv9xNg

A massive blue carpet was constructed on the top of the Pacific Design Center’s parking structure in West Hollywood, and a giant blue soccer ball was featured at the end of the carpet with a Lasso’s signature “Believe” sign greeting guests at the top of the arrival line.

The event took place just days after “Ted Lasso” scored 20 Emmy nominations, a record for a freshman comedy. “I’d rather be the disco ball that light gets fractured off of, and when 20 nominations are spinning around and I play the guy the dang thing is named after, it feels really nice,” Sudeikis told Variety.

Hannah Waddingham, who plays Rebecca and is on the current cover of Variety with co-star Juno Temple, said she got to break that news to writer and actor Brett Goldstein that he had been nominated because they were staying in the same hotel at the time of the nominations announcement. Goldstein was in his underwear when Waddingham knocked on his door. “Little tiny tiny boxers, I call it more of a thong,” Goldstein cracked before recalling what went through his mind when he got the Emmy news: “’Is this a prank? Am I dreaming?’ I do like that from now on I’ll be ‘Emmy nominee Brett Goldstein.'”