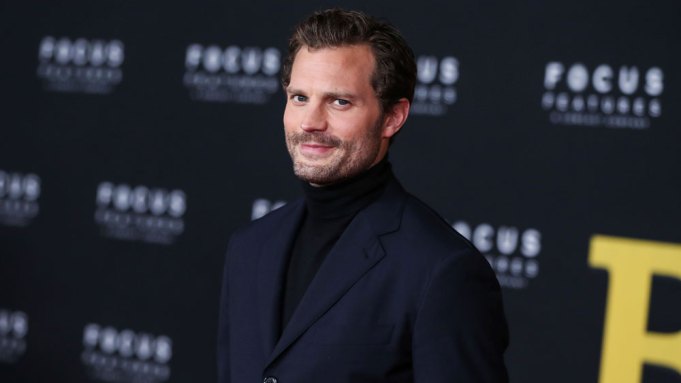 If you weren’t aware that “Belfast” star Jamie Dornan has vocal chops, prepare to be amazed.

On Monday night, Dornan surprised guests with a sweet serenade — performing “Everlasting Love” during the film’s post-premiere reception at the Academy Museum of Motion Pictures.

To clarify, Dornan doesn’t just love to karaoke. The actor, who plays Pa in Kenneth Branagh’s “Belfast,” performs the tune in the film. The scene, which ends in a dance between Pa and Caitríona Balfe’s Ma, has quickly become one of the semi-autobiographical movie’s most buzzed-about and beloved moments.

Here’s how it happened: the house band paused their set and called Dornan to the stage. The actor (who seemed just a wee bit nervous) sweetly obliged, taking the microphone and giving party guests (and their sea of cell phones recording it all) a performance to remember.

On the red carpet ahead of the screening, Dornan joked with Variety about the prospect of performing the tune before a crowd. “Let’s see what happens, I need a couple more drinks in me before I do that sort of thing,” Dornan said, with a hearty laugh.

When asked about performing in front of an even bigger crowd — like at the Oscars, where “Belfast” is a frontrunner for best picture, for example — he added: “Listen, if that call comes, I’ll have to give it some careful consideration.”

Apparently Dornan was able to muster the courage (liquid or otherwise) for Monday night’s serenade, exiting the stage with a rock star leap into the crowd, where Balfe and 11-year-old Jude Hill had been dancing along. After the performance, he told Variety that singing the tune was a lot easier when he’d had time to rehearse like he’d done for the film. But the crowd certainly didn’t seem to notice any rustiness, greeting the star with kudos and congratulations for the impromptu show.

Dornan also had a sweet exchange with Hill, lifting his on-screen son in the air in celebration. The special event marked Hill’s first trip to Hollywood, and with his mother Shauneen along for the ride, he soaked up every minute of the action.

“Can you imagine? Like it’s nuts, he’s still such a young kid. It’s his first-ever job,” Dornan said, praising the young star for the way he anchored the film.

“[This movie] hinges so much on him giving a proper performance and the rest of us just trying to cling one around him. I think that’s the overriding thing with Jude — great actors, they take direction seriously,” he continued. “So hopefully he harnesses that. I imagine there are some very exciting things to come. We love him and are so proud of him.”

Branagh also gushed about the young talent, sharing what it meant to be able to witness his Hollywood debut.

“A year ago, I met him — he was an Irish dancer, he supported Liverpool Football Club and he did a bit of drama,” Branagh noted. “A year on, he’s on a red carpet in Hollywood. He’s still charming, he’s still fine. His family is still keeping his feet on the ground, but he’s enjoying the heck out of it.”

“And that’s a beautiful thing to see, because that joy, that direct ability to express generously a love of life, is right at the center of this film,” Branagh added. “I’m glad he’s having a wonderful time because he’s blessed the movie with his energy, and I’m glad we’ve given him the ride of his life thus far.”

From Hill’s perspective, the whole experience — from booking the role of Buddy (a version of Branagh, who also directed “Thor,” one of Hill’s favorite MCU characters) to walking the red carpet in Los Angeles — has been “just crazy and amazing. But I’m just loving it, and going with the flow.”

“For my mom to be here is very, very important, because I think she can resonate with the story as well. I’m glad she’s here,” he said.

Balfe also had family on her mind, reflecting on last week’s homecoming premiere at the Belfast Film Festival, to which she brought her mom.

“It was the first time that my mom has been able to come to a premiere of mine. She came with my sister, and I think everyone had family there and it was a very emotional night,” Balfe recounted.

“To bring a film called ‘Belfast’ to Belfast just felt really special,” she continued. “I think they would have let us know if they didn’t appreciate it. Luckily, it went down well, and we had such a good night. I think it was quite a few sore heads the next day.”

As for Balfe’s mother’s review of the movie: “She didn’t want the film to end, which I think is one of the best compliments. She was just really touched.”

The Los Angeles premiere marked yet another family reunion, with Ciarán Hinds also in attendance to round out Branagh’s on-screen clan (Judi Dench did not travel for the premiere), and the whole crew was still buzzing from the Belfast screening. Hinds — who, like Branagh, is also from Belfast — said the event was “very emotional.”

“Jamie — to be honest, I’ve never seen him like that, because Jamie is such a cool man — he was very nervous,” Hinds recalled. “I was inquisitive as to which way the cards would fall because I take nothing for granted. Because you’re going to play to a home crowd with, in a way, their own material. But then you realize there are certain people with agendas, who wanted to be one way or the other way. This is a film without an agenda. It’s a film about humanity.”

For Branagh, who was inspired during the COVID-19 pandemic to finally write this film about his family’s experiences in the late 1960s, the homecoming was particularly weighty.

“First of all, I haven’t been in a room with 1,400 people watching a movie. I haven’t seen 1,400 people who have a complete investment in this place — who know every brick in every street,” Branagh recalled. “Hometown crowds can be pretty rigorous, but the electrical response to it was so lively to all the sorrows and all the joys.”

“By the time we reached the end, Patrick Kielty, the wonderful Irish comedian who was running the Q&A said that, basically, the film had provided a sort of redemption and a kind of outlet at this time — a focal point for something that was really valuable,” the filmmaker shared. “It was really one of the greatest nights I’ve ever experienced as a professional.”