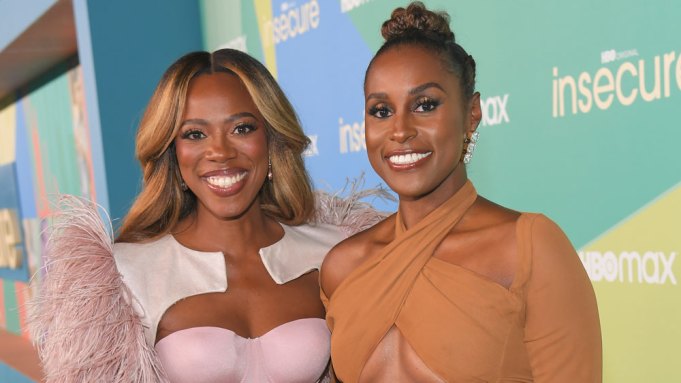 As “Insecure” creator and star Issa Rae stepped onto the teal carpet for the hit HBO comedy’s final season premiere on Thursday night, a fog cloud rolled in — with the mist only adding to the feeling of nostalgia already in the air.

The outdoor celebration could best be described as a scrapbook come to life, with set photos and memorable quotes from the previous four seasons lining the walkways of the pop-up venue at Kenneth Hahn Park in South L.A., Rae’s hometown and the backdrop for “Insecure.”

“We are in my neighborhood tonight. We are surrounded by people I love. It’s almost raining, it’s perfect,” Rae told Variety about walking down memory lane for the celebration.

While the weather threatened rain (that fortunately never came), Rae and her “Insecure” crew waxed poetic about saying goodbye to the show. With showrunner Prentice Penny and co-stars Yvonne Orji, who plays Molly, and Jay Ellis, who plays Lawrence, by her side, Rae kept her emotions in check, declaring that there’d be no tears shed this night.

“I’m in celebration mode right now,” Rae explained. “But for the most part, I’m just I’m ready to release it into the world.”

The fifth and final season (dubbed “Season Bye-ve”) begins Oct. 24 with a few questions looming in fans’ minds and on reporters lips: Has Issa and Molly’s friendship really been repaired? Is there a future for Issa and Lawrence now that Condola (Christina Elmore) dropped that pregnancy bombshell? And, most importantly, how is this series going to end?

During her recent press tour, Rae has been open about the pressure to wrap the show up perfectly, admitting that she re-wrote the final scenes just two weeks before filming.

“It just didn’t feel right,” Rae said of the original ending. “I think it was a good finale on its own. However, I just didn’t feel like it aligned with the story that we have been telling for five seasons, much less even this season. It felt like the ideal version.”

About making the quick change, she added: “I just wanted to make an ending that felt more realistic and true to the characters.”

Penny, who directed the show’s final episodes, echoed both Rae’s early qualms and ultimately her confidence that they got it right.

“HBO has such a history of people having strong opinions about finales,” he explained. “For us, we were like, ‘OK look we obviously want this show to be satisfying, but satisfying to us.’ Trying to guess what people want is super hard, and how can you hit that target?”

So, instead, Penny, Rae and the team (including exec. producers Melina Matsoukas and Amy Aniobi) focused on where they want to see the characters go after the cameras cut away.

“That just freed us up from all the pressure of tying it up in a bow,” he said. “I feel like we told every story we could, the best way we could, and just gave people what we thought was our best. I don’t know what more we could have done except making it an hour.”

Presumably that means fans are in for an emotional roller coaster of mirror pep talks, work woes, dating drama and all-too-relatable awkward moments as the show winds to a close over these last 10 half-hour blocks. On a more macro scale, a greater question remains — what will “Insecure’s” legacy be when all is said and done?

“I hope that people can look at our show in the same way that I looked at shows that came before me that inspired me,” Penny said, calling out classic series like “A Different World,” “The Cosby Show” and “Living Single.”

“They made me believe that doing my dream was possible,” he explained. “So I hope that when people see our show and shows like ‘Atlanta,’ ‘Queen Sugar’ and ‘Black-ish’ they also feel inspired.”

Ellis suggested that the culture will decide how the show — which has racked up 11 Emmy nominations (one win) and a Peabody Award — will be remembered.

“I hope that folks feel like they got a window into a world that reflected theirs and characters that reflected them, their friendships, their romantic relationships and their work situations,” he said. “Hopefully they felt seen and felt represented and got to laugh and cry along the way.”

Orji noted that the legacy question also extends to the personal evolution of the cast and crew of “Insecure” and their careers since the show’s start.

Rae’s road from “Awkward Black Girl” to a massive overall deal with WarnerMedia is legendary, while Penny just inked his own deal with Disney’s Onyx Collective. Orji debuted her first stand-up comedy special “Momma I Made It,” her first book “Bamboozled by Jesus” and is next set to host Amazon’s 2021 edition of “Yearly Departed,” while Ellis is starring opposite Tom Cruise in the long-awaited “Top Gun: Maverick.”

“It speaks to the big-heartedness of Issa Rae to give so many people their first or second big opportunity, and then it speaks to the HBO just being a phenomenal partner and home for us, to get the eyeballs onto us,” she explained. “But it also speaks to what happens when you take a chance on talent.”

“Black talent do well. Black shows are successful,” she continued. “And I think every one of us has had an opportunity to level up and go actually spread our wings. That’s why I got these feathers on, because we’re all soaring.”

Inside the soiree, attendees cozied up under custom blankets and drank hot chocolate as they laughed, cheered and gasped their way through the first two episodes of the new season. There were also plenty of photo ops on site — Rae posed underneath a blue neon sign which read “Hella Out There,” while Orji posed under the purple “Lowkey Striving” sign that matched her feathered fit. Orji was also queen of the dance floor, serving her best Beyoncé impression and keeping the party hype, while fans and guests toasted to the end of the show with signature cocktails called “LA Girl,” “Miss Terious” and “I’ll Hurt Your Feelings, Boo.”