Continue to Variety SKIP AD
You will be redirected back to your article in seconds
Jul 6, 2021 7:36am PT 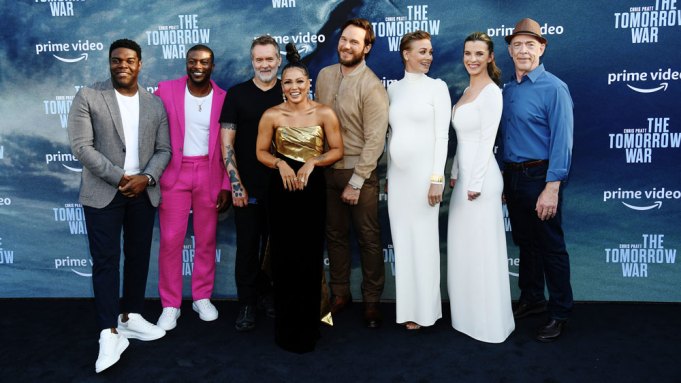 Yvonne Strahovski comes head-to-head with an alien army in her performance as Commander Romeo in “The Tomorrow War,” but the Australian actor says she’s also had a real-life extraterrestrial experience.

“This is a legitimate story. Back in 2006 I was sitting on a beach cliff with somebody, somebody witnessed this with me. And I saw what looked like a star drop down, do a couple of circles and then diagonally shoot back out into the sky, like into outer space. And I don’t know what does that,” Strahovski told Variety‘s Marc Malkin at “The Tomorrow War” Los Angeles premiere.

For the record, Pratt said he doesn’t believe in UFOs and beings from another planet. His on-screen father, J.K. Simmons, meanwhile, explained he doesn’t “not believe in aliens.”

Examining the audacity of mankind to believe humans are the center of the universe, Sam Richardson confirmed his acceptance of intergalactic creatures.

“I’ve always believed in aliens ’cause the idea that we might be the apex of intelligence and civilization, I mean look at people. If this is it, then all the intricacies of molecules just kind of stopped at the maskless wearing people — I don’t believe it,” Richardson said.

Betty Gilpin said she’s not a believer, but she had a message for aliens just in case she’s wrong: “If you’re real, I wouldn’t be an interesting person for you to take up. You should take someone else.”