Rita Moreno on Her ‘Just a Girl Who Decided to Go for It’ Doc: ‘This Is the Dream’ 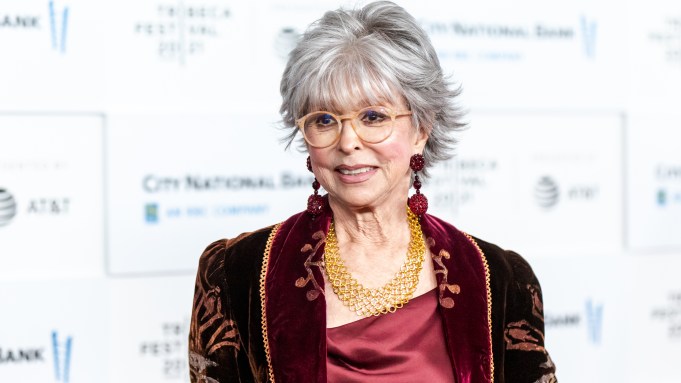 Hollywood icon Rita Moreno went for it — and the message is loud and clear.

Speaking to an audience at the Tribeca Festival 2021 premiere of her new uninhibited documentary “Rita Moreno: Just a Girl Who Decided to Go for It,’ the legendary EGOT winner boldly said about the filming, “I made a promise to myself that I would be exceedingly truthful. I thought that was important… There isn’t one iota of bullshit.”

At one of the world’s first in-person film festivals in over a year, Moreno had the audience thundering with applause during a two-minute ovation. The trailblazer then took the stage for a candid panel discussion as the sun set over the outdoor Hudson River theater at Pier 76.

The very personal documentary about Moreno’s storied life is the new crowning achievement taking a front place on her trophy mantle.

“This is the dream,” she told Variety earlier on the red carpet about the premiere.

While the film illuminates the determination of Moreno on her path to stardom, it also highlights the tragic struggles and nearly impossible barriers she fought to tear down as she forged the way for equality in Hollywood.

At 89 years old, the pioneer’s soulful presence at the event was reflective of a re-energized New York City emerging from the shadow of the pandemic.

“I am so ready for the world to see this,” she said with her arms pumping in the air. “I’ll be satisfied if a quarter of the world sees it!”

Knowing that her powerful journey is as poignantly symbolic as the world getting back on its feet, Moreno said: “I cannot be that demanding, but the more people that see it, the more inspired they will be because they get to see me. This is a woman you are looking at who has won these awards, but nobody knows the sadness and the pains. I want to say this is what I lived through, and you can, too.”

Showcasing determination and strength throughout the whole event, Moreno fully embraced the moment with her daughter Fernanda Luisa Gordon and the crew sitting by her side while the movie played.

“In this film, you see a life well led in a story that should have been told 30 years ago,” Miller said before the screening. “And you know the way the universe works. Everything happens when it’s supposed to happen. This is the time for her story to be told.”

When asked about her next big project, Moreno said, “This is the dream at the moment… we’ll see from there. I will be 90 in December, for Pete’s sake. You just don’t know.”

“Rita Moreno: Just a Girl Who Decided to Go for It” screens nationally on June 18.