For the 2021 Power of Women issue, Variety spoke with several women in the entertainment industry who are using their voices to benefit worthy causes. For more, click here.

When Amanda Gorman was 5 years old, she would pull her mom out of bed in the early morning hours to get her a pen and paper so she could write. 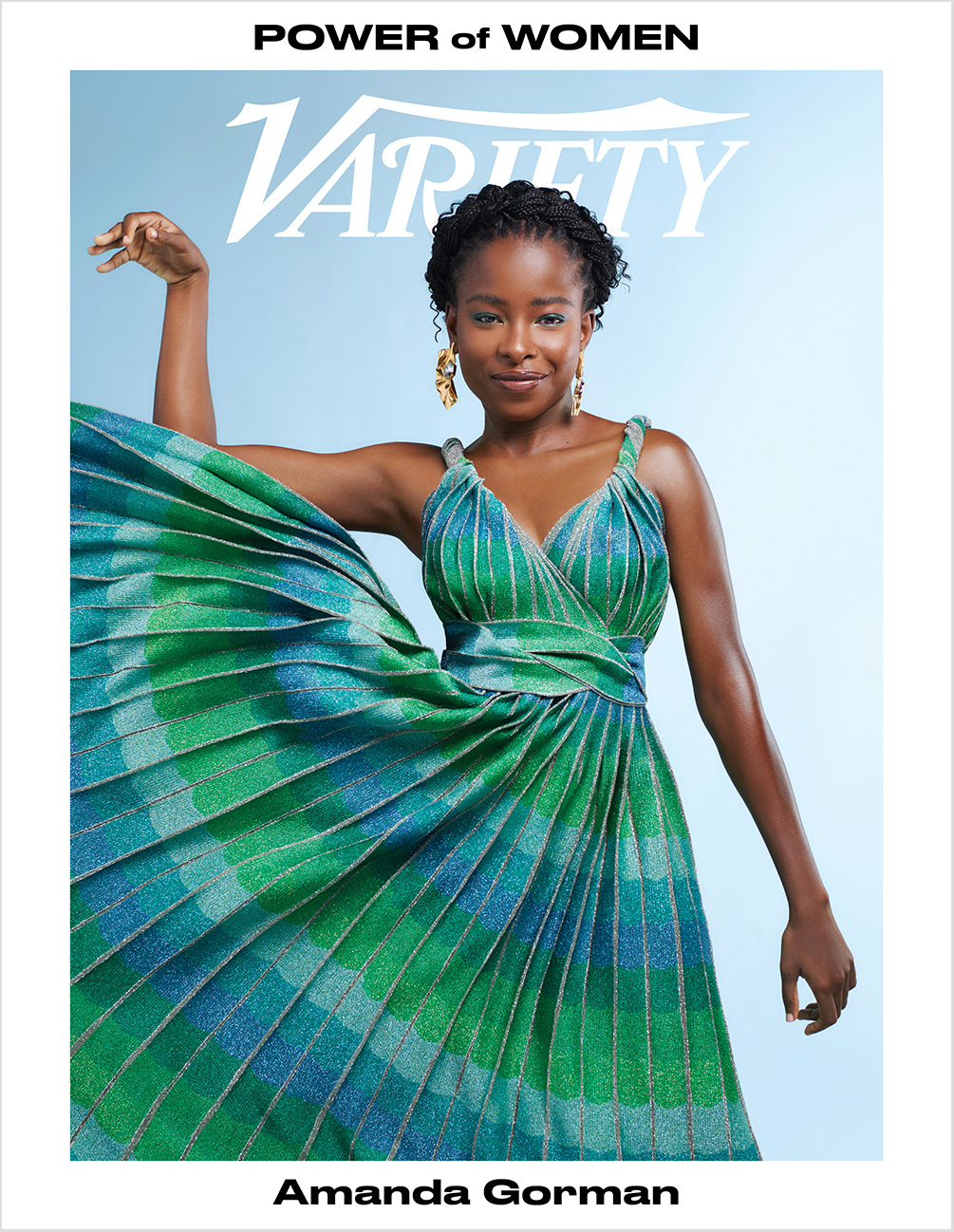 “She actually had to pay me a quarter for every day that I stayed in bed rather than wake her up so she could actually get eight hours of sleep,” recalls Gorman, now 23. “And then I could write later.”

It was Gorman’s mother, a sixth-grade English teacher, who told her young daughter that her voice was her superpower.

“Can you imagine that as a girl with a speech impediment how that felt like an oxymoron? And as I’ve grown up I understand that, as always, my mother was 100% right. My superpower is my voice.”

When Gorman was 14, her mom enrolled her in the nonprofit creative writing and mentoring organization WriteGirl to help her overcome her disability and gain confidence in her work. Gorman has fond memories of the adult women mentors she was paired with back then: “They gave me the confidence that I wasn’t an aspiring writer — I was a writer.”

Gorman never stopped writing, and her own experiences at WriteGirl have inspired her to give advice to other young artists. Her poetry has brought her enormous recognition as a young adult. She has already entered the history books as the country’s first National Youth Poet Laureate and the youngest poet ever to recite her work at a presidential inauguration, joining an elite group of legendary poets like Maya Angelou and Robert Frost to have that honor.

If you heard Gorman’s charismatic six-minute reading of her transcendent poem “The Hill We Climb,” about unifying a divided and struggling nation, at President Joe Biden’s inauguration, you might very well believe she will make good on her vow to become president of the United States. (She plans to run in 2036.)

Her desire to become president hearkens back to when she was 11 years old in math class talking about what she wanted to change in the world. “My math teacher looked at me and somewhat jokingly said, ‘Well, you should run for president.’ I said, ‘You know what? You’re right!’ … It became my ambition and my goal. It sprung this idea that I don’t just want to participate in society as a poet, but also as a politician.”

Gorman says the country is ready for “a new type of leader,” one who will govern by a “poetic spirit” and “cultural imagination.”

Gorman displays many of the markings of a natural-born leader — a searing intelligence, deep compassion and an uncanny ability to connect with the masses. Though small in physical stature, she’s a towering figure, wise beyond her years and a devout activist concerned about the world’s social ills, be it racism, sexism, police brutality, the climate crisis, human trafficking or animal cruelty. Yet, she maintains an optimistic view of life and humankind.

“It’s quite easy when you turn on the news to see a world that is vengeful and scarred and poisoned,” she says. “That’s what gets the shares, the headlines. … But as much evil as I see, there is far more good. I just have to make myself willing and open to seeing it.” That willingness, she explains, is what inspired the last line of her inaugural poem: “For there is always light, if only we’re brave enough to see it. If only we’re brave enough to be it.”

Bravery is the attribute she admires most about her mother, who raised her, her twin sister and their younger sibling as a single parent on the Westside of Los Angeles: “She instilled in me the value of speaking up for oneself, especially as a woman.”

In elementary school, when Gorman would stand up to a bully, she says, “I would come home, tell my mom and we would celebrate.”

While always supportive of her daughter’s passion for writing, Gorman’s mother worried that pursuing poetry as a career was risky because it was too unstable. “My mom always wanted me to sustain and support myself while doing what I loved the most,” says Gorman.

She first became interested in social issues at New Roads, a progressive private school in Santa Monica that she attended from K-12. Gorman says New Roads was a “socially and ecologically minded” institution that supported multiple expressions of intelligence. “That challenged me to think critically. I would say that it really awakened my kind of interrogation of the world from a very young age.”

In her newly published children’s poetry book, “Change Sings: A Children’s Anthem,” Gorman writes about societal themes such as not fearing change and using the power of voice to make changes “big or small” in the world, in communities and most importantly in oneself.

One of the main changes Gorman says she’s experienced is how her relationship with her own voice has evolved over the years.

“I had a lot of shame, a lot of guilt surrounding the fact that I had a speech impediment,” she says. “It felt like my voice was this scar that people could hear. As I’ve grown up and developed a stronger relationship with my own identity, I’ve come to recognize that it’s a strength and what I’ve gone through as someone with a disability has, if anything, given me my superpower, which is my ability to connect and speak with other people.”

Another significant change that Gorman has endured in her young life is going from anonymity to fame, which she describes as “terrifying in many ways, not feeling in control of your own image or voice.” Whenever she feels like she’s “in a storm or hurricane of attention or visibility,” she reminds herself, “I still have the most control over myself compared to anyone else.”

To keep herself grounded, she thinks of another piece of great advice from her mom: “She’s always quoting me from ‘Hamlet’: ‘To thine own self be true.’ If you stay true to yourself, then no matter what kind of winds blow against you, you become the oak that never moves.”

Gorman first realized she was a writer when she was about 8 years old: “I recognized that what I was doing was a craft in and of itself.” She tells a story of having an “amazing” third-grade teacher named Shelly, who was a published writer. “When I figured out, ‘Wow, this is something that women can do — they get paid for it; they can make a living off it — I realized that this wasn’t just a profession. It was a calling.”

Gorman, a self-described perfectionist who rewrote “The Hill We Climb” 22 times before she was satisfied, says she always does a ton of research before penning a word. “I try to find an opening and a history which can serve as a window for what I’m writing. If there’s something that makes me incredibly frustrated, confused or devastated, I try to follow that trail of inquiry into the past and use that to create poetry for the present and the future.”

Her favorite writers include Maya Angelou, Toni Morrison and Langston Hughes, and among the new generation of poets “who defy genre,” Ocean Vuong and Eve Ewing.

In addition to a special edition of her inaugural poem being published this past March and debuting at No. 1 on the New York Times, Wall Street Journal and USA Today’s best-seller lists, Gorman wrote two poetry books for publication this year. “Change Sings” came out this month, and “Call Us What We Carry: Poems,” which she describes as “a lyrical rumination on the past two years that we’ve experienced from the pandemic,” will arrive in bookstores on Dec. 7.

This month, Gorman signed an expansive three-year deal with Estée Lauder to be its first Global Changemaker. She will represent the company’s flagship beauty brand in ad campaigns and speaking events and also curate Writing Change — a set of grants worth $3 million — to promote literacy among girls and women.

Gorman says the three issues that are most important to her are equality, education and the environment: “I think those three really meet at the intersection because they quite literally affect us all. Every one of us lives on this planet. Each one of us in some way passes through a kind of educational experience. And every one of us deserves to be treated with dignity and respect.”