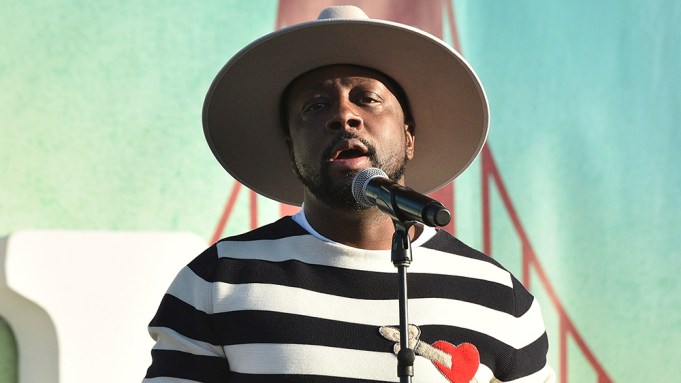 Wyclef Jean has always loved composing, and now he’s been at it full-time on season four of Showtime’s “The Chi.” This season picks up with  Kiesha (Birgundi Baker) meeting potential adoptive parents for her child, and Kevin (Alex Hibbert) telling his girlfriend Jemma (Judae’a Brown) that he loves her.

Creator and writer Lena Waithe wanted him to score her next film after she had heard him rescore her film “Queen & Slim” just out of a passion for the craft. “It’s something I’ve always wanted to do,” Jean says.

Waithe says of his work, “I loved what Wyclef was doing from the very beginning. He really taps into the emotion of the scene. He pulls you in like no one else can. The score is so important when it comes to storytelling, and we are always on the same page about what each moment needs.”

In an interview with Variety, Jean talked about how music is in his blood and in his DNA; he mastered music theory before even knowing what it was simply by playing church instruments by ear. Fifteen months of lockdown fed his creative soul, he says: He dropped a podcast, “Run That Back,” and covered Bob Marley’s “What is Love,” on top of developing a music app that will help composers and music supervisors source music.

You’ve been up to a lot with scoring “The Chi,” covering Bob Marley’s “Is This Love,” celebrating 25 years of the Fugees’ “The Score” and your “Run That Back” podcast. How would you say this past year has been for you?

For creatives, it’s been crazy. We breed creativity, inspiration and aspiration.

During COVID, I was trying to find time to develop a scoring and source app, something like Jingle Punks, the audio creative agency, but moving towards the future because I feel like source music is dead because they’re putting anything on there now. So, I’ve been working on this app, Sodo. Sodo is also a magical river in Haiti. It’s a place where our culture, the idea of spirituality, the drums and the Africana and that spirit come together.

With my target and the composers that I’m working within this format, half of them happen to be from the hood. They’re young kids 19 or 20 years old, and they love Gershwin and Miles Davis’ “Bitches Brew.”

And here you are, scoring “The Chi.” and composing episodes. How did this happen?

The art of scoring comes from high school. By the time I was 15 years old, my daddy was a minister and he had a church. Anyone that knows about church and the hood, there was always a new instrument that comes in every three weeks and you have to learn how to play it. So I think I was well-versed in 10-12 different instruments that I could play by ear, and I was the choir director. But I also had a love for battle rapping because it would stop me from getting into fights.

I remember being in the cafeteria playing the circle of fifths starting with the C minor 7, going down. I could hear it, and a teacher, Valerie Price, asked me where I had learned it. I told her, “I can just hear it.” I’ll never forget how she told me to close my eyes and play it. She asked me what I could hear as I played it. I said, “I see numbers: 1, 3 and 5. On my left hand, I see 1 and 5.” Keep in mind, I didn’t know what theory was, and she asked me about the instruments I played and what I didn’t play. I told her I didn’t play the upright bass because it hurt my fingers. The next week she started me on that.

My very first music video was me as an extra in “Don’t Sweat the Technique” by Eric B. & Rakim, playing the upright bass. That’s where the love started.

Now, I’m obsessed with theory. My first test with scoring was “Life” with Eddie Murphy. I was conscious about scoring. I told my agents that I wanted to do something that was challenging. I didn’t want to do something with beats.

Fast-forward to recently. Lena Waithe and I met at Jeff Bezos’ and we talked about scoring and the app that I was working on. She told me how difficult it is in Hollywood to find someone who she could talk to about “99 Problems” by Hugo and Bach.

Then she came on my podcast, “Run That Back.” And here’s something (I did) when I was little: I would turn the sound down to movies like “The Godfather” and “Once Upon a Time in America” and re-score them in my head. And I did that with her film “Queen & Slim.” So I replayed that for her and she said, ‘Okay, you’re going to be scoring one of my movies.”

When I got the opportunity to score “The Chi,” I was so excited for it, because it takes me back to the fundamentals of my institution, which is jazz.

Were you a big fan of the show?

I was. I felt that with season one, season two, and season three, I understood the tone of the show. What I wanted to do was take that tonality and give the characters voices within the tonality of the character.

And we notice that this season with the character motifs and the guitars and piano. I’m thinking of when Kiesha is with the baby. Talk about the different instruments you used.

I’m a big fan of orchestration. I’ll hear it in my head and I’ll demo it out on my motif keyboard. The first thing I wanted to do was tackle each character and give them their voice. With Kiesha, it was about the simplicity of voicing. It was never too much because she has so much going on in her head, and there’s an innocence about her. Then there’s what she has been through as a woman, and how she has survived that has pinned her to be the ultimate hero. Whenever I was scoring her, at times, it might be a vocal, or a piano or even an acoustic guitar.

On the other hand, with Kevin, if you play it back, you’ll always hear that Miles Davis horn. It was a muted horn. That to me was Kevin’s thing. Once again, he’s this kid in Chicago, and this is how it goes down. That horn and muted sound was his friend. That was Kevin’s thing. Like you’ll always hear that muted horn. At times, Kevin doesn’t have to say anything and you just see it within his face. So I was able to translate this horn to speak for him.

The thing about composing for TV is you don’t know where it’s going to end up, so how did you navigate the score with that nothing?

When I was scoring episode one, I didn’t let anybody hear anything because I was nervous as hell, and everybody was nervous as hell. It took me a little time because I knew that I had to set the tone. You can’t set that in episode two or three, you have to set it in one.

So you build the composition around the first-tier characters, and from there, whatever they shoot at you, you’re adding to. If a new character comes in, you’re adding to that. After episode one, all we’re going to be doing is carrying this tonality of emotion from each character.

In addition to the score, you’ve also got the music soundtrack which is a big part of each episode. How did you find that balance? You see it in the transitions sometimes as they show shots of the streets where it’s a needle drop, and in another scene, it’s this familiar motif.

I worked with Derryck (Big Tank) Thornton, senior VP of Sony Music Supervisor. To think about how to get a score inside of (other) music (choices)? It’s not easy. This show is so music-driven. There’s a part of my DNA that’s a producer, and Tank is also a producer and he can give me his favorites.

It’s magical because we work together and we really like one another. Some people like to score and then just put songs in. I like to know what his songs are going to be and the magic we’re catching is, “Is this a song or is this score?”

And my score style is very unorthodox because it can either go from a Gershwin tune to Kanye West, depending on how I feel a scene is going.

I like to understand the material that the music supervisor is going to put in: Why does he feel this song should be in this scene? What’s the emotion that he’s trying to capture? The music supervisor is as important as the person scoring, because if we don’t have a gel, and we melt together, shit is really starting to sound weird. If I’m composing a scene and it’s going into a music cue, I guess I have an advantage because I understand that world — I know why this trap song or this Adele song or reggae song needs to be here. So I’m going to score backward, and don’t fight it, but complement it.

You mention trap. Why is trap music slow to get to radio airplay here in the U.S and slow to take off?

My daughter is 16 and is on all of the streaming platforms. She knows every rapper that’s in the U.K.  I think that there are two sectors within the U.S. There’s what they put on the radio and what they want to be hot. But the kids are streaming whatever they want.

Anything hot from the U.K., anything that’s hot from Brazil, anything that’s hot from America, it’s a combination of their whole playlist. I feel that the people that are getting lost are the curators that are on the radio. Those curators on the radio, as sad as it sounds, are going to be irrelevant because they’re eventually going to have to adapt to whatever is working in the streaming classes.

Earlier this year you covered Bob Marley’s “Is this Love?” You always remember the first time you heard his “Legend” album or anything of his. What’s your first memory of listening to him?

I’m from Port-au-Prince, Haiti and he’s from Kingston, Jamaica. But I come to America and I’m still a refugee. You hear my music and I’m talking about what’s happening back home and how the world needs to get better.

“The Score” had such a huge impact on music and kids today are still discovering that. Talk about making an impact on generation after generation and what that means to you.

When you’re doing something pure to the culture, it is going to outlive you and kids will always find it. Somehow we were able to find the Temptations and Marvin Gaye. That was our parents’ music.

“The Score” is timeless. It’s like when you hear Bob Marley’s “Exodus.” Our thing was let’s not do music, let’s be a movement. Everyone’s doing music, but everyone’s not a movement. Once you become a movement, they could never get rid of you, and the music becomes a part of that movement and it becomes part of every generation’s lifestyle.