UPDATED: In 2013, Softbank made a cash offer to Vivendi of $8.5 billion for the assets of Universal Music Group, about $2 billion more than same analysts thought the largest player in a shrinking music market was worth.

On Tuesday, UMG’s stock debut marks the largest IPO in the history of the music business, valuing it at more than $53 billion.

Indeed, if Universal Music Group’s spinoff from parent Vivendi was an album or single, it would be number one with a bullet, in old music-industry terms: With a closing price of €25.10 on the first day of the company’s stock launch on the Euronext Amsterdam, the world’s largest music company landed a whopping 36.5% above its initial reference price of €18.50.

The splash yields a market value of €45.51 billion ($53.37 billion), easily justifying the rosy evaluations that investment analysts floated in advance of the initial public offering.

“Let’s just say certainly multiples on publishing assets–and recorded music assets, pretty close to it–have doubled since then,” says Larry Miller, director of the music business program at NYU Steinhardt. “Although that Softbank bid wasn’t accepted, this is about a six-times improvement on what they were offering in 2013.”

Even eight years ago, Miller thought Vivendi was wise to turn down Softbank’s bid. “We had already seen a little bit of a bump. Spotify had just entered the U.S. market a year earlier. Most of what a rational investor would consider to be the dramatic scale up of the global music industry was still in front of us. You could have gotten a whiff of it in 2013 and said, ‘No, that’s okay. We’ll sit tight for a while’.”

“Vivendi comes out smelling like roses,” says Daniel Ives, managing director of equity research at Wedbush Securities. “I think the reception coming out of the gates is a feather in the cap of the music industry.”

Among reports circulated in advance of Tuesday’s launch, Barclays had floated one of the most optimistic forecasts when its London office estimated a valuation of €41.4 billion ($48.4 billion), up from its earlier calculation of €38.5 billion.

“This would suggest that Vivendi got the balance right between pushing up its value versus pent-up demand,” says Mark Mulligan, managing director of UK media analysis firm MIDiA Research. “If you are an institutional investor and want to add music to your portfolio, then UMG is as good as it gets.”

Although Monday was a difficult day for the New York exchanges, UMG’s Amsterdam offering, which launched at 3 a.m. New York time, showed “massive investor appetite for this name coming out of the gates,” says Ives. “It’s a good sign for the music sector.”

Aside from Vivendi’s 10%, a group of investors led by Chinese media giant Tencent holds 20%, which it bought in two chunks for approximately $6.6 billion, while hedge fund billionaire Paul Ackerman’s Pershing Square Holdings took a 10% stake in August for about $3.95 billion.

Amid the flurry, Morgan Stanley acquired 0.4% of Warner Music’s assets, valued at around $105 million.

“It’s tail winds for everyone who’s out there running or already investing in any of the public music stocks,” says Miller.

“In a broader shaky market, it’s a positive sign, not just for Universal but the industry,” says Ives. “I think it just shows the increased appetite for content. Right now, there’s a scarcity of content players and for Universal, I think there’s always been intrigue around the story.  It’s the right time at the right place because of the broader market dynamics.”

The obvious question becomes whether Sony follows Vivendi’s path with its music holdings.

“Not that I have any visibility into the innerworkings of the board of directors at Sony Corp. but I imagine that they have been contemplating a spinoff of the music company for several years,” says Miller. “Since Vivendi announced that it was going in that direction and viewing today as an important milestone, I don’t know how it can’t impact their strategy for the music company.”

“One day doesn’t make success but over the coming six to 12 months, depending on the success of Universal in the market, I think everyone in the industry is taking note,” says Ives. “It could put pressure on others to further monetize their music assets.”

It was Tencent’s announcement in the summer of 2019 that its consortium planned to invest to acquire 10% of UMG that initially prompted Morgan Stanley to value a stand-alone Universal Music at around $30 billion, a reckoning that not only buoyed the company’s worth, but also encouraged competitor Warner Music Group to take itself public in 2020.

In fact, despite a rocky Monday for most U.S. stocks, with the S&P 500 falling by 1.7% for its worse trading day since May 12, news of UMG’s splash lifted Warner Music’s stock by almost 10% in today’s trading, before settling in to that gain of almost 5%. Pershing Square benefited, too, as the hedge fund’s value rose by about 5%.

A difficult property market in China, concerns over how the Federal Reserve might react to rises in inflation and employment, the potential of a U.S. government shutdown over a debt ceiling showdown and the ongoing impact of COVID’s Delta variant are the factors soured Wall Street on Monday, but the prospects of a pure-play music investment in an industry that benefits from the robust revenue provided by streaming allowed the music companies to not only weather the storm, but actually rise.

“The initial valuation and the opening day close outperformed even my most optimistic assumptions,” says Miller of UMG’s bow. “When the world’s largest music company performs like this on opening day, it’s got to pull along the rest of the market.”

Setting the stage for UMG’s debut was a virtual ringing of the gong —Amsterdam’s equivalent of the New York Stock Exchange’s opening bell — by chairman/CEO Lucian Grainge, joined by senior members of UMG’s senior management. Members of the Euronext Amsterdam banged the gong live at that exchange, too, about 15 minutes before trading started. 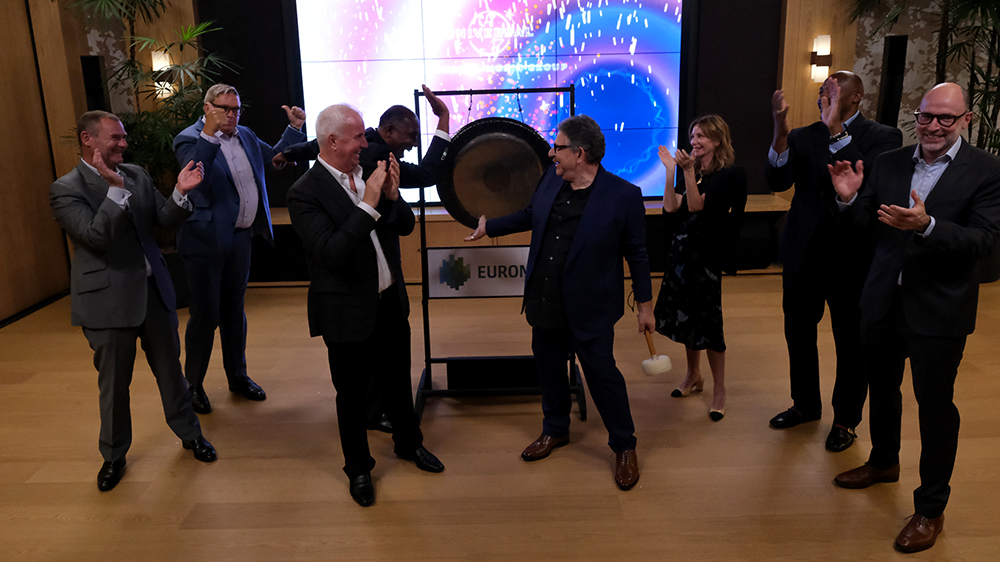 “Today’s listing marks an exciting milestone in UMG’s storied history, reflecting our position as the world’s leading music-based entertainment company and our deep commitment to our amazing artists, songwriters and partners,” Grainge declared as trading opened. “We offer our thanks to the team at Euronext Amsterdam for their work on this listing and look forward to a great partnership together.”

Although it’s difficult to compare the IPO of the market-leading rights holder in today’s music market to that of a tech startup that had not yet been profitable in a less certain industry, there is a common thread in UMG’s launch to that of Spotify, in that each company listed its own stock.

In Spotify’s case, that was because no Wall Street player was willing to take part, but Miller says that with Universal’s story and the momentum of the business, UMG simply didn’t need an underwriter.

“When you think about it, what does an underwriter do?” Miller asks. “They go out, they assure that the price on opening day is going to trade within a projected range but what the underwriters really do is line up the institutional investors to make sure those initial trades will be successful and that there is a market for the company. I think in this case, no one needed to prove that there was going to be enormous demand for this issuance.

“For long-time industry watchers it’s an historic day,” Miller adds. “Will the performance of Universal’s IPO be surpassed in the future? It’s hard to imagine how that happens, but going forward, who even knows how we’re going to be consuming music five years from now?”