Trump-Spoofing ‘Rent’ Adaptation ‘11,780 Votes’ Is the Jam of the Unfolding 2021 Political Season

"Rent" cast member Anthony Rapp calls the Gregory Brothers' irreverent use of "Seasons of Love" "fantastic." Michael Gregory tells Variety, "A parody like this only works because the original work is so embedded and connects to everyone." 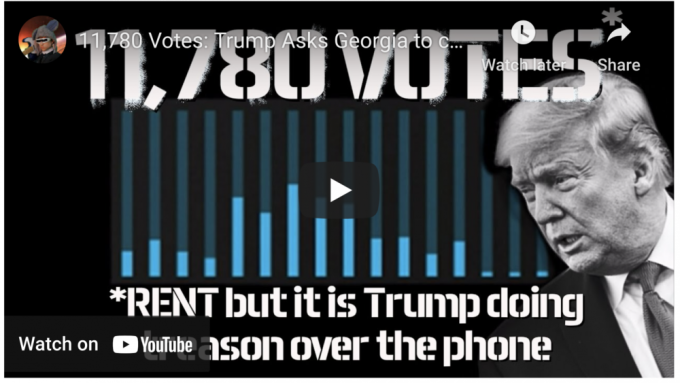 If you ever loved, liked or even hated “Rent,” there’s a fair chance that you’ve never been able to hear a set of numerals large enough to include a comma without having that musical’s signature song, “Seasons of Love,” come into your mind with its familiar chorus: “Five hundred twenty five thousand six hundred minutes… How do you measure? Measure a year?”

Fortunately, that proved true for the Gregory Brothers, the team behind the popular viral franchises Songify the News, Auto-Tune the News and Songify This. They took Donald J. Trump’s widely heard phone call with officials in Georgia, in which he made the destined-to-go-down-in-history ask “I just want to find 11,780 votes,” and were moved to set excerpts from the hour-long conversation to the tune of “Seasons of Love” for a song called “11,780 Votes.”

It makes for brilliant satire — broad, but subtle enough to get its best laugh out of a reiteration of attorney Ryan Germany simply and quietly saying the word “no” (which, to be fair, may have been even funnier in the actual phone call than it is in the song).

Michael Gregory told Variety the impetus behind the spoof, and why Larson’s work was practically made to soundtrack Trump’s attempt to coerce Georgia into “finding” such a specific number of votes.

“‘Seasons of Love’ is the quintessential high number song,” Gregory says. “There are tons of low-number songs competing for the throne — like, you might get Miley Cyrus or Feist stuck in your head with numbers under 10. But when it comes to lots of digits and few zeroes, this is the song, and that’s why we made this, because Trump kept fixating on 11,780.”

“11,780 Votes” has been met with delight and praise from fans and students of both comedy and politics (or the eternal entwining thereof). “It’s stuck in my head,” tweeted the celebrated Trump satirist Sarah Cooper on Wednesday.

The song also got a boost from one of the ultimate arbiters of “Rent” spoofs: original Broadway cast member Anthony Rapp, who called the parody “fantastic” and retweeted it with this endorsement: “I think it’s safe to say that Jonathan Larson (the musical’s late composer) would have been very proud. He was intensely political, and would have HATED Donald. I love this.”

I think it’s safe to say that Jonathan Larson would have been very proud. He was intensely political, and would have HATED Donald. I love this. https://t.co/4sidlTP50E

Says Gregory, “Obviously there’s more to the original song than that (numerical value) –– Jonathan Larson spun pure gold –– and that’s why it can keep being funny when it’s mimicking the emotional chorus in the form of the begging.”

He has a beef with Trump… for apparently being on speaker-phone during the phone call.

“Yes, the phone audio made things difficult; compare that to stuff like Trump vs. Ramp where we had crispy and unhinged rally audio,” Gregory says. “All songwriters know you put the phone/voice memo audio in the intro, not the whole song. But we implore Trump’s aides –– for the next 15 days, please hide a Neumann on the president’s desk or toilet paper rack and send high quality AIFF files.”

Of the positive outpouring, he says, “We haven’t gotten to see it all yet, but I did see the Anthony Rapp tweet and was incredibly grateful –– a parody like this only works because the original work/performance is so embedded and connects to everyone. And amazingly cool what he said about Jonathan Larson. It feels fitting that Dumb Watergate should end the show with a Dumb Parody, and Evan, Sarah, Andrew and I feel grateful to anyone sharing or listening.

Treason is better as a musical.. Go out and VOTE today Georgia! https://t.co/w1gw0BOg4r