‘We Rise’: Hollywood Comes Together for Variety’s Power of Women Dinner 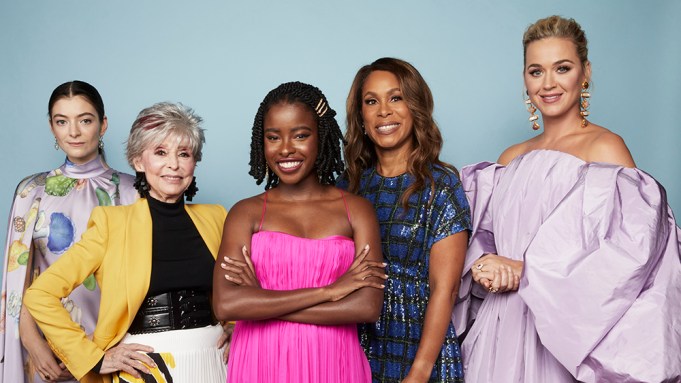 Katy Perry sang “What Makes a Woman.” Amanda Gorman recited “We Rise.” Lorde called for protection of the earth and indigenous peoples. Channing Dungey defined her power as only she could, and Rita Moreno dazzled with her 89-year-young vitality.

Variety‘s Power of Women Presented by Lifetime event on Thursday night was an intimate dinner with a big helping of inspiration for about 300 people from across the entertainment industry, who gathered under the stars on a made-to-order balmy night in Beverly Hills.

The evening, supported by Cadillac as premier sponsor, had plenty of star power thanks to the five honorees who were feted for their accomplishments and philanthropic endeavors. But another big attraction was simply the chance to mix and mingle in an outdoor setting — the Wallis Annenberg Center for the Performing Arts — with strict COVID protocols in place for Variety‘s first in-person event in more than 18 months.

The mood was jubilant as guests began streaming in for the cocktail reception. “I haven’t done this in a while,” “It’s so good to see you,” “I haven’t worn heels in a year” and variations on those statements were heard throughout the night as attendees reunited, schmoozed and, yes, even hugged.

The presentation began with a surprise special appearance by Paxton Smith, the 18-year-old woman from Dallas who made headlines by speaking out against the disturbing anti-abortion legislation recently signed into law in Texas during her valedictory address at her high school graduation in June. Smith put the consequences of the law and its shocking enforcement provision — through civil lawsuits that can be filed by anyone against Texas residents who have an abortion — in stark relief. Her voice shook as she tried to express the urgency of this law for young women in her home state.

“If I become pregnant, a potentially life-changing decision to carry out that pregnancy has been taken out of my hands and put into the hands of a stranger,” Smith said. “At the belief systems of a stranger, at the will of a stranger, I could be forced to have a child — regardless of the impact it will have on the life that I have been working towards, the life that I will be the one to live through.”

Lorde’s impact as a young woman was saluted by another young over-achiever, “Euphoria” star Hunter Schafer.

“Lorde’s debut album and song were everything. For so many young people like me, it felt like we had been found in the album and by its singer,” Schaefer said.

Lorde spoke from the heart about the privilege of being handed what she called a “golden microphone” when she became an international music sensation at the age of 16. Now, at age 24, she told the crowd she has spent a lot of time thinking about how to best use her celebrity status for good to help environmental organizations such as 350 Aotearoa, her charity of focus for Power of Women.

“When we talk about power, about the amplification of a single voice, we must also acknowledge those who do not have such amplification. Tonight, I think of the women whose birth place or skin color or socioeconomic status was always going to make it less likely that they be handed a megaphone. Or the women who climate change will affect long before it affects me. People like me are elected — whether it’s by ballot, board vote, or Instagram like. Coming to terms with the fact that your power directly correlates with others’ lack is crucial for understanding and contextualizing what you’re capable of.”

Gorman’s tribute was introduced by none other than Angelina Jolie, who saluted the young poet who stirred the nation with the poem she recited, “The Hill We Climb,” at President Joe Biden’s inauguration in January. Gorman’s words and incredible spirit at the age of 23 helped ease the pain left by the Jan. 6 riot.

“The young woman of grace, who stepped fearlessly to the podium on Inauguration Day, not just the youngest but the strongest voice we could ask for in that moment,” Jolie said.

Gorman, who put the spotlight on the nonprofit WriteGirl, explained to the crowd that she looks to poetry for inspiration in her life, so when tasked with delivering an uplifting speech, she naturally turned to her own words. Gorman’s rousing poem “We Rise” was tailor-made for Power of Women, which aims to encourage women in the industry tap into their own power networks to support good works and worthy causes.

We know that when she steps up to right a wrong/
She will fight to bring others along/
To the network, into the conversation/
Working together to change communities/
And nations for generations, our world/
Made all the stronger the longer/
Women are able to sit at the table.

Filmmaker Ava DuVernay was on hand to present the award to Dungey, the trailblazing executive whose many industry firsts include being the first Black woman to run a Big Four broadcast network and the first woman to serve as chairman of Warner Bros. TV Group.

DuVernay, who got a big boost as a director by working on ABC’s “Scandal” when Dungey was a top executive, noted her friend and colleague’s accomplishments. She paused and asked the crowd to let it sink in. “Think of the steps, think of the rooms, think of the battles, think of what it took every day to step toward that goal,” she said.

Dungey drew a big laugh with her opening line, which was a nod to her husband, businessman Scott Power. “I have been a woman of ‘power’ for a long time,” she said with a big grin and a big thank you. “I would not be standing here today” without Power’s support, she said.

Dungey is one of the most powerful executives in television, but she admitted to being overwhelmed at times when it comes to the problems of the world, even those in Hollywood’s backyard. Dungey’s Power of Women focus charity was Children’s Institute, which helps underprivileged kids throughout Los Angeles County.

Dungey told the crowd she finds great fulfillment in serving as a board member and getting involved in Children’s Institute programs.

Writer and showrunner Gloria Calderón Kellett introduced the EGOT legend who was a co-star of her “One Day at a Time” reboot for Netflix and Pop TV. Calderón Kellett recalled her joy when she realized that with a little help from Norman Lear, she would be able to land Moreno in the role that she wrote for a “Rita Moreno-type” in “ODAAT,” a character that Calderón Kellett based on her own mother. That success earned the showrunner “major mom points,” she joked.

As she got to the stage, Moreno struck a model’s pose that perfectly captured her octogenarian effervescence (she turns 90 on Dec. 11). Moreno, who put the focus on health care organization RotaCare Bay Area, recalled her childhood in New York and early struggles as a contract player in Hollywood, and compared them to the battles of the present-day at a time of deep cultural discord.

“My hope is that as more women, like the ones honored here tonight, gain positions of power and influence, they continue to keep the fires burning for those who aspire,” Moreno said. “We live in a time that requires us to be vigilant. As women, many issues require our attention in these dark days — when our leaders politicize the wearing of masks and polarize our citizens over vaccines; when in the mind of many, climate change is science fiction and healthcare is still not codified as a basic human right in a divided America.”

“None of us can take on the world by ourselves, but if there is one thing I am sure of in my 90 years, it is the power of a sisterhood of women working for change,” she concluded. “Life grows within us and we are its caretakers — we are heavily invested! I believe all women have the potential to bloom where they are planted.”

“CBS Mornings” anchor Gayle King delivered the salute to Perry, who threw the spotlight on the Firework Foundation that she runs with her sister, Angela Hudson.

“Katy has a genuine passion for protecting the earth’s most vulnerable children. She’s an advocate for women’s rights, human rights and the LGBTQ community. And she campaigned hard for both Hillary Clinton and Joe Biden,” King said. “She is the woman who stood up at the 2016 Democratic National Convention and told America that on Election Day, ‘You have as much say as any NRA lobbyist.’ And while many agree with that, for a performer at her level, believe me, there’s a price to be paid.”

Perry teared up as she extended her thanks to Hudson, as well as other members of her team who were in attendance.

“Thank you so much for keeping me focused on the greater good, holding my feet to the fire, keeping me accountable, putting all the logistics in place so that we can make an impact in our lives and other lives,” she said of Hudson. “I love you and I look up to you.” She also thanked her partner, actor Orlando Bloom, “for handling the insanity of my life.”

Perry closed out the evening with an unexpected treat. She performed her 2020 song “What Makes a Woman,” accompanied on acoustic guitar and backing vocals by Devon Eisenbarger. Another surprise moment came when Perry called Bloom up to the stage from his table to help loosen the corset of her elaborate flowing gown. “It’s a little tight — I can’t sing.”

And sing she did. Perry delivered a soulful rendition of the uptempo ballad of empowerment.