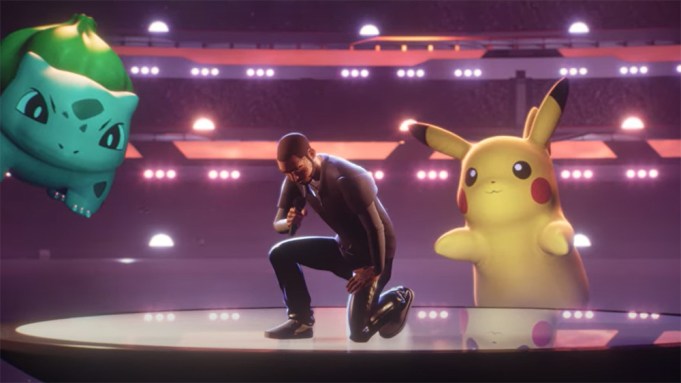 Malone had the honor of kicking off P25 Music, a year-long celebration in partnership with Universal Music Group, on Saturday — the official Pokémon Day, no less — with a virtual concert that livestreamed on Pokémon’s YouTube and Twitch accounts, and its website. The tribute was short, clocking in at just under 15 minutes, but set the stage for what the rest of P25 Music might look like: a showcase of the vast world of Pokémon while also appealing to your casual listener of the Hot 100.

And it’s not as if Malone was on stage with his rendition of the classic PokéRap (although this writer, for what it’s worth, would’ve loved to see it). It might have looked like any other virtual concert — if it weren’t for the various Pokémon that swirled around Malone throughout the show. Like the Travis Scott “Fortnite” concert that came before it, the P25 Music kickoff took advantage of its format to make the experience one that was truly unique, if not a little surreal.

The concert kicked off with an animated version of Malone (one that debuted in preparation for the event earlier this week) greeting a stadium of what looked like hundreds of thousands of pixelated fans, jumping into his hit “Psycho” as a giant Pikachu electrocuted the stage. As Malone continued to perform, he was swept away on a floating piece of land to tour various environments to find different types of Pokémon. After soaring among the Butterfree, he found himself in a dark forest, surrounded by the glowing Shiinotic and Umbreon as he transitioned into one of his biggest hits, “Circles.”

Eventually, he was also whisked away to more of the Pokémon world — from the skies with Braviary, down to the seas with Jellicent. He went on to virtually perform his new contribution to P25 Music, his cover of Hootie & the Blowfish’s “Only Wanna Be With You,” which samples the Ecruteak City theme from “Pokémon Gold and Silver” to give it that Nintendo flare, while dancing along with Charizard and Groudon.

Is there something a little bizarre about watching a cartoon Malone vibe with a legendary Pokémon while singing his rendition of a Hootie hit? Sure there is. But, in its own way, that alone is a fitting tribute to Pokémon’s long relationship with top musicians. After all, who can forget Donna Summer’s powerful vocals on “The Power of One” to cap off “Pokémon: The Movie 2000”? Pokémon has always recruited famous artists to celebrate their Pocket Monsters — Malone (who’s apparently a Pokémon fan himself, holding onto a Game Boy Color just to play the games) is just the latest in a long legacy.

After Malone returned to the stadium, closing out his set with his Quavo collaboration “Congratulations,” he teased some of what’s to come in P25 Music: new music from Katy Perry, J Balvin and “many more artists.” And it’s anyone’s guess as to which Pokémon Perry and Balvin will dance with, or which of the game’s classics they might sample in their new offerings. But it’s clear The Pokémon Company is pulling out all the stops to celebrate 25 years of one of the world’s most durable franchises.