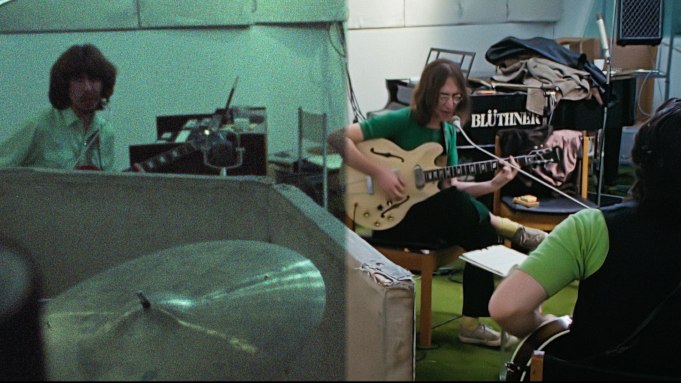 There were several hurdles Peter Jackson’s “Get Back” had to mount before the eight-hour documentary could premiere on Disney Plus, including persuading the surviving members of the Beatles to OK this pursuit, and sifting through 150 hours of audio and 60 hours of vintage footage and then restoring that delicate footage into crystal-clear quality. The last is one of the more shocking reveals from from “Get Back,” as fans have truly never seen (or heard) the Fab Four in such sharp detail, especially the previously not-so-luminous footage shot of their studio workings and legendary rooftop concert in 1969.

“With this documentary, we were limited to the film that was shot for us 50 years ago,” editor Jabez Olssen explains in an exclusive clip about “Get Back.” The featurette dives into the details of restoring the archival footage from director Michael Lindsay-Hogg’s 1970 “Let it Be” documentary.

“In 1969 that film had a quite chunky, grainy desaturated look to it. One of the purposes was to try to restore it sort of making it look as natural as possible,” Jackson says. “Suddenly the colors were just unbelievable. People say, ‘So how did you do all those colors?’ And I’m saying, we didn’t do the colors, they were there.”

Next was the sound. In this behind-the-scenes look at “Get Back” Jackson demonstrates how they isolated each track while the Beatles were recording. “To me the sound restoration is the most exciting thing. We made some huge breakthroughs in audio. We developed a machine learning system that we taught what a guitar sounds like, what a bass sounds like, what a voice sounds like. In fact we taught the computer what John sounds like and what Paul sounds like. So we can take these mono tracks and split up all the instruments we can just hear the vocals, the guitars. You see Ringo thumping the drums in the background but you don’t hear the drums at all. That that allows us to remix it really cleanly.”

Check out our full conversation with Jackson and what he discovered tracing through this treasure trove of Beatlemania. “Get Back” is currently available on Disney Plus.