Ms. Opal Lee and Pharrell Williams Discuss Their Fight for Juneteenth: ‘There Is the History and There Is the Soldier’ 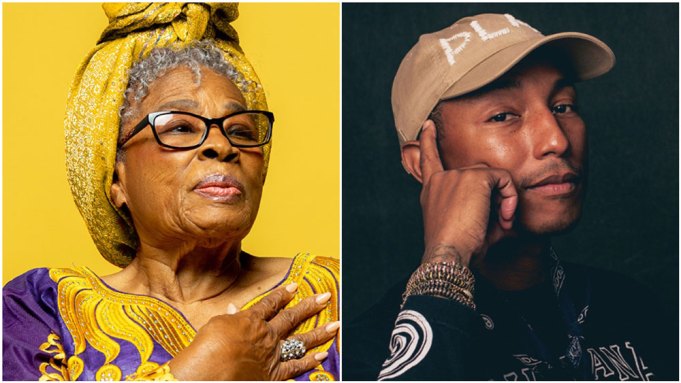 On Thursday, Ms. Opal Lee, the 94-year-old from Fort Worth, Texas was in Washington D.C. standing at the right hand of President Joe Biden during a massive ceremony where he announced that Juneteenth would officially become a federal holiday.

Lee has been fighting for — or rather marching toward — this moment since 2016, when Biden was vice president in the outgoing Obama Administration and she’d first set off on her 1,400 mile walking campaign to Washington, called “Opal Lee’s Walk 2 D.C.”

As he signed the document, Lee clutched the hand of the new VP Kamala Harris, the first Black woman to hold the office.

Biden and Harris have known Lee for some time, with one of their most memorable meetings coming while they were on the campaign trail. “I was up in their faces, giving them Juneteenth material down in Houston,” Lee told Variety. “And when [Biden] came to Las Vegas, I was there, at some affair that they had invited him to, at a church.”

“And when he hit the door, I got his hand, bless the poor man,” she recalled. “He only had one hand to shake hands with the others, cause I wouldn’t turn him a-loose; I kept telling him about Juneteenth.”

From then, Lee had known the administration was in her corner; Harris was among the senators to champion an earlier bill supporting the creation of a federal Juneteenth holiday, but that measure failed by just one vote. That bill was one of the many false starts Lee endured on the road to getting June 19 marked as an official holiday. For Variety’s Changemakers summit, Lee recounted the journey she took to finally see the date — which commemorates the end of slavery in the United States — officially recognized.

Despite her great efforts, Lee still describes herself as “just a little old lady in tennis shoes, getting in everybody else’s business.”

Joining Lee for the keynote conversation was Pharrell Williams, the 13-time Grammy-winning producer and musician, who has used his considerable platform as a superstar entertainer to join the fight for Juneteenth. Though the two have been fighting parallel battles to get Juneteenth recognized nationwide, the virtual conversation marked the first time the two powerhouse philanthropists had met.

“When you look at Juneteenth, there is the history and then there is the soldier,” Williams said. “We call Ms. Opal, ‘the grandmother of Juneteenth’ — grand, meaning in the largest way, and the mother of it, meaning her spirit of this generation has given a rebirth, people’s attention for it.”

“So, when I heard about her story and saw what it is that she was doing, I’m going to do my best to support as much as I can,” he added. “Because this is not just about us, this is about our generations to come.”

For his part, last year, Williams successfully petitioned the governor of Virginia to make Juneteenth a state holiday, emphasizing the need for people of all races to know the true history of America.

“The significance of Juneteenth is very important. Not only just because of the idea and the concept that when my ancestors were fighting in the war for the independence of this nation, they were not free themselves, as a culture.” Williams explained. “But the other part is where it starts to peel back the layers of historical whitewashing that happened in this nation and in our education, so people could really understand what Juneteenth is and why we need it.”

Juneteenth commemorates June 19, 1865, which marked the official end of slavery in the U.S. On this date, the enslaved Black people of Texas learned that they had been freed by President Lincoln’s Emancipation Proclamation nearly two-and-a-half years earlier.

“There’s a lot of things in our nation and concepts that we’ve been taught, that weren’t really historically accurate, nor were they fair. And caused all kinds of issues in our country,” he added. “[Black people] are truly owed, not only reparations but we’re also owed the truth. And not just us as the people, but all Americans are owed the truth of what actually really happened in this nation.”

That’s why Williams co-founded Juneteenth Pledge, which was started to encourage companies to commit to making Juneteenth a paid holiday for their employees in the U.S. and identifying a relevant day in their international offices that recognizes the emancipation of enslaved people, as well. The commitment also encourages companies to consider the why behind the holiday.

“There’s been a lot of companies that really understand it,” Williams said of the pledge. “The the good thing about today is that the consumer is much more educated, and they’re much more opinionated, than they ever were before.”

“Before, you just believed every advertisement that you saw and every politically-slanted news report. It’s no longer the case,” he explained. “People vote with their remote controls and they vote with their wallet, their credit cards. That’s one of the reasons why I attribute the swift change in a lot of these big corporations to acknowledge it because they know that their consumers are looking at them like, ‘What are you saying?’”

Lee and Williams also discussed what gives them the strength and drive to continue their mission.