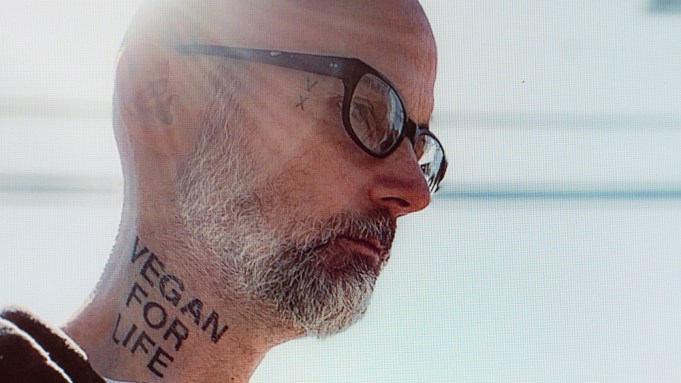 Musician, DJ and director Moby is getting the documentary treatment in a new behind-the-scenes film. “Moby Doc” is described as a surrealist look, narrated by Moby himself, as he reflects on his turbulent personal life and iconic music from underground punk bands to chart-topping solo artist, and from struggling addict to vegan activist.

Directed and edited by Rob Bravler (“Cure for Pain: The Mark Sandman Story”), the film features interviews with David Lynch, David Bowie and Shepard Fairey along with concert footage, utilizing a unique blend of re-enactments, interviews, and archival footage.

Aside from showing Moby the artist, the documentary will give audiences a look at Moby the activist, someone who has long championed animal rights, and a man whose traumatic childhood shaped him.

Moby, who has sold over 20 million albums worldwide, is best known for his 1999 release, “Play.” Although it was his fifth album, “Play” was his first to go gold, let alone double-platinum, and propelled him into being a figurehead of the electronic dance music scene. Tracks from the album were licensed for advertising, film or TV as music supervisors became early adopters of his music.

Despite his musical success, the artist has spent much of the last few years dedicated to philanthropic work. Speaking with Variety last year, he said, “Being a materialist doesn’t make me happy — what are the alternatives? To me, the alternative was to live a relatively simple life, and enjoy the work that you make, and if you can, use your platform and money to help organizations who are trying to fix problems.”

The new film is co-produced by Marty Bales, Eric Harle and Dave Tomberlin. Moby serves as executive producer. The documentary will be released on May 28 and distributed by Greenwich Entertainment, which acquired the U.S distribution rights.