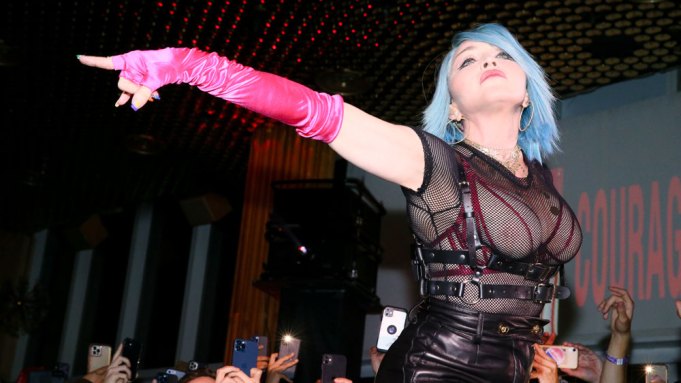 A two-song performance by Madonna was the big surprise on Thursday night during a Pride party in New York City.

The evening, which took place at the Meatpacking District’s The Standard hotel, was billed as Pride x Boom with appearances by Kaytranada and deejays Honey Dijon, Misshapes and Eli Escobar.

Madonna, dressed in Material Girl gloves and “Not My President” leather straps, made her appearance in the Boom Boom Room at about 1:30 a.m., performing “Hung Up” and “I Don’t Search I Find” from the lounge’s bar top.

At the top of the Standard, a heavy gold-plated door separates Le Bain — the Standard’s night club — from the hotel’s exclusive lounge, which Thursday night housed hundreds of New York pride guests awaiting Madonna’s performance. Outside the door, a deep crowd of people fought to make their way into the party, where terms like deep red with “No Fear,” “Courage” and “Resist” were projected around the room; earlier in the evening, she had premiered a video bearing that title a few dozen blocks uptown on Times Square jumbo screens.

Free bottles of champagne were offered to anyone willing to wait their turn.

“To not celebrate pride without people would have been a tragedy for me,” Madonna said to the crowd, decreeing the return of New York City nightlife and voguish, raucous parties of legend, the likes of which New York City hasn’t seen for 15 months. “Take nothing for granted because you never know what’s waiting for all of us around the corner,” she said. “Learn to love yourself.”

“Everybody in this room is here because you’ve been successful and are making a difference,” said Quinto during the auction. “And now you’re here at the best fucking pride party, in the best fucking city in the whole fucking world. Now it’s time to make sure that other people get to be here, too.”

Teasing the evening on Instagram earlier in the night, Madonna wrote, “We are here to celebrate our LGBTQ+ brothers and sisters, support some amazing Queer initiatives, declare Pride NY weekend open and the return of NYC.”