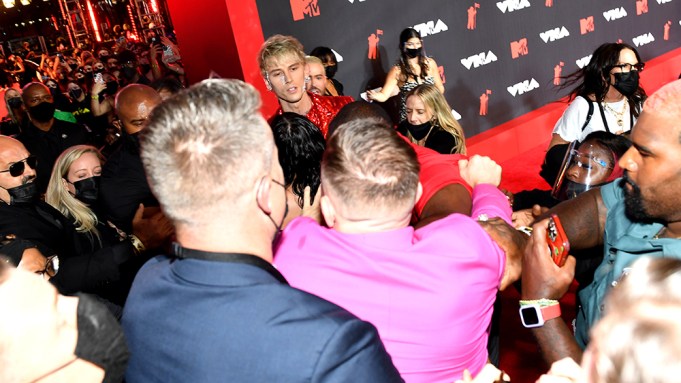 Machine Gun Kelly and UFC Champ Conor McGregor got into a scuffle just before the broadcast of the MTV Video Music Awards at Brooklyn’s Barclays Center, according to multiple reports.

Shortly after, MGK, who was nominated (and later won) for his hit “My Ex’s Best Friend” featuring Blackbear, stopped by Variety‘s red carpet spot where he was asked what happened, but declined to answer (watch video above).

TMZ reports that the skirmish happened after Kelly refused a photo with the Irish UFC fighter. Sources are quoted as saying that McGregor stumbled, spilled his drink then threw the remainder at Kelly.

An eyewitness confirms parts of that account, telling Variety that McGregor was trying to approach Kelly, who was standing in line for red carpet photos, when the UFC champ was stopped — and pushed — by the artist’s security. Continuing to press forward, Kelly “sort of snarled” at McGregor, says the observer who noted that McGregor, walking the carpet with a cane following a recent injury in the ring, “fell back and dropped his cane.”  He held onto most of his drink, though, yelling something along the lines of “that fucking punk punched me.”

McGregor’s handlers were “begging him” to let it go, and it seemed Kelly and girlfriend Megan Fox did. Shortly after, Kelly and Fox — wearing a Mugler dress — walked the carpet posing for photographers.

Prior to the show, Kelly shared a picture of the couple dolled up for the evening with a sweet caption: “I found a mermaid.”

McGregor, dressed in a pink sports jacket, black frilled shirt and black pants, walked soon after with girlfriend Dee Devlin. He was at the VMAs to present the artist of the year award to Justin Bieber.

A rep for McGregor denied that a fight had transpired, telling Page Six, “Conor only fights fighters.”

Kelly was scheduled to perform his new song “Papercuts” with Travis Barker about halfway through the awards show, but just as stage crew was readying the production, it was pushed back to the end of the broadcast. It’s unclear why the last-minute change was made, or whether the red carpet scuffle had anything to do with it.