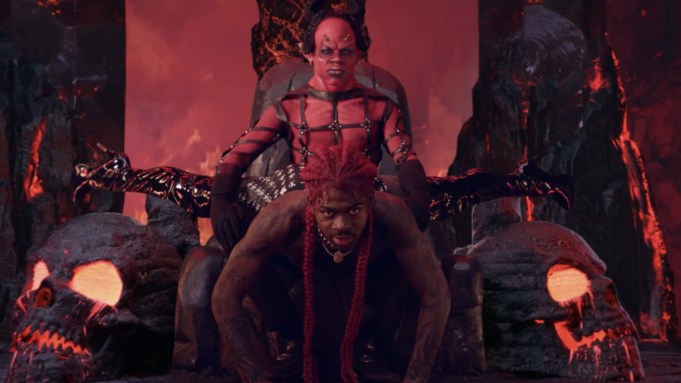 I don’t think it’s possible for me, a 41-year-old gay man, to overstate just how monumental it was to see a 21-year-old gay man express his sexuality on exactly the same terms — and at the same level of fame, success and media attention — his straight counterparts have enjoyed for decades.

From the stripper pole, short shorts and pelvic undulations to the deliberatively provocative religious imagery, Nas evoked everyone from Madonna and Janet Jackson to Nicki Minaj and Megan Thee Stallion, and in doing so proclaimed that he has every right to be just as brazen about his desires and titillating about his body. Other out music stars — Frank Ocean, Scissor Sisters, Adam Lambert, Olly Alexander, Orville Peck — have waded into the same territory, most recently Troye Sivan with his (self-proclaimed) bop about bottoming, “Bloom.” But no music star who’s achieved Nas’ chart-topping, record-setting level of success and also come out has attempted anything on the scale of what Nas is doing with “Montero.”

Instead, historically, gay men who’d reached a similar career pinnacle at roughly the same age have either had to stay in the closet and sing about women — see: New Kids on the Block’s Jonathan Knight, NSYNC’s Lance Bass, Ricky Martin — or come out after establishing themselves and keep their sexuality in vaguely PG territory (if that). See: Elton John, George Michael, Michael Stipe, Mika and, again, Ricky Martin.

I do not blame any of these men for making these choices, if indeed it’s even possible to call them choices given the pervasive homophobia of the music business at the time and the world at large. All of these men have made music that I’ve loved, and I’ve celebrated when they were finally able to come out, while also clocking the marked downturn many of their music careers took after they did so. When One Direction’s self-conscious flirtation with each other only magnified their fame — and their sex appeal to tween and teen girls — I marveled at how these lads managed to flip the boy band script on gay panic while also wondering whether an A-list queer music star would ever be able to just actually flirt without quotation marks attached to it.

Cut to Lil Nas X, grinding on Satan’s lap in thigh-high stiletto boots, an image that made me feel old and young again all at once. When debuting the video on Thursday night, Nas also posted a letter to his 14-year-old self, with words that resonated deeply for me, and I suspect many other LGBTQ people.

After decades of transposing our desires onto the fantasies projected by straight (or occasionally bisexual) women, here’s Lil Nas X, providing gay men a sex idol all their own. The video is already nearing 5 million views in roughly 24 hours; any clutched pearls have been far, far outmatched by fists pumped and streams run on repeat. I cannot wait to see what he’s up to next, and it seems I am far from alone. That’s fabulous news for Nas and for any other queer artists who wish to follow in his footsteps. It’s also, perhaps, bittersweet for the queer artists who’ve come before Nas, who could have hit these same heights would they were ever afforded the chance.