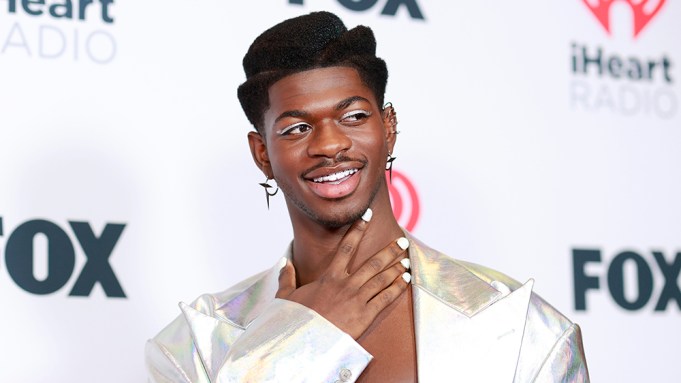 Showstopper Lil Nas X turned eyes on the iHeart Radio Music Awards red carpet in an iridescent suit and platform white boots — another bold fashion statement for the singer who is fresh off a buzzy “Saturday Night Live” performance that culminated in the splitting of his pants.

He took a moment to address the wardrobe malfunction with Variety‘s Marc Malkin.

“I was quite terrified, but I was like, ‘The show must go on… I hope my goodies aren’t on TV right now,'” he confessed.

The pants tear came as a result of Lil Nas X dropping it low on a center-stage pole while singing “Montero (Call Me By Your Name),” a song that has already spurred a fair amount of controversy with its music video that features the artist giving Satan a lap dance.

“I think they’re still in New York being shipped here,” he said of the pants’ whereabouts. “We have to put them in a museum one day.”

The iHeart Radio Music Awards is among the first major events to hold an in-person ceremony. With the prospect of more performances on the horizon, Lil Nas X has his eyes on prime opportunities such as this one.

“Honestly, I want to perform here,” he said of the awards ceremony. “I wish I had set that up tonight. But next in line, I would like to perform at maybe the BET Awards.”

The 22-year-old is set to release a new album, “Montero,” this summer. He has already laid the foundation for his debut with two successful singles, including the tender “Sun Goes Down.”  He anticipates his next release will bring something new.

“I want to do something in a different lane that’s crazier,” Lil Nas X said of what he envisions for his next music video. “I’m not sure what yet… “But that’s for when I make a main single or something.”

Lil Nas X is quickly becoming an gay icon. When asked if he has a message for LGBTQ who may still be struggling, he said, “I say, ‘You fucking rock. Fuck everybody else.”