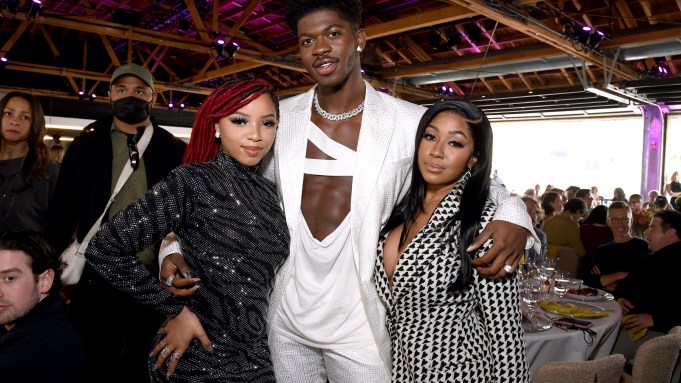 Lil Nas X was honored with Variety’s Innovator award at this year’s Hitmakers event on Saturday. Singer Chloe Bailey presented the award after introducing the artist behind “Industry Baby” and “Montero.”

“There could not be a more appropriate honor for Lil Nas X. He has embodied the spirit of courage while also representing the culture authentically and beautifully. Maybe once in a generation an artist comes along and literally changes the world for the better,” Bailey said. “By being exactly who he is and commanding attention, by creating a universe that is both undeniable and exceptionally entertaining, he’s kicked in the door.”

“Yes, he has smashed records. Yes, he has broken down barriers. He delivers creatively like no other and that makes him so deserving of this: innovator of the year,” she continued.

Lil Nas X took to the stage to accept the award, beginning his speech by joking, “I had a lot of fun pissing people off. I’m kidding, I’m kidding.”

“This year took a lot of mental strength from me to be able to keep pushing after my debut put me in such a high place so quickly,” the musician continued. “I came out. I was myself. I did what I needed to do. I put effort into every single part of my career. I’m simply thankful for this award. I’m thankful for this year.”

“Thank you for my team. Thank you, Ron Perry. Thank you, Jack Harlow in the audience right now… Thank you guys, I love you,” Nas finished.

In an interview with Variety, Nas discussed how he singlehandedly revived the event music video with his internet-breaking visuals for “Montero (Call Me by Your Name)” and “Industry Baby.” “I’m the product of the internet, so now that I’m here, I can use all these tools to my advantage,” he said. “I feel like I’m in control of my career. I’m not bowing down to what someone on my team says. I can’t be successful without being creatively free.”

The Hitmakers event, tied to Variety‘s Dec. 2 Hitmakers issue, honors the writers, producers, publishers, managers and executives who helped make — and break — the 25 most consumed songs of the year. Along with Lil Nas X, other artists being honored at the event are Harlow for hitmaker of tomorrow, BTS for record of the year, Billie Eilish and Finneas for best film song of the year, Olivia Rodrigo for songwriter of the year, Lana Del Rey for the decade Award, Normani for collaborator of the year, Polo G for the rising star award presented by Amazon Music, Kali Uchis for the crossover award, Glass Animals for group of the year, Walker Hayes for sync of the year and City Girls for the Future Is Female Award presented by Motown Records.