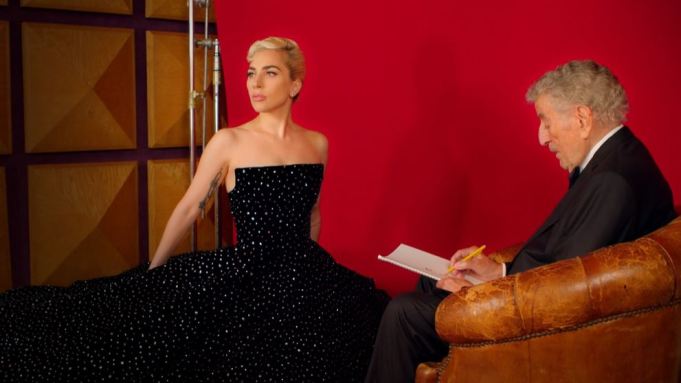 Lady Gaga is reduced to tears as legendary singer Tony Bennett sits down to sketch her in a new behind-the-scenes video for their “Love For Sale” collaborative album, out today. “I was thinking of doing a sketch of you for the cover, a nice, clean picture of you,” he says.

Bennett beautifully sketches Gaga in what becomes the center of the artwork for “Love For Sale,” set to the song “I Concentrate On You.” “It’s beautiful, it’s so beautiful. It makes me cry,” the Oscar-winning actress tells Bennett. (Click above to watch the video.)

The album includes “Do I Love You,” “I Get a Kick Out of You, “I’ve Got You Under My Skin” and “Let’s Do It,” a standard that Gaga says is “one of my favorite Cole Porter songs ever written.”

Earlier this week, the album trailer revealed further behind-the-scenes footage. In that video piece, Gaga says she received a call from Bennett soon after the release of their 2014 album “Cheek to Cheek,” proposing another project. As Gaga recalled: “Tony called me right after. I think it was the next day, after the record was released. He said, ‘I want to make this Cole Porter record with you.’”

Almost six years later, the two, who recently sold out a pair of concerts at New York’s Radio City Music Hall, are putting their promises to wax, releasing what will be the final studio recording of Bennett’s career and the culmination of Bennett and Gaga’s decade-long history together.