Katy Perry Tears Up at Variety’s Power of Women, Thanks Orlando Bloom for ‘Handling the Insanity of My Life’ 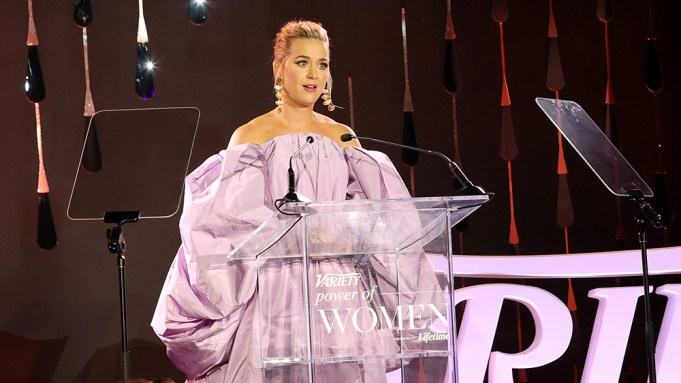 Katy Perry, representing her own Firework Foundation, which aims to reach underserved communities through the arts, took the stage at Variety‘s Power of Women event on Thursday, Sept. 30 to perform “What Makes a Woman” after accepting the honor from CBS News personality Gayle King.

Said King: “I could stand here and rattle off a whole lot of stats about what makes this next honoree one of the most influential women in the music industry—maybe let you know that she’s the only female artist ever to have five number one singles (from a single album) on the Billboard Hot 100; or I could tell you that she headlined the highest-rated Super Bowl half-time show of all time; or that she’s racked up a cumulative 50 billion streams—that’s billion with a capital “B” people!— Or I could maybe mention that she was the first to reach 100 million followers on Twitter. I could even remind you that she’s the only woman in history to wear a giant crystal chandelier to the Met gala—and don’t even get me started on how she rocked the cheeseburger dress… you just know Anna Wintour wanted one for herself! But all of that is what Katy Perry does, and I’m here to tell you about who Katy Perry is.

Katy has a genuine passion for protecting the earth’s most vulnerable children. She’s an advocate for women’s rights, human rights, and the LGBTQ community. And she campaigned hard for both Hilary Clinton and Joe Biden. She is the woman who stood up at the 2016 Democratic National Convention and told America that on election day, “You have as much say as any NRA lobbyist.” And while many agree with that, for a performer at her level, believe me, there’s a price to be paid.”

The foundation, which counts among its partner organizations the Boys & Girls Clubs of Los Angeles, hosts a summer Camp Firework program for kids in sixth to eighth grades that Perry herself attends. Her sister Angela co-created the organization.

Said Perry: “This honor also belongs to my sister, Angela, my co-founder at the Firework Foundation, the ultimate champion for access and equal opportunity for children. Thank you so much for keeping me focused on the greater good, holding my feet to the fire, keeping me accountable, putting all the logistics in place so that we can make an impact in our lives and other lives. I love you and I look up to you.”

Perry also name-checked Ngoc Hoang-DelVecchio, from her management team. “We always cry,” said Perry of Hoang-DelVecchio. “She is the logistics queen, a woman who has helped guide me, sacrificed for me and championed my vision for over 12 years. Your dedication is profound and worthy.”

Shouting out Universal Music Group attendees Michelle Jubelirer (president and COO, Capitol Music Group), Ambrosia Healy (head of media strategy and relations) and Kristen Kanopka (senior director, publicity), Perry added, “Thank you, ladies, so much for giving me the platform to allow me to do what I love every day. And we know it takes a village and I’m privileged to have mine made up of so many intelligent, dynamic women.”

Perry also praised her fiance, Orlando Bloom, for being “an incredible father [and] an example to our greatest gift ever, our daughter Daisy — a future powerful woman. I pledge to you to do my best to be an example of one, to never put limits on your dreams, to lead with love, never through fear, and to always be your lighthouse in any darkness. … Lest we forget, behind every great woman, there is a great man way to my beloved partner. And I’m sure whether I like it or not, Orlando, a man that is a friend and an ally to women all around the world. Thank you for handling the insanity of my life.”

In what was among the most talked-about moments of the night, Perry asked Bloom to loosen her corset so she could belt with her signature gusto.