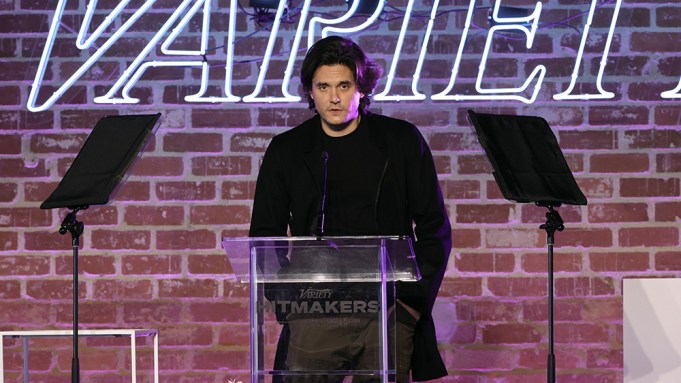 Grammy-winning musician John Mayer might just have a future in standup comedy.

While presenting the label of the year award to Columbia Records’ Ron Perry and Jenifer Mallory at Variety‘s Hitmakers event on Saturday, Mayer had the audience in stitches with his nearly four-minute speech. Taking the podium after decade award winner Lana Del Rey, who said in her speech “lovemaking is my legacy,” Mayer started his remarks by joking, “I just want to say before I begin: Lovemaking is my legacy as well.”

While Mayer listed out Columbia’s achievements this year — mentioning Lil Nas X’s “Montero,” the Kid Laroi’s “Stay” and Adele’s “Easy on Me” — he gave a special shoutout to BTS fans, saying: “BTS ARMY, what’s up? I’m just trying to trend. Checking it in the car home.”

Of course, Mayer mentioned his own album that released this year via Columbia, “Sob Rock.” But instead of touting its success, Mayer delivered a light roast to himself while comparing his streaming numbers to those of BTS: “To my album ‘Sob Rock,’ which has shattered local streaming records. Huge hit in Canoga Park.”

But Mayer’s biggest laugh came at the end of his speech, when he pulled out an envelope as if he was presenting at the Grammys. “They understand, and have taught me since, the power of a strong roll out, of an exciting event,” Mayer said of Perry and Mallory. “And in the spirit of an exciting event, the nominees for label of the year are…”

He then proceeded to read the names of executives from Warner Bros., Republic Records, Interscope and Capitol Records, before opening the envelope and announcing the obvious winner: Columbia.

But it wasn’t all jokes — Mayer also delivered some earnest words about his work with Perry and Mallory at Columbia.

“We artists are unreasonable, that is our job. We catch ideas we can’t let go of,” Mayer said. “Ron, Jen and the rest of the team have adopted a working relationship that I think is the most open-minded and fun it’s ever been in my 20 year career as a Columbia recording artist.”