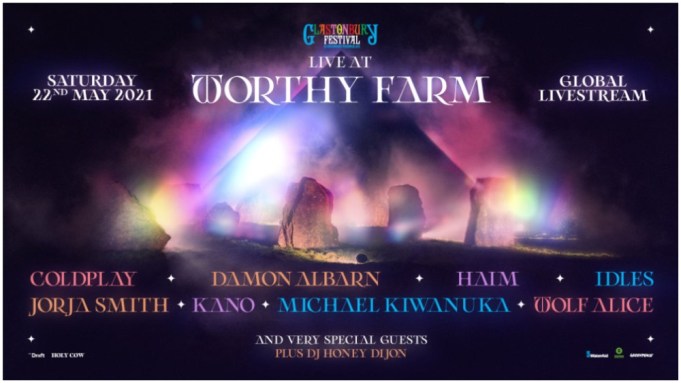 The festival also promises a number of surprise unannounced performances. Shot by Grammy-nominated director Paul Dugdale, the event will be filmed across the festival’s Worthy Farm site at landmarks including the Pyramid Field and the Stone Circle.

The five-hour program will be streamed across four separate timezones with staggered livestreams, including U.K., Europe, Africa and the Middle East, North America East Coast and Central and South America, North America West Coast on May 22, and Australia, New Zealand and Asia on May 23.

The concert will be accessible only to ticket buyers and tickets are on sale now at £20, €23, $27.50 and AUD$35. A limited edition lineup poster for the event is also on sale, with proceeds going to Stagehand, the live-production welfare and benevolent fund, which is helping crew who have fallen through gaps in the U.K. government financial support during the pandemic.

“After two Glastonbury cancellations, it brings us great pleasure to announce our first online livestream, which will present live music performances filmed across Worthy Farm at landmarks including the Pyramid and, for the first time ever, the Stone Circle,” festival organizer Emily Eavis said. “It will feature a rolling cast of artists and performers who have all given us enormous support by agreeing to take part in this event, showing the farm as you have never seen it. There will also be some very special guest appearances and collaborations. We are hoping this will bring a bit of Glastonbury to your homes and that for one night only people all over the world will be able to join us on this journey through the farm together.”

The show will be co-promoted and produced by U.K. livestream business Driift, who have hosted livestreams for artists including Laura Marling, Nick Cave, Biffy Clyro, Niall Horan and Kylie Minogue, and BBC Studios Productions.