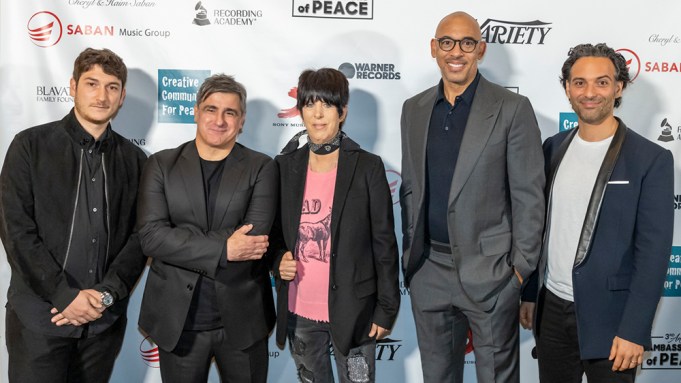 On a cool, fall October night, the Creative Community for Peace (CCFP) held its third annual “Ambassadors of Peace” fundraising event to a backyard full of smiles. After taking a year off for the pandemic, the music industry came out in force to support the organization that has tried to counteract calls to boycott Israel by encouraging artists and creatives across entertainment to learn more about the region and performing in the country.

“Music is a powerful force for diplomacy,” said publishing vet David Renzer, co-founder of CCFP with EA’s Steve Schnur (the latter was not in attendance), revealing the evening will raise more than $300k for the organization. “We’re trying to use the arts to build those bridges, to remind ourselves of those commonalities and symbiotic relationships.”

The previous two sold-out events were held at the Hancock Park home of entertainment attorney Aaron Rosenberg and TV producer Danny Rose, and the home of lawyer Gary Stiffelman and wife Carmen, but this year’s edition was at the Beverly Hills residence of honoree Ben Madahhi’s parents, his father — a cardiology doctor at UCLA who fled Iran for the U.S. in 1975 — and mother beaming on the black carpet.

“This has a deep meaning to me because I grew up an Iranian-American Jew in Los Angeles, with both Muslim and Jewish friends,” said Ben Madahhi from the podium. “Music has the power to heal, to unite people and eliminate divisiveness. My parents raised me to have respect for people of all different backgrounds and cultures. My mission has always been to make records that uplift and unite people, have a positive impact.”

For honoree Diane Warren, the appeal of the organization was simple. “Any organization that is about peace and supports Israel, I’m good with,” said the award-winning songwriter. “Anti-Semitism always seems to rear its ugly head, and it seems more prevalent than ever.”

Ari Ingel, who quit practicing law to become director of CCFP, noted that, due to the pandemic, which had people glued to their computers, there was a rise in the kind of misinformation which fuels prejudice.

“We have a great deal of work to do,” insisted Ingel. “There are more people than ever spreading misinformation and outright lies. Our goal is to educate the industry and the public to counter those falsehoods.  Unfortunately, it’s far from being eradicated.”

The organization was founded against the backdrop of musicians like Roger Waters, formerly of Pink Floyd, advocating for the policy of BDS (which stands for boycott, divestment and sanctions), and Lana Del Rey pulling out of a scheduled festival performance there after much outside pressure.

“The last Gaza conflict between Israel and Hamas brought out a lot of haters,” said Ingel. “Events like this encourage an open discussion of the issues, and how we can use our voices to effect positive change.”

Austin Rosen, whose Electric Feel Entertainment represents management clients like Post Malone, 24KGoldn and Iann Dior — Dior showed up in support along with hitmakers Louis Bell, Billy Walsh and Blake Slatkin — is planning on opening a recording studio in Tel Aviv and promises his acts (like Post Malone) will tour there. “It’s all about awareness, making people understand it’s OK to play there,” offered the press-shy entrepreneur.

Grammy chief Harvey Mason Jr., who was introduced by his Recording Academy colleague Jimmy Jam (pictured above) — almost unrecognizable after a 120-pound weight loss — said of the honor:

“For me, it’s bringing people together, coming from a place of peace and love,” said Mason jr., whose efforts to diversify his organization’s membership and making the Grammy voting process more transparent have not gone unnoticed. “Political and religious beliefs may be all over the map, but my goal is to be productive, make things better rather than dividing and separating us from one another.

“I sympathize with any group that’s been discriminated against or persecuted. I try to support unifying, not battling one another. The power of music can unite us in a time where it’s most needed.”

The individual speeches were preceded by a taped message of support from Clive Davis, then followed by musical performances from Columbia Records artist Clinton Kane, a singer-songwriter who played his hit “Chicken Tendies,” followed by Deborah Cox who delivered a pitch-perfect rendition of “Imagine” that fit the hopeful mood.

It was left to Jimmy Jam, admitting he was just glad to be around people again, to sum up the evening’s goals. “What’s important is music and community,” he told Variety. “Music heals, it’s the soundtrack to our lives. Music is uplifting, it’s a divine art. It just makes things a little better.