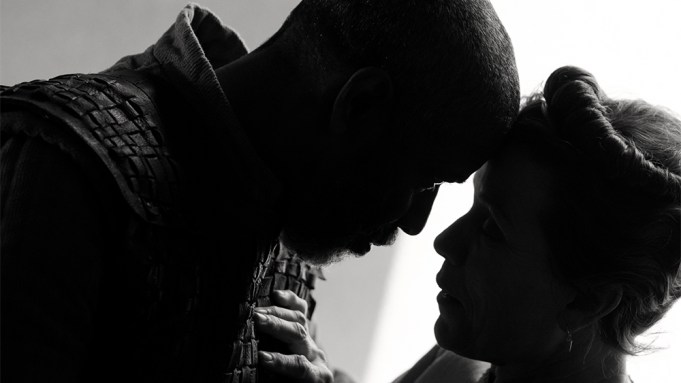 Carter Burwell has scored 19 of the movies of Joel and Ethan Coen, including such classics as “Fargo,” “The Big Lebowski” and “No Country for Old Men,” yet he’s never been nominated for a major industry award for any of that music. That could change this year with his dark and disturbing sounds for Joel Coen’s “The Tragedy of Macbeth” starring Denzel Washington and Frances McDormand.

What did Joel say he was looking for in the music?

One thing he knew he didn’t want: He didn’t want it to be Scottish. It’s all shot on soundstages, and fairly surreal ones, and that’s the way I took it – not as a physical reality but as a psychological reality. He was interested in the way the play suggests certain genres of film: thriller, horror, psychological drama. He wanted the music to serve the function that music does in those genres, making you uncomfortable, driving the story forward, getting you ready for a big denouement.

How would you describe your soundscape?

We were recording during the pandemic, and that did help push me toward the string orchestra. The silky, gray-black tones always evoke “Psycho,” one of my favorite film scores. The string sound for me fits that type of film: a black-and-white horror film. I tried to look for novel textures: the basses are doing biting attacks, some of the cellos are doing bouncy vibratos.

Being Shakespeare, there’s a lot of dialogue. How did you decide where to add music and where to remain silent?

We came to the concept that the dialogue itself is like a melody, and the score would be the accompaniment to it. That led me to think about having the music in the lower two octaves of the orchestra, mostly cellos and basses, where it wouldn’t interfere with the dialogue. And there’s a solo fiddle that goes off pitch a lot; it’s disturbing and a little witchy.

The big monologues mostly don’t have music under them because these actors are such magnificent solo instruments. For Fran’s “out, damned spot” speech, you could have had music under it, but her performance of that monologue goes from pianissimo to fortissimo.

Were there any musical ideas that didn’t make it into the final score?

I wanted there to be a love theme for Macbeth and Lady Macbeth. Maybe more than any other version of this play, those two actors do convey that. They’re a team, there is a tenderness between them. I did want to play that, and I did have a theme for it. But in the end, Joel found it just too distracting. The film and the music have to stay in a disturbing tone.